Does Jesus Really Need You to Lie For Him During COVID 19?

Recently I have noticed that one rather awful aspect of Evangelical Quiverfull culture is thriving in these quarantine times, telling the most untrue and easily debunkable lies to make a ridiculous point for Jesus. I am seeing so many people we cover here doing just this. And they aren’t the only ones.

Last night as my husband was channel surfing he stopped on Fox News. We both dislike the channel, but he will sometimes watch just to see what they are saying, to contrast it with BBC World Service, Al Jazeera, and CNN which we routinely watch. I have to laugh seeing Tucker Carlson, or Sean Hannity bloviate like sentient rabid dogs. Once I witnessed Carlson get two countries completely confused for one long rant.

What we saw last night was one of the female anchors, or as I call them “Attack of the Clonies”  because they all look the same, riffing on the situation with masks and the Coronavirus. She was openly promoting some of the easily debunkable lies that have been promoted in the video “Plandemic” about masking up. It was easily one of the most irresponsible pieces of journalism I’ve seen in awhile. When Carlson is confusing the Dominican Republic with another Central American country, or Hannity is spewing out hate for James Comey they are merely mining a vein of outrage among a certain population. They aren’t directly harming their audience. But this lady was doing and saying something that could have devastating consequences for real life people.

The main audience at Fox News is older, making them far more at risk for Coronavirus. These are the same folks that had to be told recently not to drink bleach and Lysol after that Trump press conference. They’ll believe any old conspiracy theory and angrily march out to carry out these things that lead to more illness for everyone. I was unable to find a clip of this in the light of morning, but it happened late last night.

But this is a super common theme in Quiverfull. Yesterday we saw it in Larry Solomon of Biblical Gender Roles promotion of another banned conspiracy video, wronged stats, and demands that the U.S.A. open  up because “Feminism”? Larry lying for Jesus.

Nancy Campbell of Above Rubies has been at it hammer and tongs making all sorts of claims about the pandemic and trusting in Jesus. More lying for Jesus. Nancy has also fallen down the unscientific “Plandemic” hole, saying this about masking:

“And it seems they love to get masks on their people. Why? Even when WHO and CDC don’t recommend masks and it is known that wearing a mask gives increased risk of respiratory illnesses and viral infections. Masks become a hotbed for microbes to thrive. But of course they are a great picture of silencing the people! Covering up their freedom of speech! Dumbing them down!”

Sorry, Nancy but the only dumbing down I see is in your specious claims that harm others. More lying.

Doug Wilson of Blog and Mablog has turned into a government conspiracy theory word salading bloviating machine against any common sense about our pandemic. Add in the toxic Dorr brothers manipulating others to make fat stacks of cash during the pandemic. Debi Pearl using the pandemic as a promotion for her brain book, and to promote her daughter’s herb company. But none of these people are  making up fake narratives to illustrate some self-involved martyrbation scheme or extra Biblical point, like she who shall not be named is doing in this time. From the infected Roach Coach secretive chat room: 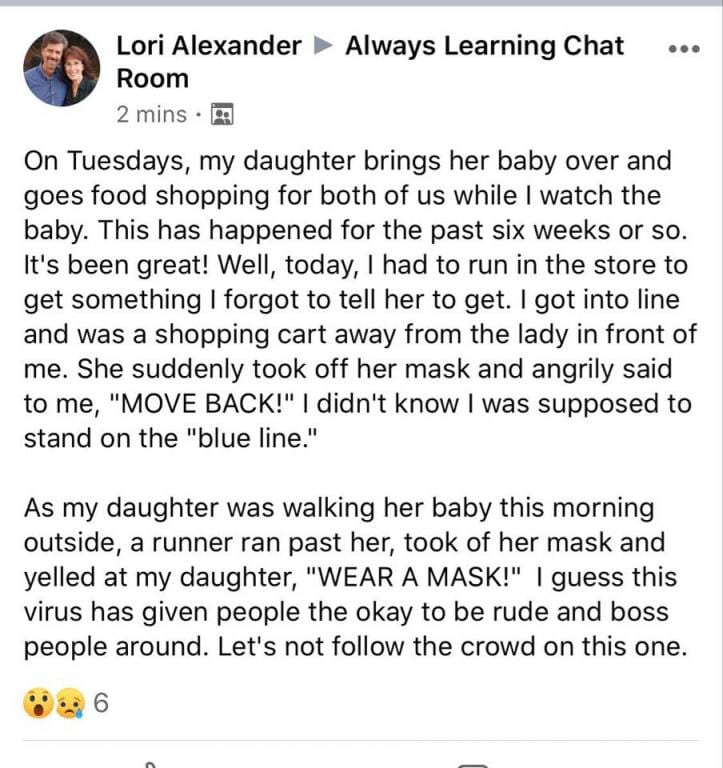 Well, you know what they say. Pictures or it did not happen. Here’s the thing, I have seen people at the grocery store requesting that others step back from them. I’d done it myself in a stern voice to the unthinking while masked. The mask does not prevent you from stern loud talking, or yelling at anyone else. No one, literally no one, unmasks to fuss at others. Pure fabrication from a childish brain for dramatic effect. This is just such an unlikely fabrication constructed only to make people hate masking, like everything else spewing out of this woman’s salad-hole.

Also her own husband spoke to someone we know, and we have the screen cap of him saying they have not seen any of their grandchildren in many weeks because of the COVID 19 health suggestions. So she would not have been babysitting either. More lies.

She followed it by posting on twitter than you are to be kind to others being mean because of COVID. Says two different things in two different places. But, what is hidden does get exposed to the light, at least that’s what the Bible says.

Here’s a twoer from the Roach Coach, not really COVID related, but it exhibits this woman’s ability to bash two different Christians at the same time, Amy Grant and Jenn Hatmaker. That takes some mad skillz. 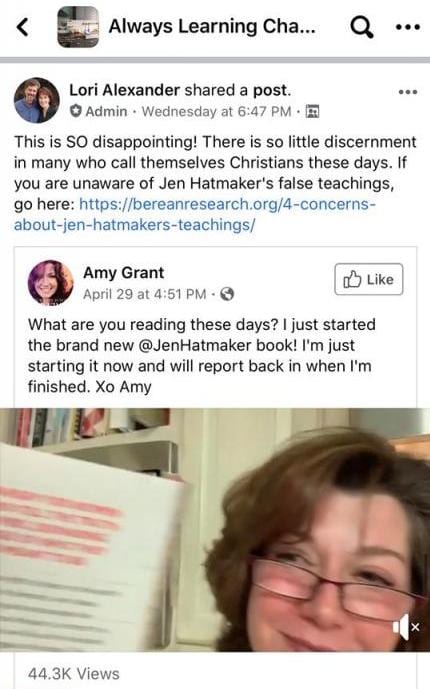 Here she’s promoting another lie, that hand sanitizers contain antibiotics. They haven’t for quite some time now. Most are alcohol based and non toxic. 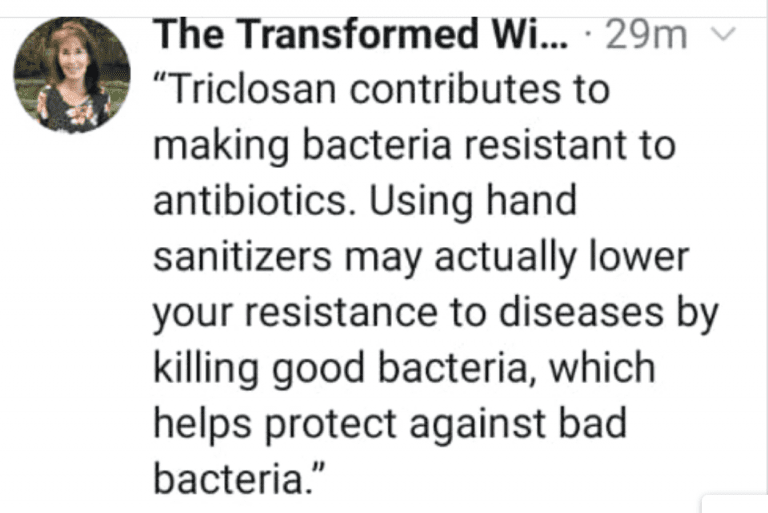 A good bacteria biome is not as important on your hands, a place that routinely is exposed to the most contamination than any other part of the body.  Plus the majority of people are going to run into that opposite problem, too much bacteria, good and bad, from, drumroll please, not bathing.

She posted another piece that is likely another huge falsehood. Lately she’s been obsessional about other women’s derrieres again, ranting again and again and again about thong bikini bottoms. One of her posts about them disappeared before I could get a screen shot. She was claiming to have been recently walking the beach with her husband, and encountering a wild pod of thonged buttocks. She claimed the girls were standing in a social distancing circle around the park ranger getting chewed out.

This particular story isn’t even possible. Beaches in her area have been closed for quite some time now. There were no recently viewed thonged rears, she made the story up to fit her narrative about thong hating. Her hatred seems like it is all jealousy, half jealousy she’s now too old to wear one, and jealous that her her husband might glimpse a wild stray buttock and pop a stiffy. Sad way to live.

Upon further research it looks like they may be living quite near a beach that is known as a topless and/or nude beach. I have to wonder if they were walking too near that particular stretch back when the beaches were still open. Why not simply avoid the family unfriendly parts of the coastline and save your own sanity?

One thing I am realizing anew yet again is what a constant font of negativity and putting others down this woman is. No love, no joy, just whining and complaining. She’s even gone so far as to turn off all comments, likes and dislikes from her frequent and frequently toxic YouTube videos. 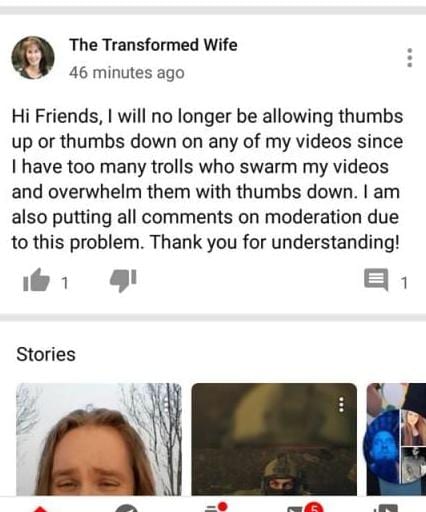 Do you see the most unintentionally funny thing ever here? Jimmy Snow of “Dear Mr. Atheist” creeping up in the lower left hand corner of her announcement? The same man she is rumored to have asked people in her chat room to go vote his videos about her with a thumbs down. Oh sweet hypocrite!

Last night Jimmy addressed one of her fan girls that posted a comment accusing him of violating this women’s First Amendment rights.

May 8, 2020 Jim Bakker Suffers Stroke
Recent Comments
0 | Leave a Comment
"This is late, partly bc of my preoccupation and partly bc I'd been slowly reading ..."
Jennifer Serena’s Serenity – Luxury Hotel, Birthing ..."
"Thank you for your commitment to truth and love, Suzanne. Best wishes to you and ..."
Meredith Anne Not a Goodbye, More of a ..."
"For what it's worth, I've learned a lot from you about a Very Creepy movement ..."
Gwen Pryce Not a Goodbye, More of a ..."
"Unfortunately, this kind of satire (if it even is satire) is what gives Christianity the ..."
Emily Is Biblical Gender Roles a Big ..."
Browse Our Archives
Related posts from No Longer Quivering