Have scientists proven the story of Noah’s Ark?

A most interesting article popped up in the news feed this morning. The headline asks whether some great cataclysm happened before Adam and Eve.

In one of the most provocative and misunderstood studies of the year, scientists in the U.S. and Switzerland have made an astonishing discovery: All humans alive today are the offspring of a common father and mother – an Adam and Eve – who walked the planet 100,000 to 200,000 years ago, which by evolutionary standards is like yesterday. Moreover, the same is true of nine out of every 10 animal species, meaning that nearly all of Earth’s creatures living today sprang into being recently from some seminal, Big Bang-like event.

Mark Stoeckle at Rockefeller University and David Thaler at the University of Basel reached this striking conclusion after analyzing the DNA “bar codes” of five million animals from 100,000 different species. The bar codes are snippets of DNA that reside outside the nuclei of living cells – so-called mitochondrial DNA, which mothers pass down from generation to generation.

With each reproduction, errors creep into the bar code, as they do when you repeatedly photocopy a document. By measuring the accumulated errors – the blurriness or “diversity” among the bar codes – scientists are able to infer the passage of time.

That’s how Stoeckle and Thaler concluded that ninety percent of all animal species alive today come from parents that all began giving birth at roughly the same time, less than a quarter-million years ago. “This conclusion is very surprising,” Thaler avers, “and I fought against it as hard as I could.”

What caused animal life on Earth to be almost completely renewed such a short time ago? For now, it remains a mystery.

Not long ago I was giving a talk about mythology and told the story of the Babylonian creation myth the Enuma Elish.  The short version is that the primordial entities Apsu and Tiamat mingled together and from them various other gods and goddesses emanated: Lahmu and Lahamu, Anshar and Kishar and so forth. Then there was a big fight and Marduk emerged as another stronger god…and so it goes on at some length.

These stories which seem so far fetched to us in a literally minded age are among the myths we make about our origins. I commented at the time that we have our own creation myths….stories about our origins that make sense to us even though they can’t be proven. Our creation myth is evolution.

Don’t get me wrong. I’m not making any kind of scientific point. If scientists believe they have evidence for evolution that’s great. That’s their job. I’m not a scientist so I won’t step on their toes.

However, when the theory of evolution stops being scientific and starts to become a belief system on which one’s entire world view is determined, then it has become more like an ideology or a religion. Again, that’s ok, but people should realize that is what is happening rather than pretending it isn’t.

So to get back to today’s article, it would seem that a relatively short time ago (around 150,000 years ago) there was some sort of cataclysmic event that stopped everything, and only one human family and one pair of each species survived.

The scientists who have discovered this uncomfortable truth admit to being stymied. It cuts right across all the theories of old earth evolution–in which the natural world we now have is the result of unimaginably long periods of time during which all the created order evolved from the primordial soup. Instead, it looks like there was a starting point.

Of course the fundamentalist young earth creationists would probably whoop with joy because they have been proven right. “God created everything after all, and the only thing we need to correct is the dating. It wasn’t 150,000 years ago. God began to create everything on October 23, 4004 BC” (the classic date ascribed to Archbishop Usher)

In these debates we are wandering in a kind of no man’s land. Choose your theory. Stick to it and bend all the evidence to make it fit. You get the idea.

However, attempting to be open minded to all the viewpoints, it seems to me that the new story does say something very interesting about the earth’s origins. If I understand the scientists correctly they are theorizing that there was some sort of catastrophic event that destroyed life on earth except for one pair of each species–which then began to re populate the earth.

Instead of this being proof of Creationism, it does seem to indicate evidence for Noah’s flood. What has always fascinated me about the flood story is that it occurs in so many different ancient cultures around the world.

The flood myth motif is found among many cultures as seen in the Mesopotamian flood stories, Deucalion and Pyrrha in Greek mythology, the Genesis flood narrative, Pralaya in Hinduism, the Gun-Yu in Chinese mythology, Bergelmir in Norse mythology, in the lore of the K’iche’ and Maya peoples in Mesoamerica, the Lac Courte Oreilles Ojibwa tribe of Native Americans in North America, the Muisca, and Cañari Confederation, in South America, and the Aboriginal tribes in southern Australia.

Was there a primal catastrophe that flooded the whole earth of which only one hero, his family and the animals the rescued survive?

The curious thing about the science is that the young earth creationists gather the same evidence as traditional geologists and biologists, but they use that evidence to prove the flood myth. I guess your conclusions all depend on your starting point.

Either way, what is most interesting is that established myths one way or the other are turned upside down by these DNA findings, and there’s a subversive streak in me that always delights in established theories being undermined.

What do I think? I believe the story of Noah’s Ark does indeed record the memory of a primeval flood of some kind, and that this is a very cool discovery.

Visit my main blog-website to listen to podcasts, browse my books and be in touch. Go to dwightlongenecker.com 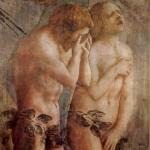 October 29, 2018
Tree of Life Synagogue and the Tree of Death
Next Post

December 19, 2018 The Power of Podcasting
Browse Our Archives
get the latest from
Catholic
Sign up for our newsletter
POPULAR AT PATHEOS Catholic
1