(Editors’ Note: This article is part of the Patheos Public Square on Heroes of 2014. Read other perspectives at the page beginning today.)

If you ask a well-established charity whether they’d rather have a large dramatic donation a few times a year or a steady income from small, dependable donors, they’ll tell you they want, need and appreciate “both”, but that if they had to choose, they’d take the everyday small donors, who manage to remain faithful in lush times and in lean; they are the ones who keep the good works going.

The same is true of “heroes”. Say the word, and we will immediately think of those outsized characters who are mostly fictional — Batman; Tony Stark; Zombie Killer Abe Lincoln — along with the few authentic giants of humanity who come around every generation. We all know about Mother Teresa and Martin Luther King. Our recently canonized or beatified popes — all heroes, in different ways. The Pope Emeritus and the present Holy Father are both heroes of humility in separate fashion.

But for all the good they do, I really think it’s the everyday heroics performed by those we rarely hear about — “everyday donors” to the daily drama of life — who step up and pitch in, and are mostly unnoticed — that speed God’s glory and keep the world balanced toward righteousness.

Where do we find them? All around us, local to us; sometimes they share the same breathing air with us, or the same ethernet. Maybe it’s Advent prompting me to ponder the smallness in which originates our greatness. When I look around, local to me, I see:

Dilshad D. Ali, and Shana Buck, and Elizabeth Husted Duffy, all writing with exquisite beauty, and more than a little naked pain, about the work of raising a child (or several) falling within the “Autism Spectrum”, and how it challenges everything. It challenges their love; it challenges their faith; it sows tares of doubt throughout the family and within themselves, doubt that must be continually weeded back with a firm outreach of love.

Heroic Moses endured a few conversations with God, and he could barely be looked upon. These parents, and the ones like them all over the world, do a face-to-face with God every single day. They have earned the awe and respect we reserve for heroes.

So do people like Russell Shaw and thousands of others, who live through the pain of watching their beloved spouse mentally slip away from them, through dementia, often with great loneliness and little support from those who really understand.

A neighbor of mine works as a therapist for Alzheimer’s patients, both high-functioning and low. She recently described one sixty-ish daily visitor. “He is a saint. Every day he brings his lunch and eats with his wife. She doesn’t recognize him, so every day she is meeting a new friend. When we told him he needn’t come so often he said, ‘But she is my bride; if I did not see her, I would miss her.’”

The man’s wife had changed, but if she was no longer capable of seeing her groom, he still beheld and adored his bride. Their marriage, then, is the microcosmic reflection of the macro-love of God for his people and the love of Christ for his church. Love without limit, love without fear, love without desertion; love in joy and in pain, love in the shallows and the depths, love without end.

It’s love that makes a hero, and God is love. God is everywhere and so are these heroes.

The dying nun who consoles those who visit

The parent giving a beloved daughter over to a dream he cannot quite comprehend.

The people who clean up after a riot, because they love their neighbors as themselves.

The people who volunteer on the strength of blind good faith and consent to be pulled out of comfort zones for the sake of the kingdom.

The gay Christian in love with Christ who dares to counter the culture.

The people who live through unspeakable horror and then teach the world about forgiveness.

The people who consecrate themselves to God and then venture into dens of inhumanity in order to be present and give witness, without condemnation.

The people who see their child recover from a cold only to lose the use of her legs, and choose not to live in bitterness because there are no answers.

The people who hear “Oh, Haiti, it’s hopeless why bother?” but commit themselves and their lives to the creation of hope, nevertheless.

The single parent willing to stare down a church overfocusing on the greasy wheels and saying, “Hey, what are we and our kids, chopped liver?”

The people who speak up and speak out, often at great risk; never with violence.

Without that love; without that pain, without that consent, all that is left is sterile and empty and dark. There is nothing, there. No heroes.

But “nothing” is impossible, with God [1:37]. And God is love. And within love, heroes abound. 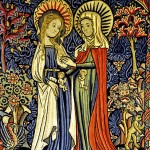 December 2, 2014
Missing the Advent Beauty that Used to be Catholicism - UPDATED
Next Post