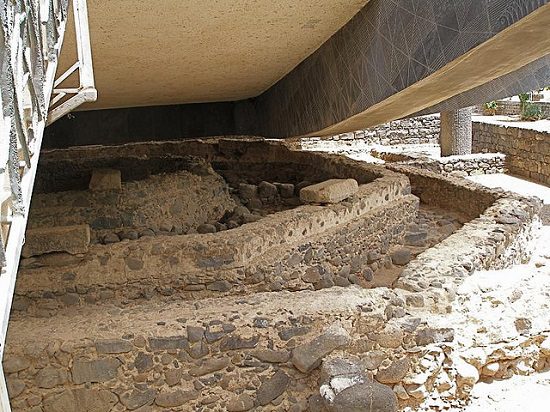 Octagonal remains of the Byzantine church built over St. Peter’s house at Capernaum (Seetheholyland.net) [Flickr / CC BY-SA 2.0 license]
*
(9-23-14)
*
[portion of a chapter in my book, Footsteps that Echo Forever: My Holy Land Pilgrimage]
***
It remains an indisputable fact of history, that Catholics from their earliest existence in the apostolic age, have commemorated important, holy sites in biblical and Catholic history: often by building churches or at least shrines of some sort where they happened. We know this is true, among many other reasons, because Catholics are frequently blasted for the supposed “idolatry” that (we are told) occurs I such places: whether it is a holy location or the relics of a saint.
*
Thus, archaeology (knowing this full well) often begins with the premise that the early Christians remembered where important events having to do with their religion took place. This was perhaps most notably true in the case of the Church of the Holy Sepulchre in Jerusalem, as we saw in another chapter. Archaeologists and historians largely agree that it encompasses the likely locations of Jesus’ crucifixion and His tomb.
*
The authenticity of this holiest of Christian churches is accepted because the earliest churches built on the spot were based on the collective memory of the local tradition of Christians. These things don’t proceed merely by happenstance or a good “guess.” They’re based on legitimate memories and traditions passed down.
*
Many analogies to every day life easily bring this point home. For example, a family might revere a house or some property where its ancestors had lived for hundreds of years. They generally don’t forget where it was unless many hundreds of years pass.
*
Americans know exactly where George Washington was born, or where Benjamin Franklin worked as an apprentice in a print shop in Philadelphia (I’ve been there). Those two things are at least 280 years ago. We know where the American nation began: Jamestown, Virginia in 1607 (I’ve been there, too). That’s more than 400 years ago, but has not been forgotten at all. Why would it be? It’s clear that very significant places will usually be remembered and documented.
*
It’s not difficult to remember particulars over many generations. This applies to Christians and their own history, just as it does to anyone else. One person, after all, can live for a period encompassing parts of three generations. My 89-year-old mother can remember things from the late 1920s, which is now over 85 years ago, or more than two biblical generations.
*
In other instances, it should also be noted, some things seem to be lost to history, as I have argued elsewhere in this book was the cases with the location of Jesus’ baptism and the Via Dolorosa. Yet the exceptions don’t disprove the rule (the latter was a late tradition to begin with, and so more speculation was in play). Because some things were forgotten or lost track of in the mists of history doesn’t mean that all things are.

In the case of what many believe to be St. Peter’s house in Capernaum, on the shores of the Sea of Galilee, the argument is very straightforward: an ancient church was built over what was formerly a house. The simplest explanation is that the house must have had some great significance in Christian history. St. Peter’s house fits that bill, and is the most reasonable explanation (though it remains unable to be proved – like nearly all things in archaeology – beyond any doubt whatsoever).

*
To acknowledge this doesn’t even require a personal Catholic belief. It’s just history, and how things were done by Christians, and even a secular archaeologist has no trouble accepting it.
*
The Bible History Daily website, from the Biblical Archaeology Society, provides a basic overview of the evidence involved here, in its article (3-29-11), “The House of Peter: The Home of Jesus in Capernaum?”:
*
It was here during the infancy of early Christianity that he began his ministry in the town synagogue (Mark 1:21), recruited his first disciples (Mark 1:16–20) and became renowned for his power to heal the sick and infirm (Mark 3:1–5).
*
. . . Where was the house of Peter, which the Bible suggests was the home of Jesus in Capernaum (Matthew 8:14–16)?
*
Italian excavators working in Capernaum may have actually uncovered the remnants of the humble house of Peter that Jesus called home while in Capernaum. . . .
*
Buried beneath the remains of an octagonal Byzantine martyrium church, excavators found the ruins of a rather mundane dwelling dating to the first century B.C.
*
Octagonal martyria were built to commemorate an important site, such as the original house of Peter that once stood here. The inner sanctum of the octagonal building was built directly above the remains of the very room of the first-century house that had formed the central hall of the earlier church.
*
. . . Were it not for its association with Jesus and Peter, why else would a run-of-the-mill first-century house in Capernaum have become a focal point of Christian worship and identity for centuries to come?
*
W. von Menden began the excavation of the remains of the octagonal church from 1906 to 1915. The Franciscan Gaudenzio Orfali continued this work from 1921 to 1925. Franciscan Fathers Virgilio Corbo and Stanislao Loffreda again excavated the area from 1968 to 1985.
*
This is the house where Jesus healed Peter’s mother-in-law (Mk 1:29-34), cured the paralytic lowered down from above (Mk 2:1-4), as well as many others near the door (Mk 1:33), and preached to the crowds (Mt 12:46-50). It has immense significance in Christian history. In the nearby synagogue He taught many times, including his magnificent eucharistic discourse recorded in John 6 (see Jn 6:59). Historical attestation of a church being built over Peter’s house also exists. The Spanish nun Egeria, wrote around 381 to 395:
*
And in Capernaum, what is more, the house of the prince of the apostles [Peter] has been transformed into a church, with its original walls still standing. Here the Lord healed the paralytic. There is also the synagogue where the Lord healed the man possessed by demons . . .
*
An unnamed pilgrim, writing around 560-570 noted the Byzantine basilica: “And so we came on to Capernaum to the house of Saint Peter, which is now a basilica.”
*
Raymond E. Marley, writing in the Jerusalem Christian Review in 1998 1, observed:
*
An open area between the street and the doorway, leading to the courtyard, makes the building unique among others found in the vicinity. This open area would have allowed space for a large number of people to “gather at the door” of Peter’s home to hear Jesus’ preaching. (Mark 1:33; 2:1-3)
*
. . . Inside the building, numerous coins, pottery and oil-lamps dating to the first century were discovered, along with artifacts which included several fish hooks.
*
Archaeologists also unearthed evidence of memorials built by later Christian generations around Peter’s home.
*
“Christians who lived in Capernaum during the second, third and fourth centuries highly venerated this site and showed great care not to destroy the house, but rather to add additional structures to it,” said Italian scholar, Virgilio Corbo, who excavated at the site.
*
Jesus regarded Capernaum as His home (Mt 9:1; Mk 2:1; 3:19; 10:10), and He likely lived in St. Peter’s house. He performed many miracles in the town (Mt 4:18-22; Mk 1:34), and there He chose his first four disciples (Peter, Andrew, James, and John); later also enlisting the tax-collector Matthew (Mt 9:9; Mk 2:14; Lk 5:27). This is also where He healed the centurion’s servant (Lk 7:1-10). His mother Mary visited (Mk 3:31). He explained His parables in greater depth to the disciples in Peter’s house (Mk 7:17). Here He embraced the little child and taught about humility and servanthood (Mk 9:33-37).
*
James H. Charlesworth, professor of New Testament Language and Literature at Princeton Theological Seminary, writing in the book he edited, Jesus and Archaeology 2, concluded about this matter:
*
Archaeological evidence is almost always hotly debated. What, then, is clear? The “house church” in Capernaum that is celebrated as Peter’s house may well be the house in which Jesus taught. It is certainly not a “synagogue,” but it seems to be Peter’s house. Thus, I fully agree with J. Murphy-O’Connor, who is unusually well informed of data related to Jesus and archaeology and astutely critical; notice his judgment: “The most reasonable assumption is the one attested by the Byzantine pilgrims, namely, that it was the house of Peter in which Jesus may have lodged (Mt 5:20). Certainly nothing in the excavations contradicts this identification. 3
*
John J. Rousseau reiterates my original point above:
*
Ancient peoples tended to build new sanctuaries over preexisting ones, even if they were dedicated to a different god. In this case, the Byzantine octagonal church was built exactly over the ancient large room. 4
*
And more specifically, on the same page:
*
Artifacts discovered there (Herodian coins and lamps, fish hooks) show that the house was occupied as early as the first century B.C.E. and that people involved in fishing lived in or around the house.
*
. . . The excavators’ conclusions are widely accepted today.
*
FOOTNOTES
*
1 “Is It the Home of Peter?: Miraculous Discoveries in the ‘City of Miracles’,” Vol. 9, Internet edition, Issue 1.
2 Grand Rapids, Michigan: Wm. B. Eerdmans Publishing Co., 2006, p. 50.
3 The Holy Land, 4th ed. (Oxford and New York: Oxford University Press, 1998), p. 220.
4 Jesus and His World: An Archaeological and Cultural Dictionary (Minneapolis: Augsburg Fortress Press, 1995); co-authored with Rami Arav, p. 40 (“Capernaum”).
* * * * *
Previous Post 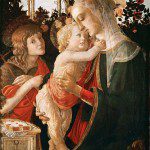 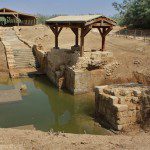