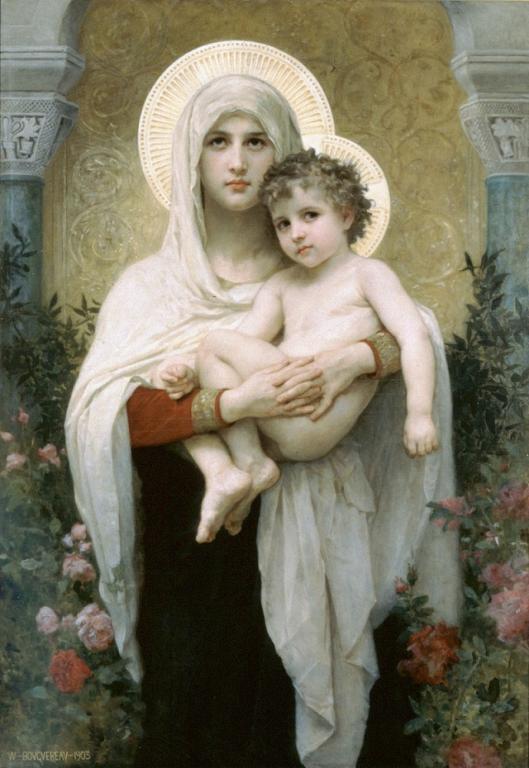 Here are the actual biblical passages where this notion was drawn from (taken from the first draft of my upcoming book, Bible Proofs for Catholic Truths):

Luke 1:35 (RSV) And the angel said to her, “The Holy Spirit will come upon you, and the power of the Most High will overshadow you; therefore the child to be born will be called holy, the Son of God.”

The Greek word for overshadow is episkiasei, which describes a bright, glorious cloud. It is used with reference to the cloud of transfiguration of Jesus (Mt 17:5; Mk 9:7; Lk 9:34) and also has a connection to the shekinah glory of God in the Old Testament (Ex 24:15-16; 40:34-38; 1 Ki 8:10). Mary is, therefore, in effect, the new temple and holy of holies, where God was present in a special fashion. In fact, Scripture draws many parallels between Mary, the “ark of the new covenant” and the ark of the (old) covenant:

The Greek Septuagint translation uses the same word, episkiasei, in this passage.

1 Kings 8:6-11 Then the priests brought the ark of the covenant of the LORD to its place, in the inner sanctuary of the house, in the most holy place, underneath the wings of the cherubim. For the cherubim spread out their wings over the place of the ark, so that the cherubim made a covering above the ark and its poles. And the poles were so long that the ends of the poles were seen from the holy place before the inner sanctuary; but they could not be seen from outside; and they are there to this day. There was nothing in the ark except the two tables of stone which Moses put there at Horeb, where the LORD made a covenant with the people of Israel, when they came out of the land of Egypt. And when the priests came out of the holy place, a cloud filled the house of the LORD, so that the priests could not stand to minister because of the cloud; for the glory of the LORD filled the house of the LORD.

2 Samuel 6:9 And David was afraid of the LORD that day; and he said, “How can the ark of the LORD come to me?”

Luke 1:43 And why is this granted me, that the mother of my Lord should come to me?

2 Samuel 6:15 So David and all the house of Israel brought up the ark of the LORD with shouting, and with the sound of the horn.

Luke 1:42 and she exclaimed with a loud cry, “Blessed are you among women, and blessed is the fruit of your womb!”

2 Samuel 6:14, 16 And David danced before the LORD with all his might; and David was girded with a linen ephod. . . . King David leaping and dancing before the LORD . . .

1 Chronicles 15:29 And as the ark of the covenant of the LORD came to the city of David, Michal the daughter of Saul looked out of the window, and saw King David dancing and making merry . . .

Luke 1:44 For behold, when the voice of your greeting came to my ears, the babe in my womb leaped for joy.

Luke 1:39, 56 In those days Mary arose and went with haste into the hill country, to a city of Judah, . . . And Mary remained with her about three months, and returned to her home.

Further reflection on “holy places” and “holy items” brings out the meaning of the striking parallel symbolism. The Temple and Tabernacle were holy, and this was especially the case with the holy of holies, where the ark was kept. God was said to dwell above the ark, between the two cherubim (Ex 25:22). The presence of God always imparted holiness (Duet 7:6; 26:19; Jer 2:3). The furnishings of the Tabernacle could not be touched by anyone, save a few priests, on pain of death (Num 1:51-53; 2:17; 4:15).

This was true of the holiest things, associated with God and worship of God. The high priest only entered the holy of holies once a year, on the Day of Atonement (Num 29:8). The Jews would tie a rope to his leg in case he perished from improper behavior (Lev 16:2, 13), so they could pull him out. This was true of the ark itself. Uzziah merely reached out to steady it when it was toppling over, and was struck dead (2 Samuel 6:2-7). Others died when they simply looked inside of it (1 Sam 6:19; cf. Ex 33:20).

This is how God regards people and even inanimate objects that are in close proximity to Him. Thus, Mary, as the ark of the new covenant, Theotokos (“bearer of God”): the one who had the sublime honor of carrying God incarnate in her womb, had to be exceptionally holy to do so.

Mary, the Ark of the New Covenant (Steve Ray: This Rock, October 2005) [all Internet Archive links] 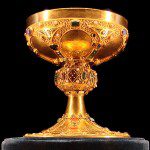 January 15, 2016
The Bible on Receiving One Species in Communion
Next Post 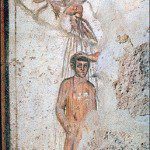 January 18, 2016 Baptizing the Dead? (Odd Verse 1 Corinthians 15:29)
Recent Comments
0 | Leave a Comment
"As for his number 2, I have never seen a person do it in the ..."
Tom Hanson Reply to Banzoli’s “Questions for Catholics ..."
"This post reminded me of a dialogic like t. Maximus' Disputation with Phyrrus. It is ..."
Paul Hoffer Reply to Banzoli’s “Questions for Catholics ..."
""After the United States was founded in 1776, abolition of slavery occurred in the Northern ..."
FarSeeker8 . “How Can God Order the Massacre ..."
"Wow! both of them had to either forget or never take normal logic."
Tom Hanson Communion of Saints, Scripture, & Anti-Catholic ..."
Browse Our Archives
Related posts from Biblical Evidence for Catholicism