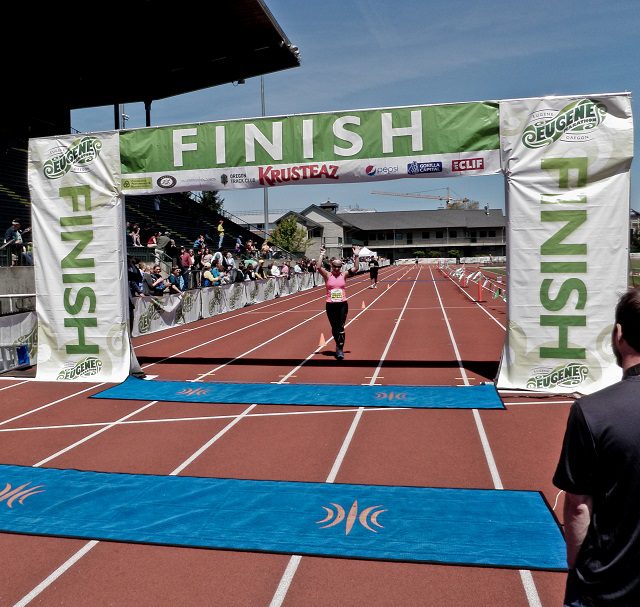 Finish line for a marathon race in Eugene, Oregon. Photo by Michael McCullough, 1 May 2011 [Flickr / CC BY 2.0 license]

This came about in a closed Facebook theological group, where I had posted my paper, The Bible on Participation in Our Own Salvation. One of the passages presented there (it’s simply a collection of Bible passages) is the following:

Philippians 2:12-13 (RSV) Therefore, my beloved, as you have always obeyed, so now, not only as in my presence but much more in my absence, work out your own salvation with fear and trembling; [13] for God is at work in you, both to will and to work for his good pleasure.

“Work out your own salvation with fear and trembling” is pretty straightforward stuff. Then Paul says God is at work in us, doing this. Exactly! God does it; we cooperate with Him, so there is a sense in which we participate through free will in our own salvation. It’s always by grace; yet it doesn’t exclude our free will work and appropriation of that grace.

An article was brought up by one of the members of the group in reply to this passage. It was written by one Bob Wilkin, a dispensationalist theologian (ThM and PhD from Dallas Theological Seminary) who is connected with the Grace Evangelical Society. He wrote in a 2010 article, “Work Out Your Salvation: Vindication at the Bema (Phil 2:12)”:

Why didn’t I see it before? “Your salvation” in 2:12 is so obviously compared to my salvation in 1:19! Paul anticipated his own vindication at the Bema. And he urges the readers to see to it that they too are vindicated at the Judgment Seat of Christ. They too faced persecution (see 1:27 -30). Would they continue to boldly magnify the name of Jesus? If not, they would face shame at the Bema. If so, they would hear Jesus’ praise there.I have heard many labored explanation of what it means to “work out” your own salvation. People struggle against works salvation. Well, this passage is preaching works “salvation.” But the salvation here is not eternal salvation from hell, but vindication at the Bema.

Bob Wilkin has a very different view from that of Ralph Earle, a Nazarene and Professor of New Testament and Biblical Literature. In his Word Meanings of the New Testament (one-volume, Grand Rapids, Michigan: Baker Book House, 1987, p. 338, on this passage), he writes:

The verb is katergazesthe. It means “work on to the finish,” or “carry out to the goal.” While Christ purchased our salvation and offers it to us as a free gift, yet there is a part that we must do if the salvation is to be completed in our case. . . . “Paul makes no attempt to reconcile divine sovereignty and human free agency, but boldly proclaims both” [citation of Baptist scholar A. T. Robertson].

This is precisely the Catholic position as well: synergy: co-workers or co-laborers with God. For v. 13 Dr. Earle comments, citing Marvin Vincent, who cited Augustine:

Philippians 2:12 (with 2:13) does not teach works salvation. It teaches that God gives the grace for salvation and that we then cooperate with that grace, by His grace, to apply it to our lives and eventual hoped-for eschatological salvation (entrance into heaven).

The concept of grace alone is taught in the Bible, just as the concept of the Trinity is, without that word. There is no participation in initially receiving the gift of salvation in Catholic teaching, over against Pelagianism and Semi-Pelagianism. Catholics agree with Protestants in believing in Grace Alone, as I have written about.

Faith alone, on the other hand, is directly and repeatedly denied in the Bible:

James 1:22 But be doers of the word, and not hearers only, deceiving yourselves.

James 2:14 What does it profit, my brethren, if a man says he has faith but has not works? Can his faith save him?

James 2:19-22 You believe that God is one; you do well. Even the demons believe — and shudder. [20] Do you want to be shown, you shallow man, that faith apart from works is barren? [21] Was not Abraham our father justified by works, when he offered his son Isaac upon the altar? [22] You see that faith was active along with his works, and faith was completed by works,

James 2:24 You see that a man is justified by works and NOT by faith ALONE.

James 2:26 For as the body apart from the spirit is dead, so faith apart from works is dead.

For more on the interpretation of James 2, see my refutation of Baptist anti-Catholic apologist James White’s treatment of it, in his book, The God Who Justifies.

It’s beyond odd (or bizarre) that if faith is everything in salvation and [grace-caused, grace-soaked, cooperative, responsive, co-laboring] works are nothing, that the Bible presents (in 50 passages that I have found) the exact opposite scenario (works being discussed to the almost total exclusion of faith) when it comes to passages about judgment and being admitted into heaven.

Works are part and parcel of faith, like the back side of a coin is part of the coin.

However anyone wants to spin their theology, it remains true that in these 50 passages about judgment and why folks should be allowed in or barred from heaven, works are front and center. That has to be squarely and honestly faced by anyone who truly respects the Bible as the inspired revelation that it is.

Knowing these facts, one cannot possibly maintain a faith-alone position with [grace-caused, grace-soaked, cooperative, responsive, co-laboring] works being excluded altogether from the equation of salvation. Yet the vast majority of Protestants do precisely that. They separate works in a little box called “sanctification” and believe that they have nothing whatsoever to do with salvation.

Both Luther and Calvin tied works very closely to salvation: if not in a totally “Catholic” fashion, at least very close in spirit to it in many ways. It was Melanchthon who really brought about the abstract separation into justification and sanctification, and never the twain shall meet. This move was unbiblical, and resulted because he and most Protestants since think in unbiblically dichotomous and “either/or” terms; whereas the Hebraic / biblical view is “both/and” — with striking (but non-contradictory and ultimately harmonious) paradoxes that are held together by biblical statements supporting both sides.

Again, the Bible views faith and works as  two sides of one coin, according to massive evidence, not just in James (which is most explicit) but also in many many Pauline and Gospel passages as well. See also, for example, the story of the rich young ruler, that I recently wrote about twice.

For St. Paul in particular, faith and works are organically connected, as we see in no less than 50 passages from his inspired writing. 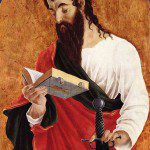 January 25, 2016
Bible on Participation in Our Own Salvation
Next Post 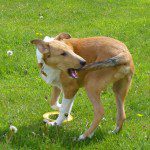 Catholic
Loving Ourselves (Since God Loves Us So Much!)
Biblical Evidence for Catholicism
TRENDING AT PATHEOS Catholic