Jesus the Jew / Jewish Law and the New Testament 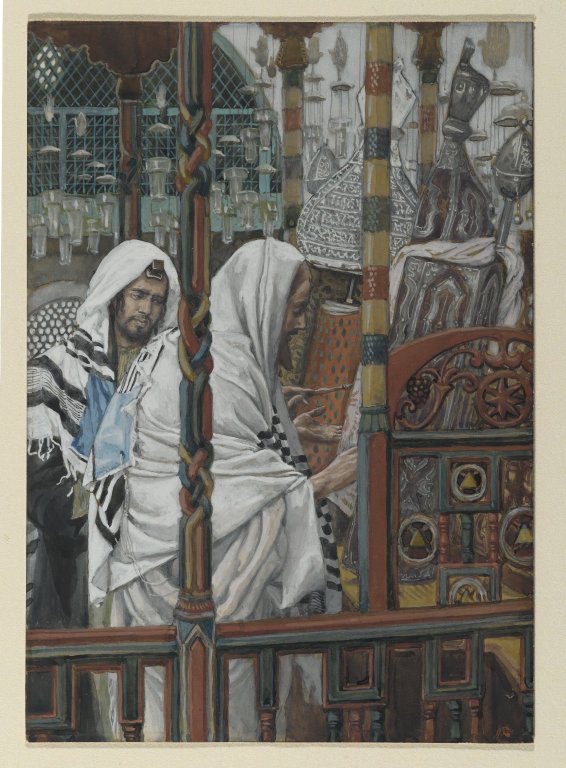 I was asked a question about how to reply to a husband who is involved in a form of messianic Judaism (i.e., Christianity) that observes all the Jewish laws and holy days, and believes in Saturday worship. He argued that Jesus kept all the Jewish laws, so why should His followers do any differently? He thinks that the Old Covenant Law remains in force, completely unchanged by the advent of Christianity. Here is my reply.

Jesus kept the laws, I imagine, because, as a Jew, He wanted to be like the people He was among. If He had not been an observant Jew, according to custom, He would have had far less influence than He did, because He would have been an outsider. Jesus was also baptized, when He didn’t have to be because He had no sin to repent of and was in no need of regeneration. But while Jesus observed the law, He also (rather radically and controversially) expanded and developed it, and expressed its deeper, fundamental meaning. For example, observe these passages (RSV):

[1] At that time Jesus went through the grainfields on the sabbath; his disciples were hungry, and they began to pluck heads of grain and to eat.
[2] But when the Pharisees saw it, they said to him, “Look, your disciples are doing what is not lawful to do on the sabbath.”
[3] He said to them, “Have you not read what David did, when he was hungry, and those who were with him:
[4] how he entered the house of God and ate the bread of the Presence, which it was not lawful for him to eat nor for those who were with him, but only for the priests?
[5] Or have you not read in the law how on the sabbath the priests in the temple profane the sabbath, and are guiltless?
[6] I tell you, something greater than the temple is here.
[7] And if you had known what this means, `I desire mercy, and not sacrifice,’ you would not have condemned the guiltless.
[8] For the Son of man is lord of the sabbath.”
[9] And he went on from there, and entered their synagogue.
[10] And behold, there was a man with a withered hand. And they asked him, “Is it lawful to heal on the sabbath?” so that they might accuse him.
[11] He said to them, “What man of you, if he has one sheep and it falls into a pit on the sabbath, will not lay hold of it and lift it out?
[12] Of how much more value is a man than a sheep! So it is lawful to do good on the sabbath.”
[13] Then he said to the man, “Stretch out your hand.” And the man stretched it out, and it was restored, whole like the other.
[14] But the Pharisees went out and took counsel against him, how to destroy him.

[18] Now John’s disciples and the Pharisees were fasting; and people came and said to him, “Why do John’s disciples and the disciples of the Pharisees fast, but your disciples do not fast?”
[19] And Jesus said to them, “Can the wedding guests fast while the bridegroom is with them? As long as they have the bridegroom with them, they cannot fast.
[20] The days will come, when the bridegroom is taken away from them, and then they will fast in that day.
[21] No one sews a piece of unshrunk cloth on an old garment; if he does, the patch tears away from it, the new from the old, and a worse tear is made.
[22] And no one puts new wine into old wineskins; if he does, the wine will burst the skins, and the wine is lost, and so are the skins; but new wine is for fresh skins.”
[23] One sabbath he was going through the grainfields; and as they made their way his disciples began to pluck heads of grain.
[24] And the Pharisees said to him, “Look, why are they doing what is not lawful on the sabbath?”
[25] And he said to them, “Have you never read what David did, when he was in need and was hungry, he and those who were with him:
[26] how he entered the house of God, when Abi’athar was high priest, and ate the bread of the Presence, which it is not lawful for any but the priests to eat, and also gave it to those who were with him?”
[27] And he said to them, “The sabbath was made for man, not man for the sabbath;
[28] so the Son of man is lord even of the sabbath.”

[1] On a sabbath, while he was going through the grainfields, his disciples plucked and ate some heads of grain, rubbing them in their hands.
[2] But some of the Pharisees said, “Why are you doing what is not lawful to do on the sabbath?” [3] And Jesus answered, “Have you not read what David did when he was hungry, he and those who were with him:
[4] how he entered the house of God, and took and ate the bread of the Presence, which it is not lawful for any but the priests to eat, and also gave it to those with him?”
[5] And he said to them, “The Son of man is lord of the sabbath.”
[6] On another sabbath, when he entered the synagogue and taught, a man was there whose right hand was withered.
[7] And the scribes and the Pharisees watched him, to see whether he would heal on the sabbath, so that they might find an accusation against him.
[8] But he knew their thoughts, and he said to the man who had the withered hand, “Come and stand here.” And he rose and stood there.
[9] And Jesus said to them, “I ask you, is it lawful on the sabbath to do good or to do harm, to save life or to destroy it?”
[10] And he looked around on them all, and said to him, “Stretch out your hand.” And he did so, and his hand was restored.
[11] But they were filled with fury and discussed with one another what they might do to Jesus.

[10] Now he was teaching in one of the synagogues on the sabbath.
[11] And there was a woman who had had a spirit of infirmity for eighteen years; she was bent over and could not fully straighten herself.
[12] And when Jesus saw her, he called her and said to her, “Woman, you are freed from your infirmity.”
[13] And he laid his hands upon her, and immediately she was made straight, and she praised God.
[14] But the ruler of the synagogue, indignant because Jesus had healed on the sabbath, said to the people, “There are six days on which work ought to be done; come on those days and be healed, and not on the sabbath day.”
[15] Then the Lord answered him, “You hypocrites! Does not each of you on the sabbath untie his ox or his ass from the manger, and lead it away to water it?
[16] And ought not this woman, a daughter of Abraham whom Satan bound for eighteen years, be loosed from this bond on the sabbath day?”
[17] As he said this, all his adversaries were put to shame; and all the people rejoiced at all the glorious things that were done by him.

Also, the strictly observant messianic Jew has to deal with the radical development of the Law that Paul made, Peter receiving a revelation that all foods are clean, and a solemn church council in Jerusalem confirming this (and also determining that Gentiles need not be circumcised: Acts 15:1-29; 16:4):

[9] The next day, as they were on their journey and coming near the city, Peter went up on the housetop to pray, about the sixth hour.
[10] And he became hungry and desired something to eat; but while they were preparing it, he fell into a trance
[11] and saw the heaven opened, and something descending, like a great sheet, let down by four corners upon the earth.
[12] In it were all kinds of animals and reptiles and birds of the air.
[13] And there came a voice to him, “Rise, Peter; kill and eat.”
[14] But Peter said, “No, Lord; for I have never eaten anything that is common or unclean.”
[15] And the voice came to him again a second time, “What God has cleansed, you must not call common.”
[16] This happened three times, and the thing was taken up at once to heaven.

The Bible also reveals that the earliest Christians started worshiping on Sunday, because of the Resurrection, not on Saturday (Acts 20:7; cf. Lk 24:1, Jn 20:1). So the task is to either accept all of the New Testament, or to take a position that the books other than the Gospels are not binding on Christians, which would be quite bizarre and unacceptable. It is a big biblical problem. It’s okay if someone wants to observe Jewish law on their own, but to make it a requirement of all Christians (i.e., just as it is observed by Orthodox Jews today, or by Jews just after Judaism and Christianity institutionally split) is unacceptable, because it is unbiblical, according to clear New Testament teaching and the example of the earliest Christians.

Judaism and Christianity: Profound Closeness in the New Testament [1-2-09]

Passover in Judaism & the Supra-Temporal Mass: “Past Events Become Present Today”/ Survey of “Remember” in Scripture [7-7-09]

Meta Description: Does the Old Covenant Law remain completely undeveloped by the advent of Christianity, since Jesus observed the Law? No. 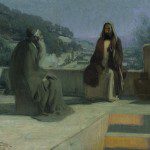 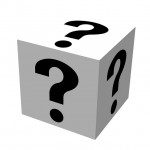 December 1, 2016 Pope Francis: Please Answer Cardinal Burke Et Al
Recent Comments
0 | Leave a Comment
"Amen!"
Dave Armstrong Catholic Development of Doctrine: A Defense: ..."
"Mr. Engwer's arguments reek of desperation- he is clearly going out of his way not ..."
Porphyry Catholic Development of Doctrine: A Defense: ..."
"I don't feel like this is at all responsive. Anyway, cheers."
theprodigal Invocation of Saints and Angels (vs. ..."
"I'm not defensive at all. I tried my best to answer, but as so often ..."
Dave Armstrong Invocation of Saints and Angels (vs. ..."
Browse Our Archives
Follow Us! 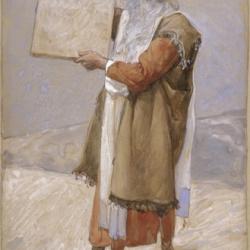 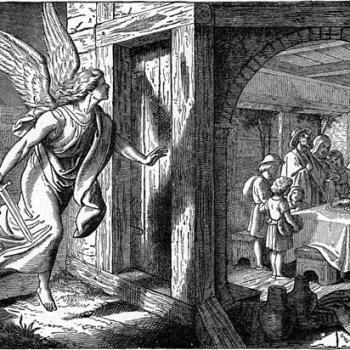