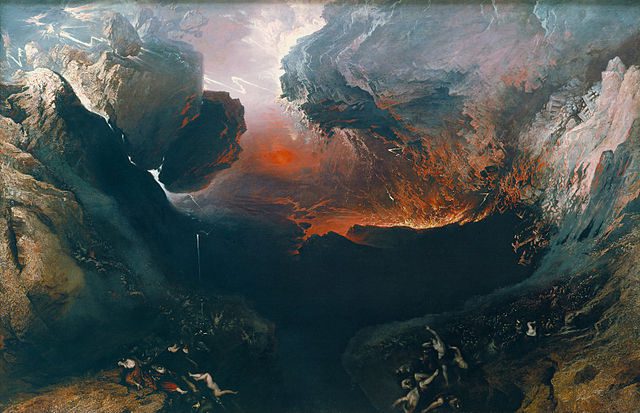 Hats off to blog regular Maroun for citing a great argument of this sort in an open forum combox, from St. John Chrysostom, who wrote:

Of what honor, of what blessedness are these words? And He said not, Take, but, “Inherit,” as one’s own, as your Father’s, as yours, as due to you from the first. For, before you were, saith He, these things had been prepared, and made ready for you, forasmuch as I knew you would be such as you are.

And in return for what do they receive such things? For the covering of a roof, for a garment, for bread, for cold water, for visiting, for going into the prison. For indeed in every case it is for what is needed; and sometimes not even for that. For surely, as I have said, the sick and he that is in bonds seeks not for this only, but the one to be loosed, the other to be delivered from his infirmity. But He, being gracious, requires only what is within our power, or rather even less than what is within our power, leaving to us to exert our generosity in doing more.

But to the others He saith, “Depart from me, ye cursed,” (no longer of the Father; for not He laid the curse upon them, but their own works), “into the everlasting fire, prepared,” not for you, but “for the devil and his angels.” For concerning the kingdom indeed, when He had said, “Come, inherit the kingdom,” He added, “prepared for you before the foundation of the world;” but concerning the fire, no longer so, but, “prepared for the devil.” I, saith He, prepared the kingdom for you, but the fire no more for you, but “for the devil and his angels;” but since ye cast yourselves therein, impute it to yourselves. And not in this way only, but by what follows also, like as though He were excusing Himself to them, He sets forth the causes.

This put in my head the idea of doing a Scripture study of “prepare” and “called” and “predestined” and other similar terms, in relation to heaven, to see if these are ever used in a parallel fashion of hell as well, so that there is an equivalence: “prepared (etc.) for heaven” / “prepared for hell.” Matthew 25 shows that this is not the case. What do other related passages teach us about this?

Matthew 20:23 He said to them, “You will drink my cup, but to sit at my right hand and at my left is not mine to grant, but it is for those for whom it has been prepared by my Father.”

Mark 10:40 but to sit at my right hand or at my left is not mine to grant, but it is for those for whom it has been prepared.

John 10:27-28 My sheep hear my voice, and I know them, and they follow me; [28] and I give them eternal life, and they shall never perish, and no one shall snatch them out of my hand.

Acts 13:46, 48 And Paul and Barnabas spoke out boldly, saying, “It was necessary that the word of God should be spoken first to you. Since you thrust it from you, and judge yourselves unworthy of eternal life, behold, we turn to the Gentiles. . . . [48] And when the Gentiles heard this, they were glad and glorified the word of God; and as many as were ordained to eternal life believed.

This contradicts Calvinism all over the place (a very fitting thing for the first Catholic pope to do!). If these are people who never were saved (as a Calvinist would say), then how can it be stated that Jesus “bought them”? That would refute Limited Atonement, since Jesus only “buys” those who are indeed saved and of the elect, and Perseverance as well, since they were bought by Jesus but yet later denied Him. Secondly, they are here sentencing themselves and in effect casting themselves into hell (with free will and post-Fall rebellion against God), rather than God decreeing and ordaining and predestining and deciding that from all eternity.

They were once “in” the “right way,” otherwise they could not be described as “forsaking” it. Nor can one go “astray” from a state one was never in. Peter states in 2:17 that “for them the nether gloom of darkness has been reserved,” but this is not the same as saying it was predestined for eternity that they should go there. This is one of many many cases where the Bible teaches one thing, Calvinism another. Later in the chapter, Peter makes a very strong denial of Perseverance of the Saints and Irresistible Grace:

2 Peter 2:20-22 For if, after they have escaped the defilements of the world through the knowledge of our Lord and Savior Jesus Christ, they are again entangled in them and overpowered, the last state has become worse for them than the first. [21] For it would have been better for them never to have known the way of righteousness than after knowing it to turn back from the holy commandment delivered to them. [22] It has happened to them according to the true proverb, The dog turns back to his own vomit, and the sow is washed only to wallow in the mire.
*

These people escaped “the defilements,” meaning they were in good graces with God by means of Jesus’ work. They went from a “bad” state to a “good” one. They left their “vomit” but then later returned to it. When Peter says “they are again entangled in them and overpowered,” it is yet more proof that they were in the pool of the saved and the justified, but went back to their old ways. If indeed this was not possible: that no one can ever go from one state to the other, then the very words “again” and “escaped” and “turned back” comparisons of one state over against another (with these folks having been in both camps) would be perfectly senseless; literally nonsense. But we can’t accuse inspired Scripture of that, so it must be Calvinism that is the nonsense.

While we’re on the theme of additional disproofs of Calvinism, here is another refutation of Limited Atonement:

Acts 3:26 God, having raised up his servant, sent him to you first, to bless you in turning every one of you from your wickedness.
*
God doesn’t select just a few for His elect and let the others go to hell by His non-action. He desires to save “every one”.
*
Revelation 13:8 and all who dwell on earth will worship it, every one whose name has not been written before the foundation of the world in the book of life of the Lamb that was slain.

There are only a few passages I could find in my fairly comprehensive scriptural survey that imply that God predestines the damned to their fate:

Romans 11:7-10 What then? Israel failed to obtain what it sought. The elect obtained it, but the rest were hardened, [8] as it is written, “God gave them a spirit of stupor, eyes that should not see and ears that should not hear, down to this very day.” [9] And David says, “Let their table become a snare and a trap, a pitfall and a retribution for them; [10] let their eyes be darkened so that they cannot see, and bend their backs for ever.”
*

This language of “hardening,” I have explained adequately, I think, in several past papers, showing that it is pungent Hebraic idiomatic language for God’s Providence. He utilizes men’s sin for His purposes and plan, but it doesn’t follow that He Himself hardens anyone apart from their own previous free will decision (or that He ever is the author of sin and evil).

Even beyond the argument from use of biblical language and anthropomorphic language with reference to God, this cannot logically apply to predestination from eternity anyway, unless it is applied to a supralapsarian scenario, whereby God predestined even the fall of man (rather than it being a free choice). Supralapsarianism is rejected by the majority of Calvinists throughout history. Many Calvinists claim that even John Calvin rejected it (my position is that he was indeed a supralapsarian).

If it is an eternal decree of hardening, it had to apply to the state of man before the fall, because at that time he was good, since God created him good. But this would entail a good God after a good creation deliberately decreeing that certain of his good created men would be damned. They were created to be damned. This would clearly make God the author of evil and cast serious doubts on His character as a loving, merciful God and His justice. That is supralapsarian, and we can readily see why even most Calvinists, historically, and presently, reject it.

The same Scripture cannot apply to infralapsarianism because after the fall, the whole of humanity was in sin and fallen; therefore, men (all men) already were hardened and He couldn’t have chosen from the whole group to harden some. If they already were in such a state, then God couldn’t have decreed that some should attain to that, unless He had in fact decreed it before the fall ever took place, or (more accurately, if we want to get technical) as applied logically to pre-fallen man.

Romans 11:28-32 As regards the gospel they are enemies of God, for your sake; but as regards election they are beloved for the sake of their forefathers. [29] For the gifts and the call of God are irrevocable. [30] Just as you were once disobedient to God but now have received mercy because of their disobedience, [31] so they have now been disobedient in order that by the mercy shown to you they also may receive mercy. [32] For God has consigned all men to disobedience, that he may have mercy upon all. (cf. 1 Peter 2:8)
*
This looks like a very difficult passage for a Calvinist to explain according to his system. The Jews are described as “enemies of God” insofar as they largely rejected the gospel. Yet they are also described as of the elect, since “the call of God” is “irrevocable.” If this call of God can never be affected by free will, then it looks like Paul is here teaching that all Jews will be saved, since they are elect and chosen. But we know that to not be the case. Therefore, Paul’s type of language and idiom must somehow explain his thought otherwise. To top it off, he says that “God has consigned all men to disobedience” (that is, they all fell). That doesn’t work with Calvinism, either, because according to them, He only consigned some to that. Nor does having “mercy upon all” fit into the Limited Atonement schema. For the Calvinist, God doesn’t even desire of decree mercy for all; He does so only for some: the elect. 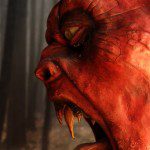 January 25, 2017
The Stupidity and Idiocy of the Devil (Dialogue)
Next Post 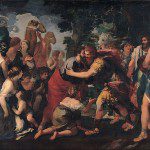 January 26, 2017 Romans 9: Plausible Non-Calvinist Interpretation
Recent Comments
0 | Leave a Comment
Browse Our Archives
get the latest from
Biblical Evidence for Catholicism
Sign up for our newsletter
POPULAR AT PATHEOS Catholic
1