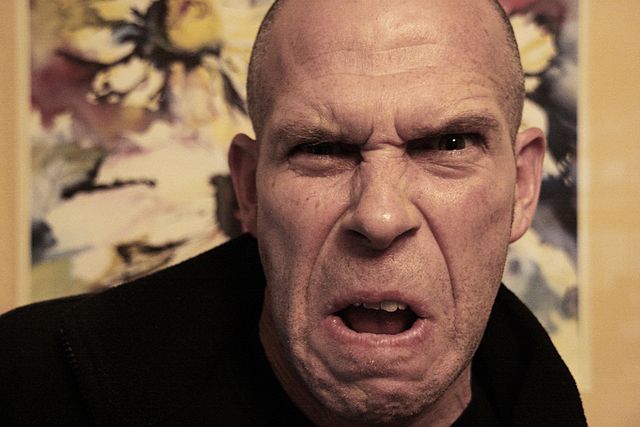 I ran across a typical [former Catholic] “angry atheist” sub-type on my blog (note that I’m not saying that all atheists are angry and anti-theist, but there is a large group that is). I immediately banned him when I saw his comment (which — needless to say — made not the slightest attempt to interact with my article) because it broke my discussion rules and the standard I set on my sites: it was uncivil, uncharitable, insulting, bigoted, and plain stupid, along with lacking any substance that we could actually constructively discuss. Here it is, from “Simon”: on 3-7-17, complete with his photograph:

No human with a sound-reasoning brain will ever be able to justify the existence of an all-loving benevolent creator. You seriously have to be bat-sh*t crazy and delusional. Acceptance of reality is quite a liberating experience, I assure you… because when you finally DO accept reality, photos like this suddenly make perfect sense. 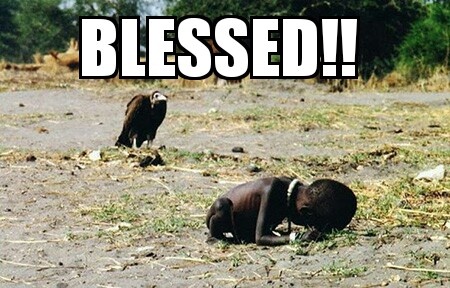 Nice try. This is so ridiculous, it’s difficult to believe that you actually sincerely think something so ludicrous. I won’t reciprocate the insult of delusional and being outside of reality (stock anti-theist boilerplate), but it is certainly beyond absurd and a substitute for solid reasoning minus the potshots and slanders.

The irony is that on this site, you did encounter a Christian who is more than able to interact with atheists and to provide for you the reasons you falsely think I can’t give, or that anyone can give. You’ve stumbled upon a professional Catholic apologist, who has written 49 books and over 2000 online articles, including hundreds about atheism or subjects connected with that in some way.

But because of your condescending demeanor I don’t have the slightest interest in continuing with you. My papers remain available for you to read if you lower yourself to reading Christian materials explaining why we Christians believe what we do. I suffer fools very badly, I’m afraid.

And of course you have to be banned, for massive violation of my policy for civil discussion and mutual respect on a personal level. But your comment will remain up as an absolutely classic display of the stereotypical and very common “angry atheist.”

Thanks for stopping by, and may the random collisions of atoms bless you henceforth.

Simon then replied on his site, citing my words in rebuke when I banned him. He is sure that he has proven that I’m the typical hypocritical Christian, as he sees it. Well, you be the judge of that. There is a time for a rebuke. It’s a perfectly biblical thing, but I wouldn’t expect this person to know that in the first place.

Anyway, he put up his reply, entitled, “Dave Armstrong, Catholic Apologist is Delusional” (3-16-17). You get the picture already from the title. But it’s even more sad and informative to read his entire piece. I cite all of it below, minus his citation of me (my words above). Then I reply at the end (which was posted on his page). I spare my readers the photos and videos that he also included.

I’ll admit that I didn’t exactly kick things off in a civil manner, but let’s face it – sometimes you need a little shock value to get your point across.  Civil discussion gets you nowhere when it comes to making a point about how absolutely ridiculous religious belief really is…  and I also wanted to push some buttons to see how those almighty religious folk would react.  (Spoiler alert – they didn’t act very Christ-like)

So, now that I’ve admitted to being a smartass…

What happens when you tell a “believer” that he is bat shit crazy for believing that there is a flying spaghetti monster in the sky arbitrarily blessing some while leaving others to be fed upon by vultures?

*
He doesn’t behave in any way like a Christian (What would Jesus do???).  He doesn’t offer any prayers for your soul.  He doesn’t have patience, temperance, or compassion for your seemingly confused, misguided ways.  What Dave Armstrong does is the same thing most chimpanzees do when you roll up onto their turf and start throwing rocks:  he throws rocks right on back.  I’m not surprised. This is typical primate behavior.  Here I was thinking these religious folks were supposed to behave in a Christ-like way.  Nope.

He, like every other sufferer of cognitive dissonance, resorts to name calling and behavior that would otherwise get his ass knocked out if tried to pull it off face to face in public (I triple dog dare ya, Davey).  He arrogantly points out how he’s the PROFESSIONAL Catholic apologist who has written 49 books and over 2000 online articles – like that’s supposed to mean something to me???
*
By the way folks – Dave’s blog – the one from which I have been delightfully banned (like I give a shit) has apparently won AWARDS!!!  You hear that?  AWARDS!!
*
All hail Catholic apologist, Dave.
*
I’m laughing Dave.  At you.
*
I can just imagine what it would be like if Jesus had a blog and acted like you:
*
“The irony is that on this site you encountered THE SON OF GOD — you hear me??  THE SON OF GOD.  I am Jesus Christ!  This is the Son of God’s blog!  No angry, absurd atheists allowed!  There is an entire testament in the Bible written all about ME!!!  You know – the Bible?? That book that is the inerrant word of my dad???  How dare you, you typical, angry atheist!!! You violated my policy of not being nice and not believing in me, so I’m banning you from my blog (and Heaven) FOREVER!!!!”
*
Oh man, Dave.  I was right – you ARE bat shit crazy.
*
You think I’m an angry atheist, but I’m actually a very, very well educated gentleman who was raised Roman Catholic and at one time considered the priesthood myself.  I’m at peace – finally – for the first time in my life.  I used to attend mass every day before school – Catholic school – attended from grade school all the way through high school.  I’ve studied every world religion, culture, and philosophy.  It took me 35 years of life and a dedicated pursuit of knowledge and scientific/historic inquiry to finally resolve the massive conflict in my big beautiful brain – a conflict caused by a belief system that made absolutely no sense whatsoever.
*
The fact that I am:
Well, I think that makes me the poster child for human evolution and advancement.
That is all.

Nice try. You’re clearly very impressed with yourself. For the life of me, I can’t figure out why. But I’m sure you act very differently with your atheist friends than with us troglodyte Christians, so I don’t get the full picture. Maybe one day you can get past your prejudice and I can interact normally with that person.

I wish all the best to you, and all of God’s blessings. That’s what Christians say. I only put “atoms” last time at the end, out of a humorous impulse: knowing you didn’t believe in God and would likely mock that, since you think I’m “crazy” and “delusional” etc. This time I say it “straight”: knowing that you will likely mock whatever I say.

I’ll share this response of yours on my blog as another classic of the angry anti-theist schtick. Pathetic . . . Thanks for that (i.e., for the educational value). You’re pretty lousy PR for your position, but it’s your life . . .

If this is the sort of image atheists (of your sort) wish to project, I’m very confident that atheism will continue to be a backwater, out-of-the-mainstream, cultural phenomenon, as it has always been, unless forced on the unwilling public (Stalinist Russia, Mao’s China, etc.). For who could possibly find such a presentation appealing? Even you freely admit that you “didn’t exactly kick things off in a civil manner.” BINGO!

The Atheist Obsession with Insulting Christians [9-15-15]
*
New Atheist Low: Mythical “Jesus” Like Charles Manson? [11-10-15]
*
Atheist Insulter Extraordinaire: Pete Migdale: Lies About What I Do from an Acid-Mouthed Type of Atheist [11-19-15]
*
Dialogue with an Atheist as to Whether or Not Mormons are Christians + Textbook “Angry Atheist” Parting Shots [Facebook, 1-15-17]
*
How Many Atheists and Agnostics Are Angry, Irrational, Anti-Theist, or Anti-Christian (Online and in “Real Life”)? [Facebook, 3-2-17]

*
Are Atheists “Evil”? Multiple Causes of Atheist Disbelief and the Possibility of Salvation [2-17-03] 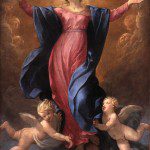 March 23, 2017
Mary Mediatrix and the Church Fathers (vs. James White)
Next Post 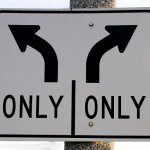