Dialogue on Samuel Appearing to Saul (Witch of Endor) 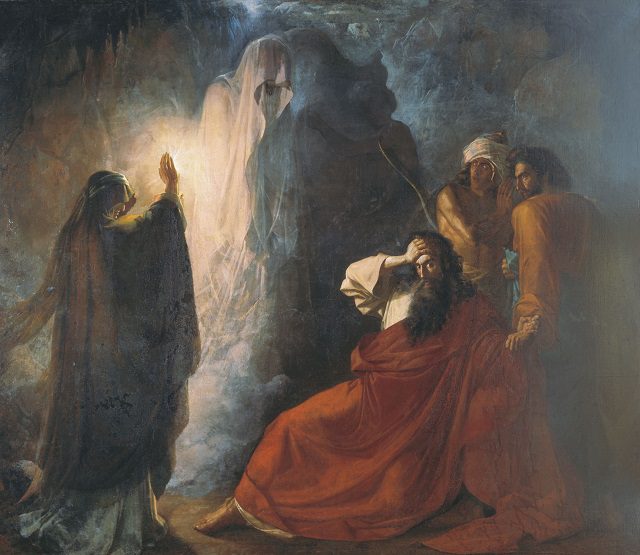 This is an exchange on my paper, Dialogue: Rich Man’s Prayer to Abraham (Lk 16) & Invocation of Saints. John E. Taylor is a Presbyterian friend of mine (OPC), whom I know “in real life.” His words will be in blue.

Much can be said but I’ll be brief.

1) The rich man could see Abraham, and vice versa. We have no indication saints can see us, since we can’t see them.

Hebrews 12:1 makes it quite clear that they can see us, and indeed are actively watching and interested.

2) Nor is there anything that tells us whether Abraham could send Lazarus back to earth. I’m not going to put any credence in one of the damned’s ability to know what a departed saint can do for us.

It’s not what the rich man thought, but what Jesus taught. He’s the one who told the story, with not the slightest hint that he shouldn’t have prayed to Abraham.

The text treats Samuel as the real person. Samuel gives a true prophecy.

4) Moses and Elijah conversing with Jesus at the Transformation is no indication we should seek the same – we’re not Christ.

It’s irrelevant if we are Christ or not. What that shows is that the departed can come back to earth, which we also know from Matthew 27 and the Two Witnesses of Revelation (not to mention the dead who were raised).

But the only ones I know who asked for favors from the dead were Saul (for which God killed him within a day or 3) and the rich man in hell.

Saul wasn’t killed because of the seance, but because of his prior sins:

1 Samuel 28:16-19 And Samuel said, “Why then do you ask me, since the LORD has turned from you and become your enemy? [17] The LORD has done to you as he spoke by me; for the LORD has torn the kingdom out of your hand, and given it to your neighbor, David. [18] Because you did not obey the voice of the LORD, and did not carry out his fierce wrath against Am’alek, therefore the LORD has done this thing to you this day. [19] Moreover the LORD will give Israel also with you into the hand of the Philistines; and tomorrow you and your sons shall be with me; the LORD will give the army of Israel also into the hand of the Philistines.

As I argued in the piece, it’s irrelevant to the proof who did the prayer. All that matters is how the prayer to Abraham is presented in the story by Jesus. And it’s presented as perfectly legitimate.

1 Chronicles 10:13 (ESV) So Saul died for his breach of faith. He broke faith with the Lord in that he did not keep the command of the Lord , and also consulted a medium, seeking guidance.

You sure you want to challenge me in Bible Trivia? :-)

:-) Fair enough. Chronicles provides that further information. So we must grant that consulting a medium was part of his sin, for which he was judged (what specifically he was judged for — dying in battle — was the only issue). I had either forgotten that tidbit or wasn’t ever aware of it. Score one for you!

How I use the example of Samuel from that passage, however, is a separate issue, which remains unrefuted. My point in bringing that up, is that God allowed a dead saint to appear to the living. Whether Saul used a medium and sinned in that way is beside the point of the real Samuel appearing and giving a true prophecy. All agree that seances and other practices of the occult and sorcery, necromancy, etc., are forbidden.

But the communion of saints is none of those things, as I have explained.

The Samuel-Saul encounter was nevertheless a real one. It wasn’t a demon impersonating Samuel, because demons don’t utter true prophecies of judgment.

That shows that contact with the dead in some fashion is indeed possible and in God’s will (or else Samuel simply wouldn’t have appeared at all).

Part of the presuppositions of Protestants, which are hostile to the communion of saints is this notion that there is never any communication (or even knowledge) at all (of any sort) between the departed and us living on earth. This is one passage among many that contradict that. Thus, it illustrates a necessary premise that lies behind the communion of saints.

Steve Wall added some excellent and illuminating remarks after I posted this in a Facebook group:

But, like you, I find it is usually impossible to get a Protestant to listen to any of it. They want to ignore everything beyond the witch and the conjuring.

The witch certainly did not have the power to bring Samuel into existence if he was not already in existence.

The witch certainly did not have the power to make Samuel aware of everything that had been and was happening to Saul.

The witch certainly did not have the power to make Samuel aware of what was about to befall Saul and his sons.

This is proof that the communion of saints is possible and that proof, more than the evil of the witch, is the real problem that Protestants have with this event.

As a lifelong Presbyterian, I’m surprised to be told we don’t believe there is any communion with the departed. We know Saul and the medium, the Transfiguration, etc. Conservative Presbyterians aren’t known for teaching doctrines that are flatly contradicted by Scripture.

Having said that, I find no support for Catholic doctrine in the witch story. Saul committed a capital crime:

“If a person turns to mediums and necromancers, whoring after them, I will set my face against that person and will cut him off from among his people. (Leviticus 20:6)

And God DID “cut him off” within days, if not that next day.

Nor does the Transfiguration justify our taking the initiative and seeking communion with departed saints. Jesus said:

So Jesus said to them, “Truly, truly, I say to you, the Son can do nothing of his own accord, but only what he sees the Father doing. For whatever the Father does, that the Son does likewise. For the Father loves the Son and shows him all that he himself is doing. And greater works than these will he show him, so that you may marvel. (John 5:19‭-‬20 ESV)

It follows then that meeting with Moses and Elijah was not Christ’s idea but the Father’s. There may be support for invoking the dead, but it’s not here.

Finally, Isaiah’s rhetorical question should be heeded: “Should they inquire of the dead on behalf of the living?” (Isaiah 8:19)

But again you ignored Steve’s point, thus making a prophet of him, when he wrote: “They want to ignore everything beyond the witch and the conjuring.” That’s all you can see. You don’t want to analyze the other aspects that he and I talked about.

You flatly denied that saints were aware of our actions on earth, when you wrote: “We have no indication saints can see us, since we can’t see them.” I replied with Hebrews 12:1 and Steve added: “Saints do know what is going on . . . evidenced by Samuel knowing what was and what had been happening to Saul.”

Now you go right back to talking about necromancy, where we all agree in the first place. We’re saying that there are relevant considerations beyond that sin. And these support important aspects of the Catholic doctrine of the communion of saints.

You believe there is some contact with the dead. That’s good. I was generalizing, in referring to the “presuppositions of Protestants.” One must always generalize when talking about Protestants, because you guys have so many internal disagreements. There’s not enough time in the day to describe seven different beliefs about any given topic, so we resort to generalizing.

But it’s true that I could have written, “presuppositions of many Protestants.”

Note also that Samuel (like Abraham in Luke 16) never says that Saul shouldn’t ask him for advice (i.e., in effect, essentially the same as “praying” to him, or invoking him, since he has departed from the earth).

Rather, he notes the simple fact that the Lord had already turned against Saul; therefore, there was nothing left for Samuel to tell him. In other words, it would be giving advice that is impossible to give, given God’s expressed will. So Samuel says, “Why then do you ask me, since the LORD has turned from you and become your enemy? The LORD has done to you as he spoke by me . . .” (1 Samuel 28:16-17a)

If Protestant theology of opposition to the invocation of saints were true, Samuel should have said, “Why then do you ask me, since God has forbidden all invocation of departed persons. You have to ask God only.”

First things first. If the very communication — no matter what it was about, was absolutely forbidden, then this would have been noted, just as angels and apostles informed people that they shouldn’t be worshiped: that this was a basic category mistake.

Therefore, we conclude that since he didn’t do this, such communications are not absolutely forbidden, and that invocation of saints is indeed permitted. Samuel was simply saying that there was nothing for him to say in this instance, since it would contradict God’s will; not that he could never possibly say anything in reply, because no one can invoke anyone other than God.

The related passage you brought up supports my point as well:

1 Chronicles 10:13-14 So Saul died for his unfaithfulness; he was unfaithful to the LORD in that he did not keep the command of the LORD, and also consulted a medium, seeking guidance, [14] and did not seek guidance from the LORD. Therefore the LORD slew him, and turned the kingdom over to David the son of Jesse.

The text doesn’t say that he should not or could not ever seek guidance from Samuel. He was wrong in not seeking it from the Lord and seeking it from a medium. So, once again, if Samuel believed in your theology, he should have told Saul, “Why then do you ask me. That’s a sin! You can only ask the Lord!” Instead, he sees himself (as all prophets do) as the representative of God: “The LORD has done to you as he spoke by me . . .” (1 Samuel 28:17a). He spoke for God, just as the prophet Nathan later did, in confronting King David for his sin.

Lastly, regarding Isaiah 8:19 that you brought up, of course you didn’t cite the whole verse, which reads: “And when they say to you, ‘Consult the mediums and the wizards who chirp and mutter,’ should not a people consult their God? Should they consult the dead on behalf of the living?”
Obviously, it is condemning occultic practices. Catholics and Protestants don’t disagree as to the wrongness of those, so it’s not an issue between us. It’s what is called a “moot point.”
I’m very grateful for this dialogue, because as a result of your challenges, I’ve been intellectually stimulated to come up with new arguments I never thought of before. Thanks!
Previous Post 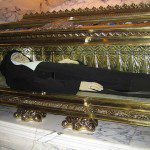 May 5, 2017
Dialogue on Sacramentalism, Holy Objects, and Relics
Next Post 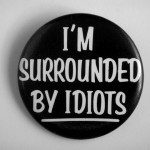 May 6, 2017 Is Christianity Unfalsifiable? Is Empiricism the Only True Knowledge?
Recent Comments
0 | Leave a Comment
Browse Our Archives
Related posts from Biblical Evidence for Catholicism