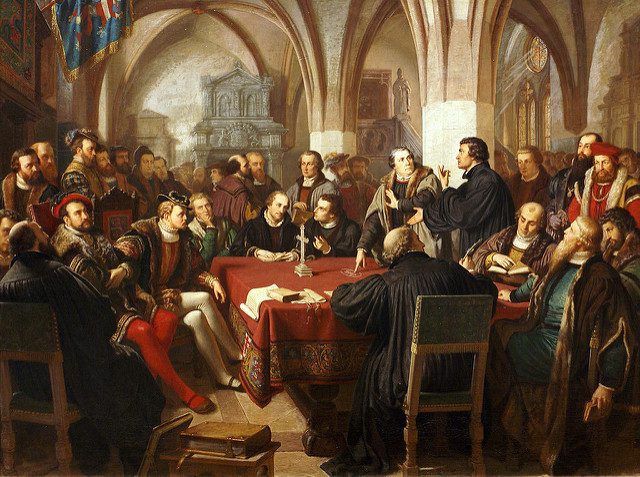 I’ve noted in the past, Martin Luther’s utter disdain for the “sacramentarians”: people who denied the Real Presence in the Eucharist: folks like Zwingli and Oecolampadius. He thought they were damned. I just discovered today something I hadn’t noticed before: these Swiss “reformers” (along with comrade Martin Bucer) apparently had denied that Luther and his Lutheran comrades were Christians before Luther had made his negative judgment on them (thus, perhaps accounting for some of the extra venom of Luther’s replies to them in the period of 1526-1528).

I found this in footnotes in Luther’s Works (LW) to Luther’s treatise, That These Words of Christ, “This is My Body,” Etc., Still Stand Firm Against the Fanatics (published in English translation in Vol. 37, p. 13 ff.). The editors documented these charges to substantiate and give background to Luther’s descriptions of their opinions of him, and of Lutherans, in the text. For example:

Besides, we godless and unforbearing “un-Christians” must put up with having these holy and moderate teachers revile us as idolaters and having our God called the baked God, the edible and potable God, the bread-God, the wine-God, and ourselves called God-forsaken Christians and such names. This altogether venomous, devilish abuse exceeds all bounds. Now a person would rather be upbraided for being full of devils than have a “baked God.” ( p. 22 )

Since we “un-Christians” and unforbearing heathen, I say, must suffer such horrible slander and shameful vilification from them, they, as the holy Christians . . . they regard me as full of devils. ( p. 23 )

The footnotes document these charges:

Notably, Zwingli denied the sacraments any power of transference of grace whatsoever:

Everyone must be astonished at the harsh and presumptuous spirit of the man . . . The opinion of posterity will be that Luther was . . . a man ruled by criminal passions.

Luther’s rude hostility might be allowed to pass would he but leave intact respect for Holy Scripture . . . What has already taken place leads us to apprehend that this man will eventually bring great misfortune upon the Church. (Letter to Martin Bucer, December 8, 1543; in Grisar, Luther, Vol. 5, 409 and III, 417)

“Ruled by criminal passions,” huh? Luther doesn’t even “respect” the Bible? And he brings “great misfortune upon the Church”? Even John Calvin, generally more respectful of Luther, had his moments of candor (?):

. . . if Luther has so great a lust of victory, he will never be able to join along with us in a sincere agreement respecting the pure truth of God. For he has sinned against it not only from vainglory and abusive language, but also from ignorance and the grossest extravagance. For what absurdities he pawned upon us in the beginning, when he said the bread is the very body!

And if now he imagines that the body of Christ is enveloped by the bread, I judge that he is chargeable with a very foul error. What can I say of the partisans of that cause? Do they not romance more wildly than Marcion respecting the body of Christ? . . . (Letter to Martin Bucer, January 12, 1538; in John Dillenberger, editor, John Calvin: Selections From His Writings, Garden City, New York: Doubleday & Co. [Anchor Books], 1971, p. 47; Calvin’s letter to Martin Bucer in 1538 was translated by Marcus Robert Gilchrist)

Okay. So Calvin thinks that Luther has a great “lust of victory” and is unable or unwilling to respect “the pure truth of God.” He has “sinned” greatly in terms of “vainglory and abusive language” and was weighed down by “ignorance and the grossest extravagance.” He taught “absurdities” in areas as important as the Eucharist and is thus guilty of “a very foul error”: so bad that he “romance[s] more wildly” than the heretic Marcion. 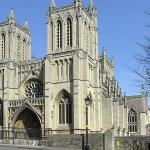 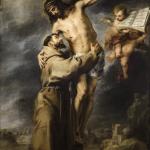 September 13, 2017 Forbidding Marriage? Consecrated Virginity & the Catholic "Both / And"
Recent Comments
0 | Leave a Comment
Browse Our Archives
get the latest from
Biblical Evidence for Catholicism
Sign up for our newsletter
POPULAR AT PATHEOS Catholic
1 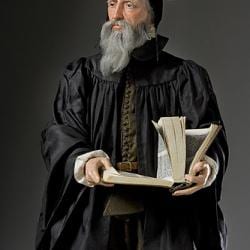