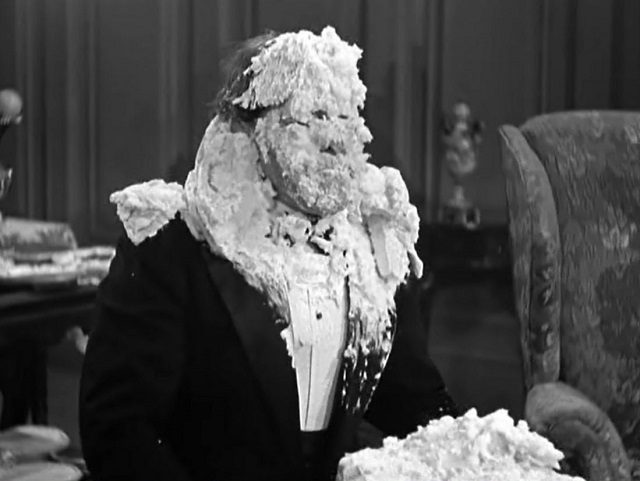 Anyone who boldly ventures out to attempt serious rational discussion with the inimitable Christopher Ferrara, inevitably ends up like this. (I’ve had some firsthand experience, myself). Thanks for the laughs, Chris! If he only knew that the pie was really on his face . . .

Chris Ferrara did his usual mocking hit piece of the article by Dr. Fastiggi and Dr. Goldstein (which defended Pope Francis) at the radical Catholic reactionary Remnant site. Here are some pathetic highlights (his words in blue throughout):

The authors know full well that pursuant to Amoris Laetitia (AL) Francis wishes the bishops to admit public adulterers in “second marriages” to the sacraments while continuing their adulterous relations during an ill-defined, open-ended “process of discernment.”

Knowing all of this full well, Fastiggi and Goldstein dishonestly reduce the incontrovertible evidence that Francis has approved and orchestrated a catastrophic practical break with the Magisterium . . .

Having stated their patently dishonest premise, which allows them to ignore reality, Fastiggi and Goldstein then proceed to their false conclusion, which also ignores reality: . . .

. . . Francis . . .  is undeniably promoting the heterodox reading of AL they pretend, for purposes of their dishonest argument, he has not approved.

. . . the Magisterium that Francis is so clearly acting to subvert.

. . . a wayward Roman Pontiff observes the chaotic scene he himself has created, winking and nodding his approval, which they pretend not to see.

Fastiggi and Goldstein are not defending the Faith. They are defending Francis, no matter what he says or does. But this is only in keeping with the neo-Catholic defense of novelty as paramount. That defense requires them to be legalists and latter-day Pharisees, harping on the law while ignoring—or, if necessary, misrepresenting—the facts. And it is precisely the legalism of latter-day Pharisees that has made possible the auto-demolition of the Church over the past fifty years: Obey without question, for authority has spoken (or so it is claimed). Deny the evidence of reason and even the evidence of your senses if what they tell you interferes with your blind obedience.

Fastiggi and Goldstein are foot soldiers of a Leviathan Church in which the dictates of Hobbes’s “mortal god,” the earthly ruler of the commonwealth, take precedence over the dictates of the Immortal God in heaven and positive law trumps divine law.

Fastiggi and Goldstein do not understand that this is their function in the present state of the Church because the narrative to which they have committed themselves—an unwavering defense of novelty in the name of authority—does not permit them to understand it. They think they are defending the Faith, but in reality they are defending its dissolution.

All classic melodramatic, nearly hysterical reactionary polemics and histrionics, with all the usual catch-phrases (especially the ubiquitous phrases, “auto-demolition” and “neo-Catholic”). Dr. Fastiggi (surely exercising the patience of Job) responded in the combox:

I would like to thank Christopher Ferrara again for calling attention to an article I co-authored with Dr. Goldstein in La Stampa. I give him credit for his colorful style. Unfortunately, Mr. Ferrara provides no real evidence for his claim that Pope Francis “wishes the bishops to admit public adulterers in ‘second marriages’ to the sacraments while continuing their adulterous relations.” He mentions the Holy Father’s letter to the Buenos Aires bishops, but he fails to take into account that the statement of those Argentine bishops can be interpreted in an orthodox way, as Cardinal Müller told Edward Pentin in a Sept. 28 interview published in the National Catholic Register. In fact the statement of the Argentine bishops only speaks of the possibility of “access to the sacraments of Reconciliation and the Eucharist.” This could reasonably be interpreted as going to confession before receiving Holy Communion. The same applies to statements of Pope Francis and Cardinal Schoenborn mentioned by Ferrara. Pope Francis defers to the exposition of Amoris laetitia by Cardinal Schoenborn given in April 2016 when the exhortation was made public. I have read the Cardinal’s exposition in both Italian and English, and I only find mention of the help of the sacraments in certain cases. Once again, Mr. Ferrara assumes this means access to Holy Communion without prior sacramental confession. With regard to the letter thanking the Bishops of Malta, it should be noted that Edward Pentin mentions a letter of Cardinal Baldiserri not a letter of Pope Francis. Moreover, this letter has not been made public so we don’t know exactly what it says other than an expression of thanks. This seems to be very thin evidence for claiming Pope Francis wishes the bishops to admit public adulterers to the sacraments while continuing in their adulterous relations. As a lawyer, Ferrara should have a better sense of what really counts as evidence. As a Christian, he should also be mindful of the command against bearing false witness.

I apologize ahead of time if I misconstrued his words. I believe, though, my question is reasonable in light of his reference to a “Leviathan Church” distinct from “the dictates of the Immortal God in heaven.”

If Dr. Fastiggi wishes to continue to pretend, despite a growing mountain of evidence, that Pope Francis has not in fact approved of the admission of public adulterers to Holy Communion–just as he did when Archbishop of Buenos Aires, and just as he did with the woman he telephoned in Argentina—then I cannot help him.

As for my metaphorical reference to a “Leviathan Church,” I am afraid Dr. Fastiggi has succumbed to an unfortunate literal-mindedness. To make it clear for him, I am contending that he and his co-author treat the Pope as if he were the absolute ruler of Hobbes’s Leviathan. I do not, as should be obvious, argue that this Leviathan Church actually exists. That it does not and cannot exist is precisely my point.

Dr. Fastiggi’s inapt citation to Canon 751 and his clumsy and insulting questions about my “standing in the Catholic Church” and whether I am “refusing submission to the Roman Pontiff” demonstrate a pronounced lack of comprehension of pertinent ecclesiological and theological basics, not mention a rather embarrassing lack of rhetorical finesse. Raising objections to a papal document because it appears to depart from sound orthodoxy is hardly “refusing submission to the Roman Pontiff,” who has not, at any rate, actually commanded anyone to “submit” to anything via AL.

I respectfully suggest that Dr. Fastiggi’s comments evince a need for serious study and reflection before he ventures further opinions on this controversy in public.

I am grateful for your clarification about the Leviathan Church. I suspected this was a metaphorical reference, but I was not sure. Invoking such hyperbolic metaphors is always risky, especially when they are inappropriate. I recognize your right to raise concerns about a papal document. Such concerns, however, must be expressed with due reverence to the Roman Pontiff and with justice and charity. I am not persuaded by the “mountain of evidence” you have provided for your accusations against Pope Francis. It seems, therefore, that you cannot help me. Oremus pro invicem.

Photo credit: From the Kiwi Report website: “Hardcore Fans of The Three Stooges Need to Know These Facts” (Stephanie Stevens, 1-11-17) 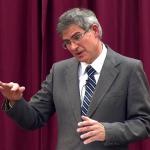 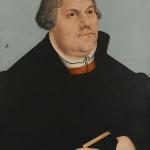 October 12, 2017 Was Luther in His Old Age in Agony & Bitter About Lutheranism?
Recent Comments
0 | Leave a Comment
Browse Our Archives
Follow Us!