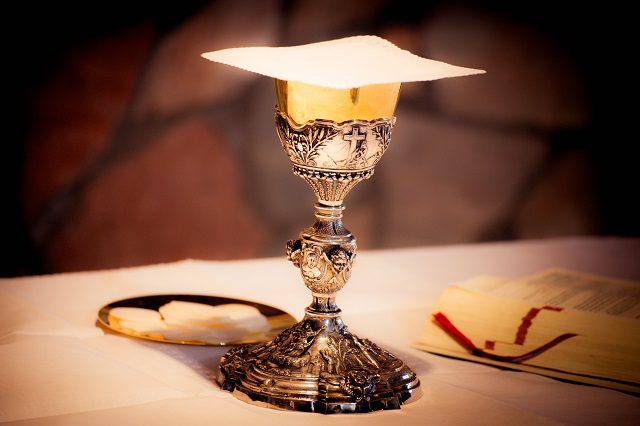 Questions are good! Apologists are happy to answer, as best we can.

The words of the Protestant inquirer will be in blue.

The Eucharist, as taught today by Catholics was not present in the early days.

The Eucharist was instituted at the Last Supper and became the central focus of early church gatherings:

Luke 24:35 (RSV) Then they told what had happened on the road, and how he was known to them in the breaking of the bread.

Acts 2:42, 46 And they devoted themselves to the apostles’ teaching and fellowship, to the breaking of bread and the prayers. . . . And day by day, attending the temple together and breaking bread in their homes, they partook of food with glad and generous hearts,

Acts 20:7 On the first day of the week, when we were gathered together to break bread,

The Apostle Paul refers to the “table of the Lord” and “altars” in the context of Christian worship. That only meant one thing: sacrifice, and since there were no more sacrifices of lambs and goats, it referred to Jesus’ sacrifice on the cross and the Eucharist:

1 Corinthians 10:17-21 Because there is one bread, we who are many are one body, for we all partake of the one bread. Consider the people of Israel; are not those who eat the sacrifices partners in the altar? What do I imply then? That food offered to idols is anything, or that an idol is anything? No, I imply that what pagans sacrifice they offer to demons and not to God. I do not want you to be partners with demons. You cannot drink the cup of the Lord and the cup of demons. You cannot partake of the table of the Lord and the table of demons.

Paul is talking about heathen practices, but also about the Eucharist (in contrast). This is made quite clear in context, in what Paul was talking about just before this passage. He starts out by discussing idols (10:14) but then he gets eucharistic and equates the cup of communion “the blood of Christ” and the consecrated bread of communion the “body of Christ” (10:16). So the Eucharist cannot be divorced from the overall context of the passage. The heathen offer sacrifices to idols, but Christians offer the Sacrifice (Jesus) to God: i.e., the sacrifice of the Mass.

The doctrine of the Eucharist has developed, for sure (transubstantiation), but all the essential elements were there from the beginning, in John 6 and the institution at the Last Supper.

We have no reason whatsoever (no factual information) to think that the apostles ever turned bread and wine into the body and blood of Jesus.

Again, I must disagree. That’s not, I submit, what the Apostle Paul thought, as we saw in 1 Corinthians 10:16 above. In 1 Corinthians 11:27-30 Paul states that partaking of Communion “in an unworthy manner” causes one to be guilty of “profaning the body and blood of the Lord.” That is Real Presence. He’s not just saying one is “abusing the memory of the Lord” or some such, as we would say if someone spit on a grave or something. No; it is profaning His actual body and blood, because that is what Paul believes was present in the Eucharist.

Martin Luther thought both of these texts were absolutely clear and compelling. He wrote about 1 Corinthians 10:16:

It is not sound reasoning arbitrarily to associate the sin which St. Paul attributes to eating with remembrance of Christ, of which Paul does not speak. For he does not say, “Who unworthily holds the Lord in remembrance,” but “Who unworthily eats and drinks.” (Ibid., 183-184)

If Jesus wanted to teach what Catholics teach on this question, He would have made it very clear so there would be no confusion. And the Last Supper was not regarded as an ongoing ritual.

He was absolutely clear at the Last Supper (“This is My Body”). And He was so clear in the discourse in John 6 that it is the only known record of disciples ceasing to follow Jesus, because they couldn’t handle the teaching of Real Presence:

John 6:52-66 The Jews then disputed among themselves, saying, “How can this man give us his flesh to eat?” So Jesus said to them, “Truly, truly, I say to you, unless you eat the flesh of the Son of man and drink his blood, you have no life in you; he who eats my flesh and drinks my blood has eternal life, and I will raise him up at the last day. For my flesh is food indeed, and my blood is drink indeed. He who eats my flesh and drinks my blood abides in me, and I in him. As the living Father sent me, and I live because of the Father, so he who eats me will live because of me. This is the bread which came down from heaven, not such as the fathers ate and died; he who eats this bread will live for ever.” This he said in the synagogue, as he taught at Caper’na-um. Many of his disciples, when they heard it, said, “This is a hard saying; who can listen to it?” But Jesus, knowing in himself that his disciples murmured at it, said to them, “Do you take offense at this? Then what if you were to see the Son of man ascending where he was before? It is the spirit that gives life, the flesh is of no avail; the words that I have spoken to you are spirit and life. But there are some of you that do not believe.” For Jesus knew from the first who those were that did not believe, and who it was that would betray him. And he said, “This is why I told you that no one can come to me unless it is granted him by the Father.” After this many of his disciples drew back and no longer went about with him.

If you look at what was believed and done right after Jesus died, arose and ascended into heaven, you will find that there wasn’t a Mass within a million miles around.

To the contrary, the Christians were breaking bread every Sunday (which means the Eucharist, as we know from 1 Cor 10:16). They believed in Real Presence, as we know from Paul and Jesus and from historians of the early Church. The notion of the sacrifice of the Mass is also a developing, widespread early occurrence and has many biblical indications.

The transubstantiation wasn’t even thought of, let alone claimed, at that time.

Neither were the full-blown doctrines of the Trinity or the Two Natures of Christ or the canon of the New Testament or original sin or many doctrines that fully developed over centuries. This poses no problem for us because it applies to almost all doctrines. The essence of the Catholic Eucharist is the Real Presence of Christ. Transubstantiation explains in more technical philosophical language what takes place. It’s a development of eucharistic understanding: increased knowledge of what was already believed (just as with the Trinity, etc.).

Jesus made abundantly clear that the Eucharist was His actual Body and Blood, in some mysterious fashion. Jesus didn’t give exhaustive explanations of the Trinity, either, but He gave us more than enough teaching to build upon and develop (not change). If the Eucharist is His Body and Blood, then one has to try to understand how it got to be that way, while continuing to look like bread and wine. That’s what transubstantiation does. But it adds nothing to the original teaching that it is His body and blood, that is explicitly stated in Scripture by Jesus and Paul.

Even today, if you ask Catholics if they believe in the transubstantiation, over half of them will say no. That’s definitely not a majority. I truly believe that if you asked every Catholic whether they believed all that was printed in the catechism, an overwhelming percent of them would say no. I’ve seen polls alluding to such. So, the disagreement about “truth” has been around for about 2,000 years I would imagine… and will be around for another 2,000 at least.

It’s irrelevant to take a head count of what individual Catholics believe, because what the Church believes is determined by looking at its official statements, as with any Protestant group. There will always be people in any group who are either ignorant or dissenting outright. 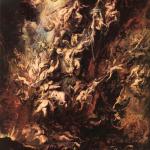 January 9, 2018
Luther: God Predestines Reprobation of the Damned
Next Post 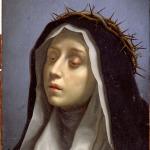 January 10, 2018 St. Catherine of Siena Received Communion in the Hand
Recent Comments
0 | Leave a Comment
Browse Our Archives
get the latest from
Biblical Evidence for Catholicism
Sign up for our newsletter
POPULAR AT PATHEOS Catholic
1