“The Catholic Verses”: James White Ain’t Got a Clue

I think it would be well worth it also, at this juncture, to clarify exactly what the intention of that book was. It is not biblical commentary per se (though it heavily touches upon that due to its subject matter), but something a bit different, and, I think, unique in Catholic apologetic literature (it was initially the conception of my publisher that was presented to me).

It’s all made very clear in the Introduction of the book, that can be read on its info-page.

James White didn’t seem to understand this in his multi-part critique / hit piece against the book, that ended up in pure personal insult, so that I ceased interacting with his “review” at a certain point, disgusted that he couldn’t stay on topic. And of course I was — you guessed it! — accused of inability and cowardice because I got tired of the mudfest.

White, in fact, in a recent hit piece, er, “review” of my latest book, The One-Minute Apologist, engaged in a gross caricature of my actual argument in one section. When corrected, he fled for the hills, as always.

It’s very common for anti-Catholics to go after arguments I didn’t even make (just recently I have demonstrated several examples of this annoying tendency). My critics in those instances never correctly understood the opposing (my) argument in the first place.

But anyway, when that exchange was still remotely rational, I tried vainly to explain to Bishop White (his words in blue below, from one of his articles) what the purpose of the book actually was:

And the first thing to note about Armstrong’s work at this point should have a rather familiar ring to it if you have been following the Dave Hunt series: there is no meaningful exegesis offered to substantiate these grand claims by Armstrong. Examine pp. 38-40 for yourself, and you will find no discussion of grammar, lexicography, syntax, or anything else relevant to meaningful exegesis.

I make no pretense of being a professional Bible scholar. My book is strictly popular apologetics. But even an amateur exegete like me can (like Balaam’s ass) point out lousy, irrelevant “arguments” from “professional” exegetes like John Calvin (a primary purpose of the book).

. . . He cites my comments from The Roman Catholic Controversy in this section rather extensively. So, I wondered if he would attempt to respond to the exegesis of 2 Thessalonians 2:15 that I offered in the same work. I would expect that at least the substance of that section would have to be refuted for Armstrong to feel he had at all proven his case.

Why does White in particular have to be refuted to prove my case? The book was mostly about historic Protestant exegesis. Most folks would think Calvin is a bit more important and influential historically than White, so I dealt with him. White dealt in depth with the issue of “Moses’ Seat,” so I cited him in that section.

. . . I dealt with Calvin’s “exegesis,” and White has totally ignored that, so he is simply not critiquing my book thus far.

Now, if the standard of being “confounded” involves presenting a compelling, exegetically sound, contextually derived interpretation of a passage resulting in a clear vindication of the Roman Catholic reading . . .

The book was not primarily exegetical; rather, it was designed to show the shortcomings and inadequacies of Protestant commentary when it comes to these passages. One can point out holes in an opposing position without (technically) engaging in the same thing (exegesis proper). If, for example, someone made a simple logical error in an extremely complicated theory in physics that I knew nothing whatsoever about, it would still be rational and acceptable for me to point it out. I made all this very clear in my Introduction, which can be read online. Once White figures out my goal and purpose in the book, perhaps his critiques will have some relevance and not descend into straw men and non sequiturs. As it is, he hasn’t made a single extended argument against any particular argument of mine in this section.

(though it is not referred to in his new book, which is especially interesting regarding the 24 page chapter on James 2:14-24 that Armstrong neglects in his book),

Again, White strangely assumes that I always have to deal with his arguments, when my purpose was mainly to examine historic Protestant commentary, from major figures in its history (or does White claim to be that?).

. . . My book is about how Protestants rationalize, special plead, avoid, obfuscate, etc. regarding biblical verses which (from our perspective) suggest some distinctive in Catholic theology. White’s aim above, on the other hand, is to exegete a passage which he considers a strong proof text for Protestantism. Apples and oranges. Perhaps a future book of mine can be devoted to showing how Protestant proof texts are utterly inadequate and able to be sufficiently refuted from a Catholic point of view and dismissed (sounds like a fun project to me). But that time is not now, in the context of the ongoing critique of my book,. . .

[I did refute his atrocious, fallacy-ridden chapter on James and faith and works in a 2013 paper (which he utterly ignored, of course):

The book pretends to “confound” Protestants with biblical passages, remember? I did not choose the title, Mr. Armstrong did.

Technically, I am not trying to “confound” anyone. It is the Bible which gives Protestants difficulty. I’m merely documenting exegetical bankruptcy, confusion, or irrationality.

And the only way to do that is to provide a meaningful interpretation of those passages.

That’s logically distinct from critiquing Protestant exegesis. Biblical evidence for Catholicism is dealt with in my first two books.

. . . Armstrong also informs us that he doesn’t read my books. That’s OK. If he wishes to remain ignorant of the exegetical arguments presented against his position, I have no reason to encourage him to do otherwise.

This book is about failed Protestant attempts to refute Catholic biblical prooftexts. White has yet to deal with those.

Once again, in citing Phil. 3:10 and Rom. 8:17, Armstrong does not consider it necessary to actually handle the verses, establish context, meaning, anything exegetical.

This gets back to the nature and purpose of the book; already discussed.

. . . Hence, to seriously suggest that he is “confounding” Protestants on the basis of Bible passages, Dave Armstrong would have to wrestle with a presentation such as Lightfoot’s, . . .

White can go on all day citing commentators I didn’t deal with. But my purpose was to show the bias and irrationality so often present in John Calvin’s and other influential Protestant commentators (not to engage in full-fledged exegesis, for which I’m not qualified).

. . . For obviously, a Protestant can read 2 Corinthians 4:10 and say, “Yes, I die to sin daily, not sacramentally or partially so that I remain imperfect (as in Roman theology), but as the result of the perfect standing that is mine in the righteousness of Christ the Holy Spirit works within me to conform me to the image of Christ and by so doing brings the reality of my union with Christ in His death so that His life will be ever more seen in me.” How have I been “confounded” in this passage?

A true critique of what I was doing here would have to deal with Calvin’s and Barnes’ commentary. A presentation of one Protestant perspective on it and an examination of Protestant dealings with Catholic proof texts are two different things. I’m doing the latter; White the former. Never the twain shall meet.

We see that he follows his master Calvin in this tendency to personal attack at the expense of rational argument. Now, I want to know: how is the above to be regarded as “biblical exegesis”? And if Calvin can lie about Catholics and urge readers to hate them, why is it that I can’t even critique tendencies in Protestant exegetical circles? If White claims I am not doing exegesis (even when I reiterate endlessly that this was not my primary purpose), why doesn’t he criticize Calvin for failing to do so when he is supposed to be doing so?!

As always with Bishop White, the discussion never got anywhere because it wasn’t a real discussion or dialogue in the first place (it never is with him; I have tried for 12 years to no avail). His only aim and goal is to make a fool out of me and utterly discredit my work. He didn’t give a fig about what my actual purpose was in the book, or my specific arguments. He simply spread his own agenda. I proved it again and again.

I’m not gonna sit here and constantly explain that my critic is attacking an argument that I never made and vainly protest against mythical fallacies that I supposedly committed (my arguments not being rightly understood). That gets old yesterday, and I have no patience for it at all anymore.

As I often say, no one would be more pleasantly surprised than myself, to see something different for a change from an anti-Catholic who thinks that Catholics aren’t Christians. With that degree of astonishingly irrational baggage going in, one learns to set the bar of expectations pretty low. 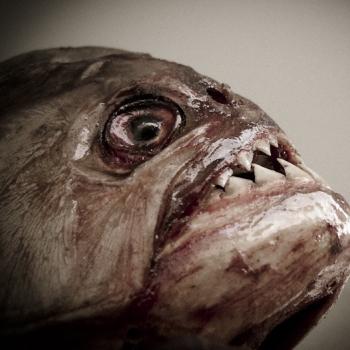