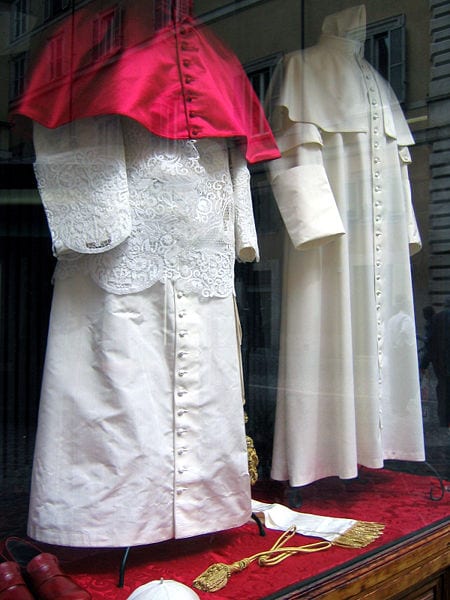 Now we are hearing complaints that Pope Francis didn’t or doesn’t wear the papal mozzetta, which is “a short elbow-length sartorial vestment, a cape that covers the shoulders and is buttoned over the frontal breast area” (Wikipedia). The custom had already been changed by Pope John Paul the Great, as the same article notes:

The winter mozzetta and the Paschal mozzetta fell into disuse during the pontificate of John Paul II (1978–2005), but their use was briefly restored by Pope Benedict XVI (2005–2013) before being discontinued again by Pope Francis. Benedict wore the winter mozzetta during the papal station at the image of the Madonna near the Spanish Steps that traditionally marks the beginning of Rome’s winter season, and he wore it on all the occasions in the winter season where this garment was appropriate. The white mozzetta was reintroduced during the Octave of Easter in 2008. This change between winter and summer garments was very practical, given the oppressive heat of the Roman summer.

One of my Facebook friends asked me about this, and contended that this sort of symbolism is crucially important and directly indicative of various Catholic beliefs (therefore, the pope’s behavior was highly scandalous and suspect); also that even if the motive was truly humility, what do we make of previous popes who wore this and other attire that may have fallen out of use. Are they, therefore, to be considered prideful? I replied:

I couldn’t care less what he chooses to wear. Much ado about nothing. Popes can do whatever they want to in these matters. Being hung up on it is to me a species of Pharisaical legalism. Pope St. John Paul II was buried in a plain wooden box. Is that some terrible abandonment of tradition, too? I thought it was beautiful.

Symbolism per se is great. It’s not dogma and can change. Jesus didn’t do a host of things He was “supposed” to do, like the incident when He and His disciples didn’t wash their hands properly and He had an argument with the disciples, noting that David ate the showbread that only the priests were supposed to eat. Different times call for different symbolism. It doesn’t make the older usages “wrong.”

I wrote about these sorts of issues at some length in my post, Papal Ring-Kissing, Gossip, & Pharisaical Nitpicking (3-29-19). There I documented changes in papal clothing / attire customs such as the following:

1) Kissing the papal ring (when and by whom). Popes Benedict and St. John Paul II didn’t always observe this; Pope Gregory XVI (r. 1831-1846) did not on at last one occasion that we know about. Even the traditionalist / reactionary superhero Pope St. Pius X (r. 1903-1914) didn’t allow  the eminent [James Cardinal] Gibbons to kiss his ring.

2) Use of the papal tiara, or crown, was discontinued by Pope John Paul I, and Pope Benedict removed it from his coat of arms.

Since the inauguration of Pope John Paul I, it has not included the 820-year-old (1143–1963) papal coronation ceremony.

It was in the 11th century that the inauguration took the form of a coronation. Along with other ceremonies used at papal inaugurations, a coronation became part of a pope’s inauguration ritual from the time of Pope Nicholas II (1059–1061) until 1963.  . . .

His successor, Pope John Paul II, followed suit, maintaining the changes made by his predecessor, though with additions. . . . Four modern popes have now used an inauguration ceremony without coronation: Pope John Paul I, Pope John Paul II, (both in 1978), Pope Benedict XVI (2005) and Pope Francis (2013). . . . Pope Benedict XVI maintained those changes and also shortened, as explained below, the ceremony of homage previously paid at a papal inauguration by each cardinal individually, repeating the “act of homage and obedience” made in the conclave to the new pope before the announcement of his election to the people. . . . Instead of having each of the more than one hundred cardinals kneel before the Pope individually to do him homage, twelve people, lay as well as clerical, did so . . .

5) Pope St. Paul VI discontinued the flabella: large ceremonial fans made of white ostrich-feathers, which were used in conjunction with the Sedia gestatoria.

7) Pope Benedict XVI introduced a new type of pallium that is worn only by popes.

8) The Fanon: a papal vestment of silver and gold stripes, has ceased being commonly used, but Popes St. John Paul II and Benedict XVI did wear it on a few occasions.

9) Pope St. Paul VI discontinued the use of the Sub-cinctorium.

10) Pope St. Paul VI discontinued the use of the Mantum as well.

11) The camauro, a red velvet cap, was discontinued by Pope St. Paul VI, but was revived by Pope Benedict XVI.

12) Use of the umbraculum (Latin for little umbrella) has been discontinued.

What I wrote in my earlier paper on this topic will make a fitting conclusion now:

So, as we readily see, these papal ceremonial customs (not unalterable dogmas) are developing; even changing (up to and including ceasing altogether) all the time (even dogmas also develop, after all). It’s nothing whatsoever to get alarmed about, let alone to grumble and gossip about. It doesn’t “prove” that someone doesn’t want to be pope, or is a heterodox theological liberal (or some deranged narcissistic sociopath, for heaven’s sake).

I make many similar statements there and provide related Scripture as well. Anyone wishing to pursue the topic further can simply read that; no need to replicate all of it here. But the above bullet points may provide a handy summary if the subject comes up.

I say again: “Much ado about nothing.”