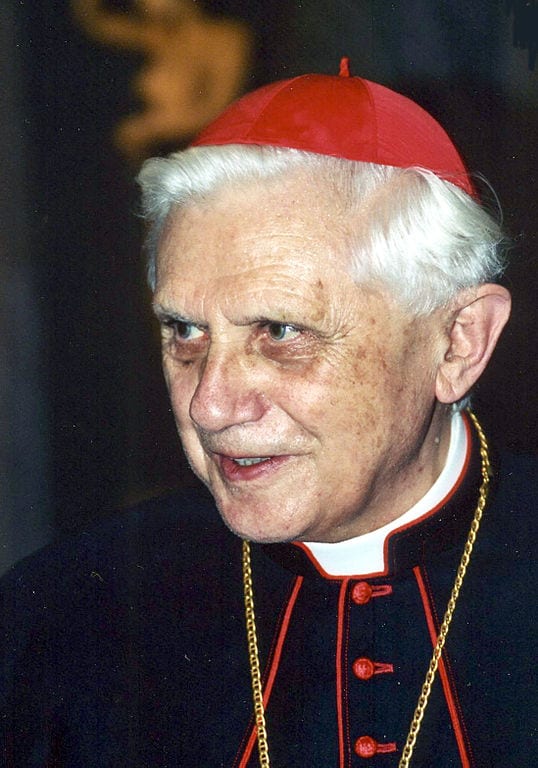 Fr. Angelo Geiger of Mary Victrix fame (I love his stuff) — who celebrates the Tridentine Mass –,  has written about the famous Cardinal Ratzinger “banal” quote and folks ignoring what Pope Benedict XVI stated as pope (he’s even been called an ultramontanist as I have, innumerable times). He wrote in the comments for his article, “The Spirit of Summorum Pontificum“ (11 March 2012):

[T]o show context and the actual nuance of thought of Ratzinger is not prooftexting. It is simply illustrat[ing] that his thought is complex and defies being used as a club, unless of course, one cherry-picks the quotes one likes and disregards those one doesn’t. The trads (not you necessarily) quote Cardinal Ratzinger (not Pope Benedict) out of context from a preface to a book (not a magisterial document) and suggest it proves something, and then when as Pope he speaks magisterially on religious liberty (see, for example 26-27), we are told not to be ultramontanists . . .

In the article itself, Fr. Geiger commented on the famous “banal” quote:

Beyond this Cardinal Ratzinger has leveled qualified criticisms of the way in which the new liturgical books came into existence, saying that they appeared to be “put together by professors,” and not as a result of “a phase in a continual growth process.” He said: “I do regard it as unfortunate that we have been presented with the idea of a new book rather than with that of continuity within a single liturgical history” (Feast of Faith, 87). In his preface to the French edition of The Reform of the Roman Liturgy by Klaus Gamber (1992), Ratzinger’s criticisms are more stinging and appear to support the position of Gamber, which is that the new liturgical books could be revised to reflect more accurately the principles laid down by Vatican II, and hence, be drawn more fully within Tradition. In that preface, he contrasts the Western understanding of liturgical development with the Eastern notion that the liturgy is a “reflection of eternal light,” and then writes:

What happened after the Council was totally different: in the place of liturgy as the fruit of development came fabricated liturgy. We left the living process of growth and development to enter the realm of fabrication. There was no longer a desire to continue developing and maturing, as the centuries passed and so this was replaced—as if it were a technical production—with a construction, a banal on-the-spot product.

This statement might be taken in one of several ways: as pertaining simply to the abuses of the new Mass and not to the new books themselves; as pertaining to the very novus ordo itself as codified in the Missal of Paul VI; as pertaining to the manner of presentation of the books, as the work of professors and not as organic development. I suggest that the meaning of the Cardinal is nuanced, tending toward the third option, because his earlier statements and those of his pontificate suggest that he is not denigrating the novus ordo as such. Again, to be clear, both before and after his 1992 preface for Gamber’s book, his remarks indicate that he favors the new liturgical books, even if he hopes for some revisions.

In fact, the principle that motivates his criticisms of the new liturgical books is organic development, and not in any way an argument for a mummified liturgy.  In fact, he suggested in 1981 that those who refuse to accept the liturgical reform mandated by the council are operating on “a faulty view of the historical facts.”  The Cardinal declared that the Missal “both before and after Pius V . . . was subject to a continuous process of purification” and “continued to grow and develop” (“Lecture”).  Furthermore, he said that subsequent editions of the new books

will need to make it quite clear that the so-called Missal of Paul VI is nothing other than a renewed form of the same Missal to which Pius X, Urban VIII, Pius V and their predecessors have contributed, right from the Church’s earliest history. It is of the very essence of the Church that she should be aware of her unbroken continuity throughout the history of faith, expressed in an ever-present unity of prayer (ibid.).

This is hardly a reason to count the novus ordo as a break with the liturgical tradition; on the contrary, it is an affirmation that the actual books in use in 1981, the Cardinal considered to be in actual continuity with the older books.

The article is very long and filled with rich tidbits like the above. He makes a sustained case for Pope Benedict XVI’s love of the New Mass as an organic development of the Old Mass. He does not think the way many traditionalists think regarding the forms of the Mass. Traditionalists who seek to understand the former pope’s true opinions will do well to read it, and perhaps can stop quoting him out of context and purporting to make him express a view that he does not in fact hold. 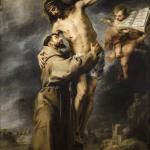 September 10, 2020 Luther & James Swan Blaspheme (Christ's Sinlessness)
Recent Comments
0 | Leave a Comment
Browse Our Archives
get the latest from
Biblical Evidence for Catholicism
Sign up for our newsletter
POPULAR AT PATHEOS Catholic
1