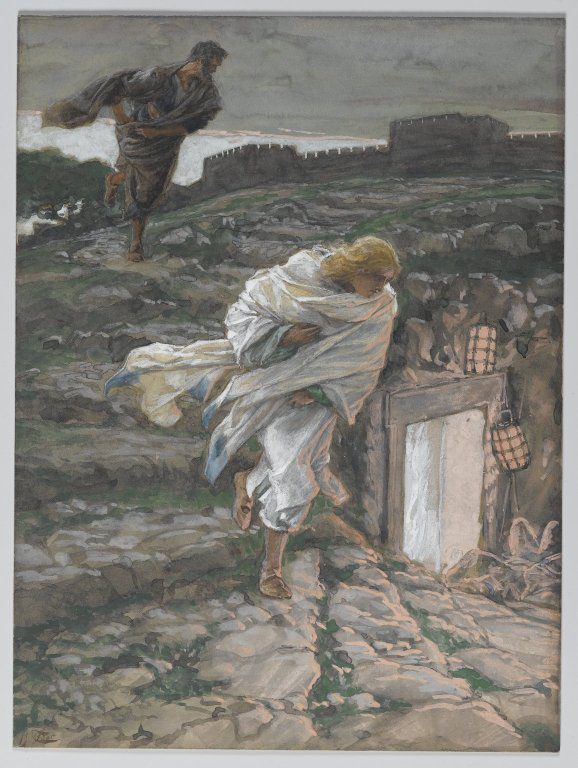 The gospel narratives present several internal contradictions. Mark and Matthew say nothing about Peter or anyone else investigating the tomb. (p. 394)

Then they don’t contradict the other two Gospels on this score, do they? They don’t include “different” stories (let alone “contradictions”), because they have no stories at all about this incident. It’s just more of Alter’s odd, peculiar definition of “contradiction” that has no support in any logical textbook that has existed since the ancient Greeks.

RSV omits this verse because it’s not found in western manuscripts. So here is another version:

Luke 24:12 (NKJV) But Peter arose and ran to the tomb; and stooping down, he saw the linen cloths lying by themselves; and he departed, marveling to himself at what had happened.

Luke 24:12 doesn’t say that Peter “alone” ran to the tomb (which would exclude everyone else). It says that Peter ran to the tomb, without mentioning anyone else (that might have also done it). It’s a logical difference. On a web page that lists many translations of the passage, there was not a single instance of “only Peter” or “Peter alone.” His “stooping down” here doesn’t contradict John’s account, which doesn’t say he stooped from the outside; it says that John (“the other disciple”) did that.

He omits any statement about anyone else going to the tomb. (p. 394)

John’s text seemingly contradicts Luke and declares that two people raced to the tomb, namely, Peter and the disciple who Jesus loved. (p. 394)

It does not contradict. It’s complementary. It may seem odd or strange or something “difficult” that needs to be adequately explained, but it’s not contradictory. Here it is:

Then John adds that it was the other disciple who Jesus loved who entered the tomb only after Peter first entered it. Remarkably, Mark, Matthew, and Luke omit the fact that Peter entered Jesus’s burial place. (p. 394)

Again, strange and something to “figure out”, but not contradictory. And so the subtitle of Alter’s section contains a falsehood (sadly, not uncommon in his book!). But Luke actually does mention others visiting the tomb, twelve verses later:

Luke 24:12 “Some of those who were with us went to the tomb, and found it just as the women had said; but him they did not see.”

The objection falsely assumes that John was intending to say Mary Magdalene was the only woman. John merely showcases Mary Magdalene without any mention of the other women. And just because an account is incomplete, it doesn’t follow that it is in error. Even Luke doesn’t give a complete account of the women who went to the tomb (24:10).

Moreover, John’s account of Mary’s response to Peter and John indicates that he knew other women were with her: “she ran . . . and said to them . . . we do not know where they have laid him” (John 20:2, emphasis added). Luke employs a similar tactic when he first showcases Peter going to the tomb (Luke 24:12), but then later informs his reader that others had gone as well (Luke 24:24).

Alter made many claims of alleged contradictions in the Resurrection accounts earlier in his book. I had neither the patience nor energy to tackle all of them (sort of like having to squat 150 flies at once). But here is a harmony of all of the stories regarding the Resurrection and what happened afterwards, from a Bible questions website, based on the work of Gary Habermas and Michael Licona:

This matches the similar outline given by the late Michael Green in The Empty Cross of Jesus (first ed, p 122). (“Do the resurrection accounts contradict each other?”, Ian Paul, 4-21-20)

Summary: Michael Alter makes several claims of alleged contradiction regarding Peter & John at the empty tomb of Jesus. They all fail the logical smell test as “contradictions.” They’re complementary.