The books and epistles found within the Christian scriptures that relate to Jesus’s resurrection read like completely different stories, not several people witnessing the same event from different vantage points. (p. 427)

I have repeatedly shown that this is not an accurate representation, by refuting bogus alleged “contradictions.” The latter is the “bread and butter” of atheist and other skeptical criticisms of the Bible (their favorite “gotcha!” technique). If they go down in refutation (and the more the merrier!), then the essence and heart of the skeptical anti-biblical (or in this case, anti-New Testament) argument goes down, too.

In the Epistles of Paul there is no mention of any women witnesses. (p. 427)

1 Corinthians 15:6 Then he appeared to more than five hundred brethren at one time, most of whom are still alive, though some have fallen asleep.

Therefore, Paul does mention female witnesses, contrary to Alter’s claim above: just not by specific names.

Christian apologists have offered various explanations for this omission. (p. 427)

I’m sure they have. This is a classic example of a thing that may appear odd or inexplicable from our vantage point (i.e., lack of mention of individual female witnesses); yet it’s no contradiction. Arguments from silence prove nothing. Michael Alter often agrees with that sentiment in his book and correspondence and replies to my critiques. But he readily sees that they prove nothing in views he opposes, while not seeming to notice that they also prove nothing when he uses them.

Alter distinguishes between 16:1-8 and 16:9-16, because many scholars reject the authenticity of the latter verses in Mark. But Alter thinks the evangelists (considering all of their texts or alleged texts) — whoever they are — are a pack of deceptive liars and mythmakers worthy of Tolkien and Homer, out to create legends in the service of a false theology based on lies (Jesus is Messiah and God; He rose from the dead, etc.), and even constantly correcting each other. So why should he care about mostly Christian internecine disputes about texts? He often presents a grossly misleading portrayal of NT texts, in a failed effort to make them fit into his “relentless contradiction” scenario. This is one of innumerable examples of that technique. Here is what the relevant text actually reads:

Mark 16:9 Now when he rose early on the first day of the week, he appeared first to Mary Magdalene, from whom he had cast out seven demons. [“first” also appears in the KJV rendering that Alter has been using in his book]

This is not claiming that Mary Magdalene was the “sole” witness. It says, rather, that she was the “first” witness (male or female). The use of “first” proves that the writer definitely did not consider her the “sole” witness. How difficult was that to ascertain? But Alter missed this crucial consideration. We shall now proceed to see if contradictions are truly present or not in this collection of passages about the risen Jesus and women.

In contrast, Matthew 28:1 and 28:9 report that two women, Mary Magdalene and the other Mary, witnessed a post-resurrected Jesus. (p. 427)

Matthew 28:1 Now after the sabbath, toward the dawn of the first day of the week, Mary Mag’dalene and the other Mary went to see the sepulchre.

Matthew 28:9 And behold, Jesus met them and said, “Hail!” And they came up and took hold of his feet and worshiped him.

Yes, these two women did witness the risen Jesus. But Alter is trying to make out that this contradicts Mark 16:9. It does not. Mary Magdalene was the first to see the risen Jesus (just as another woman: His mother, was the first human being to be made aware that He was conceived as the incarnate God in her womb). Many scenarios can be easily imagined that instantly harmonize the passages.

For example, maybe “the other Mary” happened to be looking away when the risen Jesus suddenly “met them”, so that Mary Magdalene was, technically, the first to see Him; the first person (and woman) to whom He appeared. Or Jesus met Mary Magdalene with no other women around, and then Matthew 28:9 records a second instance of His appearing to her, except with another woman, too.

Luke narrates that no women saw the risen Jesus. (p. 427)

This is incorrect. It simply doesn’t record the instances of women witnessing the resurrected Jesus (another argument from silence that Alter mistakenly thinks holds some weight). To not report that “[females] x and y saw the risen Jesus” — to not say anything about this at all — is not at all, logically, the same as saying, “no [females] ever saw the risen Jesus”. This a huge logical difference.

What it records is that “Mary Mag’dalene and Jo-an’na and Mary the mother of James and the other women with them” (Lk 24:10) saw the empty tomb (24:2-3) and were told by angels that Jesus was risen (24:4-7), which they then reported to the (eleven) disciples (24:10-11). In other words, they had two pieces of evidence (empty tomb and angels’ report) that Jesus had risen from the dead (thus proving His claims as incarnate God).

The only exception might have been the second pilgrim on the way to Emmaus. However, the gender of this person is unknown and subject to speculation. (p. 427)

John 20:11-18 But Mary stood weeping outside the tomb, and as she wept she stooped to look into the tomb; [12] and she saw two angels in white, sitting where the body of Jesus had lain, one at the head and one at the feet. [13] They said to her, “Woman, why are you weeping?” She said to them, “Because they have taken away my Lord, and I do not know where they have laid him.” [14] Saying this, she turned round and saw Jesus standing, but she did not know that it was Jesus. [15] Jesus said to her, “Woman, why are you weeping? Whom do you seek?” Supposing him to be the gardener, she said to him, “Sir, if you have carried him away, tell me where you have laid him, and I will take him away.” [16] Jesus said to her, “Mary.” She turned and said to him in Hebrew, “Rab-bo’ni!” (which means Teacher). [17] Jesus said to her, “Do not hold me, for I have not yet ascended to the Father; but go to my brethren and say to them, I am ascending to my Father and your Father, to my God and your God.” [18] Mary Mag’dalene went and said to the disciples, “I have seen the Lord”; and she told them that he had said these things to her.

Again, the text never states that “only Mary” (among all women) saw Jesus, or that “Mary alone and no other woman” saw the risen Jesus. Those are the sorts of words that would be required for an actual contradiction to be present.  As it is, no contradiction has been established: not even to the slightest degree. The text simply records an instance with Mary Magdalene alone, without denying that other women saw the risen Jesus, too.

These conflicting accounts, along with those discussed throughout this text, prove that the Christian scriptures are unreliable. (p. 427)

Jesus referred to “a foolish man who built his house upon the sand; [27] and the rain fell, and the floods came, and the winds blew and beat against that house, and it fell; and great was the fall of it” (Mt 7:26-27). The “sand” here is Alter’s false premise that “conflicting [contradictory] accounts” are present in the first place. They’re not (neither here, nor throughout the innumerable alleged examples in his book); therefore, the “house” or deductive conclusion built upon them (“the Christian scriptures are unreliable”) is a falsehood. The New Testament is not only eminently reliable, accurate, and trustworthy; it is also inspired and infallible revelation.

Summary: Michael Alter tried to establish a contradiction in the NT accounts of the various women who saw the risen Jesus. But he failed basic logical tests; thus this argument of his collapses. 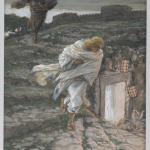