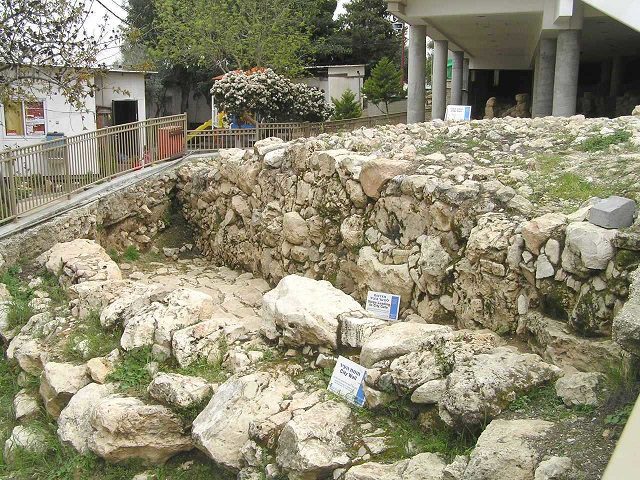 This is one of a series of articles examining if the cities and other places named in the Bible in conjunction with Abraham (c. 1813- c. 1638 BC): are able to be verified by archaeology to have existed during the time of Abraham. This was certainly true with regard to Hebron.

Genesis 35:27 And Jacob came to his father Isaac at Mamre, or Kir’iath-ar’ba (that is, Hebron), where Abraham and Isaac had sojourned.

Joshua 14:15 Now the name of Hebron formerly was Kir’iath-ar’ba; this Arba was the greatest man among the Anakim . . .

Archaeological excavations reveal traces of strong fortifications dated to the Early Bronze Age, covering some 24–30 dunams centered around Tel Rumeida. The city flourished in the 17th–18th centuries BCE before being destroyed by fire, and was resettled in the late Middle Bronze Age. This older Hebron was originally a Canaanite royal city. Abrahamic legend associates the city with the Hittites. . . .

The story of Abraham’s purchase of the Cave of the Patriarchs [burial place of Abraham, Isaac, Jacob, Sarah, Rebecca, and Leah] from the Hittites constitutes a seminal element in what was to become the Jewish attachment to the land in that it signified the first “real estate” of Israel long before the conquest under Joshua. In settling here, Abraham is described as making his first covenant, an alliance with two local Amorite clans who became his ba’alei brit or masters of the covenant.

Wikimedia’s article on the archaeological site in the city of Hebron (“Tel Rumeida”) adds:

A cuneiform economic text, with 4 personal names and a list of animals, unearthed at the site and dated 17-16 century BCE indicates Tel Rumeida/Hebron was composed of a multicultural pastoral society of Hurrians and Amorites, run by an independent administrative system with its palace scribes perhaps under kingly rule.

Hebron is also the site of the tomb of Jesse (David’s father) and Ruth. Archaeologist David Ben-Shlomo of Ariel University, in his article, “The Ancient City of Hebron” (Torah.com) describes city walls from Abraham’s time and before:

Already in the Early Bronze Age III (ca. 2600–2200 BCE), the city was fortified with a massive twenty-foot thick city wall, which was exposed by Emanuel Eisenberg underneath the even more massive Middle Bronze Age city.

Philipp Hammond was the first archaeologist to excavate Hebron, during the 1960’s. In the southern part of the tell, Hammond exposed portions of the cyclopean city wall, which he dated to the Middle Bronze Age. Avi Ofer followed during the 1980’s, and Emanuel Eisenberg in 1999 exposed another segment of the same city wall on the northern side of the tell and, using pottery and scarabs from the related floors, securely dated it to the Middle Bronze Age II (1750–1550 BCE). [see a photo of this wall in the article]

The Middle Bronze Age wall exposed on the south side is nearly 200 feet of continuous wall. Several other MB sites in the central hills were fortified by similarly sized walls, as Jerusalem-the City of David, Shechem and Shiloh. The wall stood about 15 feet high in places, nearly 12 feet thick, but was probably originally at least double in height. This massive city wall, built of huge rocks (up to six feet in size), would have been visible from afar to passersby.

See another article on further Bronze Age excavations in Hebron in 1999. A 2018 article on the city (including a video) noted the discovery that same year of stairs from the time of Abraham (recently opened to the public):

Dr. Emmanual Eisenberg of the Israel Antiquities Authority led the dig in Tel Hevron, known is Arabic as Tel Rumeida. . . . In what is today’s Admot Yishai neighborhood, near the Tomb of Jesse and Ruth is a flight of stairs, over 4,000 years old, leading from the valley below into the ancient city of Hebron.  Also discovered nearby was a 4,500 year old wall from the Early Bronze Era.

Photo credit: Large stones at the base of the Abrahamic period gate complex in Hebron [public domain / Watch Jerusalem]

Summary: Archaeology substantiates the biblical data concerning Abraham & Hebron. This (like many similar examples I have been examining) is NOT an example of a “biblical anachronism”.

July 27, 2021 Was Sodom Destroyed by a Meteor in Abraham's Time?
Recent Comments
0 | Leave a Comment
"They didn't learn apologetics, as usual, or were simply not sufficiently converted in the first ..."
Dave Armstrong Audrey Assad’s Deconversion Story: Objective Analysis
"What are we to make of people who convert to Catholicism, supposedly on fire for ..."
Chris Audrey Assad’s Deconversion Story: Objective Analysis
"You are assuming bad motives on the Cardinals in sending the Dubia. That is not ..."
Claudio Pope Francis DID Answer the Dubia ..."
"He's not obliged to do anything, if that is his decision, and you have no ..."
Dave Armstrong Pope Francis DID Answer the Dubia ..."
Browse Our Archives
get the latest updates from
Biblical Evidence for Catholicism
and the Patheos
Catholic
Channel
POPULAR AT PATHEOS Catholic
1