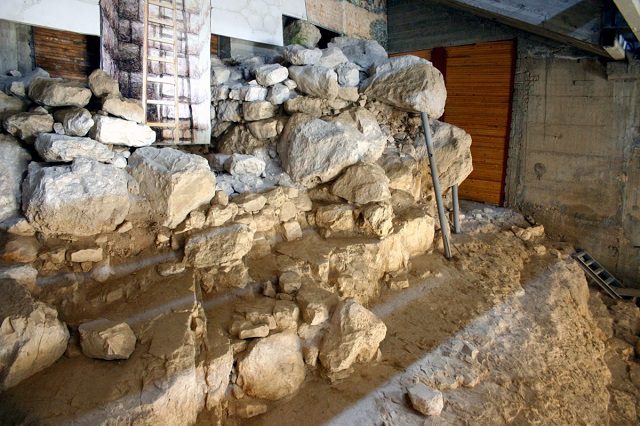 I continue my series of articles examining whether the cities and other places named in the Bible in conjunction with Abraham (c. 1813- c. 1638 BC) are able to be verified by archaeology to have existed before and during his lifetime.

Genesis 14:17-18 (RSV) After his return from the defeat of Ched-or-lao’mer and the kings who were with him, the king of Sodom went out to meet him at the Valley of Shaveh (that is, the King’s Valley). [18] And Mel-chiz’edek king of Salem brought out bread and wine; he was priest of God Most High.

Genesis 22:2, 10-12 He said, “Take your son, your only son Isaac, whom you love, and go to the land of Mori’ah, and offer him there as a burnt offering upon one of the mountains of which I shall tell you.” . . . [10] Then Abraham put forth his hand, and took the knife to slay his son. [11] But the angel of the LORD called to him from heaven, and said, “Abraham, Abraham!” And he said, “Here am I.” [12] He said, “Do not lay your hand on the lad or do anything to him; for now I know that you fear God, seeing you have not withheld your son, your only son, from me.”

These two things have to do with Jerusalem. Most scholars think Salem (one of several) was a name for ancient Jerusalem. Mt. Moriah is the spot in Jerusalem (currently the “Temple Mount”) where Solomon’s temple was built some 600-700 years after Abraham was willing to sacrifice his son there. The traditional spot is currently covered by the Islamic Dome of the Rock.

Many seem to think that Jerusalem basically began altogether, or as as a significant city at the time David became king (c. 1000 BC). This untrue. It was already very old by that time. Wikipedia (“History of Jerusalem”) provides the basic timeline:

The oldest part of the city was settled in the 4th millennium BCE, making Jerusalem one of the oldest cities in the world. . . .

Archaeological evidence suggests that the first settlement was established near Gihon Spring between 4500 and 3500 BCE. The first known mention of the city was in c. 2000 BCE in the Middle Kingdom Egyptian Execration Texts [Middle Kingdom = 2040 to 1782 BC] in which the city was recorded as Rusalimum. The root S-L-M in the name is thought to refer to either “peace” (compare with modern Salam or Shalom in modern Arabic and Hebrew) or Shalim, the god of dusk in the Canaanite religion.

Archaeological evidence suggests that by the 17th century BCE, the Canaanites had built massive walls (4 and 5 ton boulders, 26 feet high) on the eastern side of Jerusalem to protect their ancient water system.

A web page from the Jewish Virtual Library elaborates:

The Ma’arot Writings, written in hieroglyphics, were meant to put a curse on the enemies of Egypt. They were written in the 18th and 19th centuries B.C., on small statues of prisoners or on bowls. The name “Rashlemum” (Jerusalem) is mentioned on some of them. (“History of Jerusalem: From Canaanite City to Israelite Capital”)

Another web page on the History of Israel provides an excellent overview of “Ancient Jerusalem”:

Ceramic evidence has dated the ancient city into the Chalcolithic Period, ca. 3500 B.C.  . . .

An archaeological find in the north of Canaan, along the coast, produced some remarkable documents from the early 3rd millennium B.C. The discovery of Ebla (Tell-Mardikh) has shed an invaluable light on the history of this region. In its prime, ca. 2300 B.C., Ebla was an ancient city of towered, three-storied buildings. . . .

Perhaps the most astonishing discovery was a treasure trove of over 1,500 clay tablets. These tablets were written in a form of cuneiform pictographs, credited to a language that is best characterized as belonging to the same northwest Semitic tongues as Hebrew. . . .

Settlement evidence dates to the Early Bronze Age ca. 3100 B.C.-2800 B.C. www.jewishvirtuallibrary.org lists the first houses as being discovered in 2500 B.C. Kathleen Kenyon, the archaeologist famous for her work on Jericho, dates Jerusalem to 2600 B.C., and states it was founded by Northwest Semitic people. Fortifications also exist from ancient Jerusalem.

From the Middle Bronze Age comes a sizable collection of segments from fortification walls, fragments of houses and other similar structures and even flooring pieces. Foundations of a wall running down the slopes of the hill Ophel date back to 1800 B.C.

This evidence would seem to support the context for Abram’s meeting with Melchizedek as being possible. Salem/Jerusalem would have been occupied during that time, possibly fortified with massive walls. . . . evidence shows ancient Jerusalem had structures ca. 3100 B.C. – 2500 B.C. The site had likely been occupied for quite some time prior to their meeting! The historical context of the earliest Biblical account of ancient Jerusalem can be verified, . . .

The ancient wall referred to, dating to the time of Abraham, was described in a CNN article:

JERUSALEM (CNN) — An archaeological dig in Jerusalem has turned up a 3,700-year-old wall that is the largest and oldest of its kind found in the region, experts say.

Standing 8 meters (26 feet) high, the wall of huge cut stones is a marvel to archaeologists.

“To build straight walls up 8 meters … I don’t know how to do it today without mechanical equipment,” said the excavation’s director, Ronny Reich. “I don’t think that any engineer today without electrical power [could] do it.”

Archaeologist Eli Shukron of the Israel Antiquities Authority added, “You see all the big boulders — all the boulders are 4 to 5 tons.”

The discovered section is 24 meters (79 feet) long. “However, it is thought the fortification is much longer because it continues west beyond the part that was exposed,” the Israel Antiquities Authority said in a news release.

It was found inside the City of David, an archaeological excavation site outside the Old City of East Jerusalem on a slope of the Silwan Valley.

The wall is believed to have been built by the Canaanites, an ancient pagan people who the Bible says inhabited Jerusalem and other parts of the Middle East before the advent of monotheism. (‘Massive’ ancient wall uncovered in Jerusalem”, 9-7-09)

The wonderful site Holy Land Photos has pictures of items from Abraham’s time or before. “The Pool Tower” was near the Gihon Spring: the water source for Jerusalem. It’s described on its own page as follows:

In the late 1990’s, Ronny Reich and Eli Shukron were excavating the area in Jerusalem near the Gihon Spring in preparation for the construction of a visitors’ center.  Much to their surprise, they uncovered some of the remains of two towers and a portion of a large pool that had been guarded by these towers.

Links to eight photos appear on the page. There is also a web page of photos for the “Middle Bronze Channel”: a tunnel cut from the rock, designed to provide Jerusalem with water, and also dated to 1800 BC.

Israeli archaeologist Eli Shukron, who co-discovered the Pool of Siloam and the Jerusalem pilgrim road up to the temple, announced in 2019 that he had discovered within the City of David complex a pillar and altar which he connected to Melchizedek, who met Abraham. See him describe it in a video from CBN.

Some Bible scholars differ as to whether the Valley of Shaveh or King’s Valley (Gen 14:17) is the Kidron Valley, which was on the eastern side of Jerusalem and today right below the hill upon which sits the City of David / ancient Jerusalem (I walked it in 2014), leading down to the Pool of Siloam. Keil and Delitzsch Biblical Commentary on the Old Testament, commenting on Genesis 14:18, observes:

“the valley of Shaveh . . .” This valley, in which Absalom erected a monument for himself (2 Samuel 18:18), was, according to Josephus, two stadia from Jerusalem, probably by the brook Kidron . . . The name King’s dale was given to it undoubtedly with reference to the event referred to here, which points to the neighbourhood of Jerusalem.

The main opinion, . . . current from the earliest ages of interpretation, is that of the Jewish commentators, who, from Onkelos (Targum) and Josephus (War, 6, 10; Ant. 1, 10, 2; 7, 3, 2) to Kalisch (Comm. on Genesis p. 360), with one voice affirm that Salem is Jerusalem, on the ground that Jerusalem is so called in Ps 76:2, the Psalmist, after the manner of poets, or from some exigency of his poem, making use of the archaic name in preference to that in common use . . .

Summary: I show that Jerusalem is a very ancient city, which had been settled for at least 1700 years before Abraham, & had major construction projects in his time. Also, Salem = Jerusalem.

July 23, 2021
Abraham's Shechem Lines Up With Archaeology
Next Post

July 24, 2021 Abraham & Hebron: Archaeology Backs Up the Bible
Recent Comments
0 | Leave a Comment
"I wouldn't go assuming how converted someone was, as conversion is a grace. The issue ..."
Ame Audrey Assad’s Deconversion Story: Objective Analysis
"They didn't learn apologetics, as usual, or were simply not sufficiently converted in the first ..."
Dave Armstrong Audrey Assad’s Deconversion Story: Objective Analysis
"What are we to make of people who convert to Catholicism, supposedly on fire for ..."
Chris Audrey Assad’s Deconversion Story: Objective Analysis
"You are assuming bad motives on the Cardinals in sending the Dubia. That is not ..."
Claudio Pope Francis DID Answer the Dubia ..."
Browse Our Archives
get the latest updates from
Biblical Evidence for Catholicism
and the Patheos
Catholic
Channel
POPULAR AT PATHEOS Catholic
1