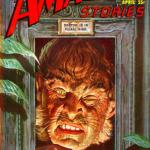 It isn’t usually relevant, but in my misspent nerdy youth, I played a good bit of Dungeons and Dragons. The great thing about the game (at least then) was that it was open ended. Whenever we played, we used rules that fit the fun we wished to have (house rules). One thing that happened in most games was much hacking and slaying of”monsters.” However, as we played longer, simply hacking and slaying grew stale, we began to demand our dungeon master (the person making up the plot of the game) do more than give us tough fights. Eventually, the very idea of monsters would change in the game.

At least where I played, “monsters” became any non-player characters. They were not always evil and if you were to hack or slay some of them, then you were unlikely to win. Some monsters became allies!

As a result, I began to view the word monster (or even monstrous) in a new way: a foreign being that is not about us and is (often huge) strange and foreign to humankind.

This worked in pop culture too! Whether it is Frankenstein’s monster or Monstro the Whale in Walt’s Pinocchio, the monster is not always evil. Monstro does what he does as a beast and simply killing him would be sad if he is the only one of his kind. Avoid getting swallowed, surely, but the best way to to do this might be to avoid his place. We are, after all, not naturally found where Monstro roams.

Judged by human standards, Monstro is a monster (bad sense). Viewed from his own niche in God’s good creation, Monstro is acting according to his nature and does actions that are harmful to us. The fault might our own. We have chosen to be where we should not be.

I thought of all of this when coming to this question by M*:

Let me assume, for the sake of this (overly) brief response that Professor Copan fails and he could not defend himself against M*’s complaints. I note that M has not said why he finds these careful arguments “utterly unconvincing” only that he does. My guess is that if M* graciously gave me detailed questions that Copan could be defended, but let me do something completely different.

Suppose God (particularly in the Old Testament) does appear a moral monster to M* and that in fact this appearance is reasonable. First, we must note that the God of the Old Testament certainly cares about morality of humankind. From the very start when Cain murdered Abel, God indicated that He was opposed to humans killing humans. God is not, however, a human. He has foreknowledge and knows how a particular act will reverberate. The ends cannot justify the means very often for us, because we are not sure of the outcome of anything we do. We follow general rules, because what else could we do?

Some acts are always bad in themselves, say adultery, and other acts are sometimes wrong.

God exists for Himself, by definition: good, true, and beautiful. We are created beings and have been given Middle Earth in which to live between Heaven and Hell. God has a rich internal life as a trinitarian being and though He loves humankind the history of the cosmos (a very big place) is not all about us. In fact, as a creation it is all about God, fundamentally.

Sadly for us, humankind frequently bumps into this great Being and he appears strange to us, because He is strange. We are created in His image, but we are not God. He is not so much beyond our judgment as so different that it is hard to make moral judgements regarding the few things we know (by His own revelation) that He has asked humankind to do.

God interacts with the cosmos, is maximizing the good, and is bound by the good, because the good is His very will. However, He acts for the maximal good in this great cosmos. Humankind is not the only sentient race, there are at least angels. Not every human civilization had the ability to even understand certain moral truths, the capacity to implement them, or the desire to do so. God works with reality and not with hypotheticals to maximize the good . . . one of which is our free will and free development as beings.  On top of that, in our foolishness, humans also break obvious limits. If a man will invade the Heavens, then that man may find that God seems monstrous. We are where we cannot be and so we find reality harsh beyond endurance.

We judge the huge, the weird (to us) and strange as “evil” too often with lesser beings. Perhaps, given our finitude we should at least give the Great God our deepest reflection lest we join a gang with torches trying to burn down His cathedrals. If we join such gangs, and the twentieth century was full of these moralistic atheists, we do nothing to God, but we do become morally wicked: monsters in the more traditional sense like the atheists Lenin, Stalin, Mao.

Maybe it is time we took at look at the Monster and judged with a divine perspective and not our own.

*M is a non-Christian that sent me 55 questions earlier this year. He has asked that I not reveal his or her name. I will write as if “he” is a male, but this is for convenience. I do not know if I will get to all his questions.  I try to limit my answers to hundreds and not thousands of words. Here are questions:

September 20, 2017
Unlocking Civ City: Amazing Bible Revelation and the Work to Be Done
Next Post

September 22, 2017 God, Angels, Bunnies, and Me
Browse Our Archives
Related posts from Eidos