“Tradition” Is Not ALWAYS a Bad Word! It’s also GOOD! 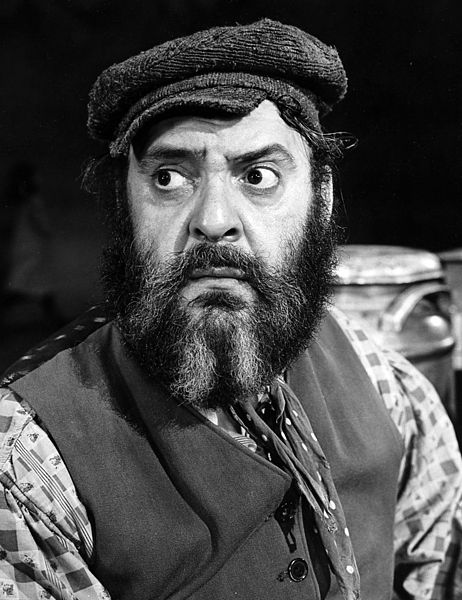 “Tradition!” Samuel Joel “Zero” Mostel (1915-1977) in 1964 as Tevye in the Broadway version of the fabulous Fiddler on the Roof. [public domain / Wikimedia Commons]

[this article is written specifically for young people and beginners in theology: maybe of middle school age or a little younger]

* * * * *
Catholic tradition is the group of teachings and beliefs that were given by our Lord Jesus to His disciples, then passed on to the great Church fathers of the early Church, and down through history to our own time.
The Catholic Church, protected by the Holy Spirit, Who is God, watches over these teachings, so that Catholics can be sure (in faith) that they are true.
Sometimes people say that the Bible and tradition are against each other (with tradition being the “bad” thing). But the Bible itself teaches that tradition was already around before the Bible was put together. In fact, the Bible itself is part of the Christian tradition, just as the Catholic Church also is.
The Bible at the same time teaches that there is also such a thing as a false “tradition of men”: things that people come up with that go against the Bible and the truths of Christianity. So there is a true and good tradition, or what is called “apostolic tradition” and also false teachings.
Some people think that no tradition has authority like the Bible does. They believe that only the Bible is infallible, or unable to fail in teaching, and they don’t believe that the Catholic Church is infallible, either. Those who believe these things think that whenever the Bible talks about tradition, it is in a bad sense, as if tradition is always “bad” or even “evil.”

Sometimes things are made more clear by picturing some sort of image for them. For Catholics, authority is like a stool with three legs. The three “legs” are Bible, Church, and tradition. These all agree with each other. The Bible teaches a lot about true, apostolic tradition. Here are some of the main passages where we see this:

1 Corinthians 11:2 (RSV) . . . maintain the traditions even as I have delivered them to you.
2 Thessalonians 2:15 . . . stand firm and hold to the traditions which you were taught by us, either by word of mouth or by letter.
2 Timothy 1:13-14 Follow the pattern of the sound words which you have heard from me, in the faith and love which are in Christ Jesus; [14] guard the truth that has been entrusted to you by the Holy Spirit who dwells within us.
2 Timothy 2:2 and what you have heard from me before many witnesses entrust to faithful men who will be able to teach others also.
Jude 3 . . . contend for the faith which was once for all delivered to the saints.
When the Bible talks about bad tradition, it reads differently. Jesus often scolded the Pharisees, a religious group of His time, for being too into laws without also teaching them in terms of love. They believed in some false traditions.
So Jesus would say things to them like, “why do you transgress the commandment of God for the sake of your tradition?” (Matthew 15:3). Here, the true tradition is called “commandment of God” and the false one is called “your tradition” (that is, against God’s tradition).
In the Gospel of Mark, Jesus gives the same thought: “You leave the commandment of God, and hold fast the tradition of men. . . . You have a fine way of rejecting the commandment of God, in order to keep your tradition! . . . thus making void the word of God through your tradition . . .” (Mark 7:8-9, 13)

St. Paul, the great apostle,writes in a similar way in Colossians 2:8: “. . . according to human tradition, . . . and not according to Christ.” The good, true tradition was the one “according to Christ.”
Paul also wrote: “If you put these instructions before the brethren, you will be a good minister of Christ Jesus, nourished on the words of the faith and of the good doctrine which you have followed. [7] Have nothing to do with godless and silly myths. . . . (1 Timothy 4:6-7)
The spoken gospel and the writings of the apostles that eventually became the Bible were part of the totally good, authentic Christian tradition.
When the first Christians went out and preached the Good News (the gospel) of Jesus Christ after Pentecost, this was a tradition of preaching, or the spoken word. Some of this preaching made it into the Bible (for example, in Acts 2) but most did not (see John 20:30; 21:25).
This is what “turned the world upside down,” not so much the words of the New Testament (most people couldn’t read in those early days of the Church, anyway).
We must conclude, then, that the word “tradition” is not always a “bad word” in the Bible. It’s a “good word” more often than it is a bad one. There is a famous saying: “don’t throw the baby out with the bathwater.” When we find some bad things about something that is mostly good, if we act sensibly, we get rid of the bad parts of it but not all of it. It would be like finding some fat on a chicken leg and throwing away the whole leg.
Tradition works the same way. Because some people distort it and start false traditions, doesn’t mean there are no good traditions. Both the Bible and the Church teach us this, and we can and should always rely on them.

In Catholicism, Scripture and tradition (along with Church authority) are bound up together, just as smaller cords can combine to make a very strong rope. They have been described by the Church as “twin fonts of the one divine well-spring” (revelation, or God’s inspired message to us), and cannot be separated, any more than two wings of a bird or two sides of a coin can be separated. 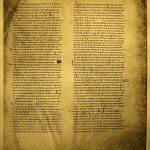 February 13, 2014 Exchanges on "Sola Scriptura" with Bible Scholar Jerome Smith
Recent Comments
0 | Leave a Comment
"Luke18:15 - Now they were bringing EVEN INFANTS to him that he might touch them; ..."
MurphsLaw What Were the Baptized “Added” to? ..."
"I have not bothered to read Bob in a while now. I kind of threw ..."
Jim Dailey Seidensticker Folly #74: Omniscient God & ..."
"Its funny that the least agreed upon document (On Media) is among the least 'controversial' ..."
Prasanth Vatican II: Documentation of Bishops’ Voting ..."
"It seems to me that Karl Keating is what you would call a 'mild critic' ..."
Prasanth Pope Francis Talks of Gospel Freedom; ..."
Browse Our Archives
get the latest updates from
Biblical Evidence for Catholicism
and the Patheos
Catholic
Channel
POPULAR AT PATHEOS Catholic
1