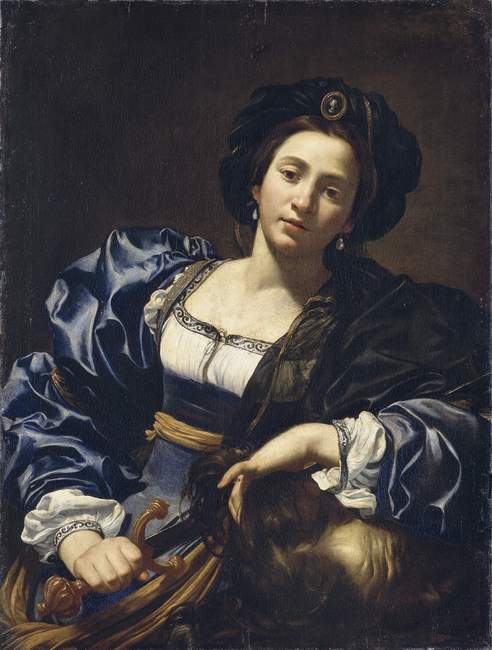 This is Appendix Three from my book, A Biblical Defense of Catholicism (1996):

The Old Testament in Catholic Bibles contains seven more books than are found in Protestant Bibles (46 and 39, respectively). Protestants call these seven books the Apocrypha and Catholics know them as the deuterocanonical books. These seven books are: Tobit, Judith, 1 and 2 Maccabees, Wisdom of Solomon, Ecclesiasticus (or, Sirach), and Baruch. Also, Catholic Bibles contain an additional six chapters (107 verses) in the book of Esther and another three in the book of Daniel (174 verses). These books and chapters were found in Bible manuscripts in Greek only, and were not part of the Hebrew Canon of the Old Testament, as determined by the Jews.

All of these were dogmatically acknowledged as Scripture at the Council of Trent in 1548 (which means that Catholics were henceforth not allowed to question their canonicity), although the tradition of their inclusion was ancient. At the same time, the Council rejected 1 and 2 Esdras and the Prayer of Manasses as part of Sacred Scripture (these are often included in collections of the “Apocrypha” as a separate unit).

The Catholic perspective on this issue is widely misunderstood (insofar as it can be said to be known at all). Protestants accuse Catholics of “adding” books to the Bible, while Catholics retort that Protestants have “booted out” part of Scripture. Catholics are able to offer very solid and reasonable arguments in defense of the scriptural status of the deuterocanonical books. These can be summarized as follows:

2) Almost all of the Church Fathers regarded the Septuagint as the standard form of the Old Testament. The deuterocanonical books were in no way differentiated from the other books in the Septuagint, and were generally regarded as canonical. St. Augustine thought the Septuagint was apostolically sanctioned and inspired, and this was the consensus in the early Church.

3) Many Church Fathers (such as St. Irenaeus, St. Cyprian, Tertullian) cite these books as Scripture without distinction. Others, mostly from the east (for example, St. Athanasius, St. Cyril of Jerusalem, St. Gregory Nazianzus) recognized some distinction but nevertheless still customarily cited the deuterocanonical books as Scripture. St. Jerome, who translated the Hebrew Bible into Latin (the Vulgate, early fifth century), was an exception to the rule (the Church has never held that individual Fathers are infallible).

4) The Church Councils at Hippo (393) and Carthage (397, 419), influenced heavily by St. Augustine, listed the deuterocanonical books as Scripture, which was simply an endorsement of what had become the general consensus of the Church in the west and most of the east. Thus, the Council of Trent merely reiterated in stronger terms what had already been decided eleven and a half centuries earlier, and which had never been seriously challenged until the onset of Protestantism.

5) Since these Councils also finalized the 66 canonical books which all Christians accept, it is quite arbitrary for Protestants to selectively delete seven books from this authoritative Canon. This is all the more curious when the complicated, controversial history of the New Testament Canon is understood.

6) Pope Innocent I concurred with and sanctioned the canonical ruling of the above Councils (Letter to Exsuperius, Bishop of Toulouse) in 405.

7) The earliest Greek manuscripts of the Old Testament, such as Codex Sinaiticus (fourth century), and Codex Alexandrinus (c.450) include all of the deuterocanonical books mixed in with the others and not separated.

8) The practice of collecting these books into a separate unit dates back no further than 1520 (in other words, it was a novel innovation of Protestantism). This is admitted by, for example, the Protestant New English Bible (Oxford University Press, 1976), in its “Introduction to the Apocrypha,” (page iii).

9) Protestantism, following Martin Luther, removed the deuterocanonical books from their Bibles due to their clear teaching of doctrines which had been recently repudiated by Protestants, such as prayers for the dead (Tobit 12:12, 2 Maccabees 12:39-45; cf. 1 Corinthians 15:29), intercession of dead saints (2 Maccabees 15:14; cf. Revelation 6:9-10), and intermediary intercession of angels (Tobit 12:12,15; cf. Revelation 5:8, 8:3-4). We know this from plain statements of Luther and other Reformers.

10) Luther was not content even to let the matter rest there, and proceeded to cast doubt on many other books of the Bible which are accepted as canonical by all Protestants. He considered Job and Jonah mere fables, and Ecclesiastes incoherent and incomplete. He wished that Esther (along with 2 Maccabees) “did not exist,” and wanted to “toss it into the Elbe” river. [Note: Luther in the latter quote was actually referring to “Esdras,” not Esther, as I later learned, and wrote about. This appendix was from research in 1996 or earlier. His views on the other books may not have been quite as bad as all that, either]

11) The New Testament fared scarcely better under Luther’s gaze. He rejected from the New Testament Canon (“chief books”) Hebrews, James (“epistle of straw”), Jude and Revelation, and placed them at the end of his translation, as a New Testament “Apocrypha.” He regarded them as non-apostolic. Of the book of Revelation he said, “Christ is not taught or known in it.” These opinions are found in Luther’s Prefaces to biblical books, in his German translation of 1522.

12) Although the New Testament does not quote any of these books directly, it does closely reflect the thought of the deuterocanonical books in many passages. For example, Revelation 1:4 and 8:3-4 appear to make reference to Tobit 12:15:

St. Paul, in 1 Corinthians 15:29, seems to have 2 Maccabees 12:44 in mind. This saying of Paul is one of the most difficult in the New Testament for Protestants to interpret, given their theology:

2 Maccabees 12:44 For if he were not expecting that those who had fallen would rise again, it would have been superfluous and foolish to pray for the dead.

This passage of St. Paul shows that it was the custom of the early Church to watch, pray and fast for the souls of the deceased. In Scripture, to be baptized is often a metaphor for affliction or (in the Catholic understanding) penance (for example, Matthew 3:11, Mark 10:38-39, Luke 3:16, 12:50). Since those in heaven have no need of prayer, and those in hell can’t benefit from it, these practices, sanctioned by St. Paul, must be directed towards those in purgatory. Otherwise, prayers and penances for the dead make no sense, and this seems to be largely what Paul is trying to bring out. The “penance interpretation” is contextually supported by the next three verses, where St. Paul speaks of Why am I in peril every hour? . . . I die every day, and so forth.

2 Maccabees 7:29 Do not fear this butcher, but prove worthy of your brothers. Accept death, so that in God’s mercy I may get you back again with your brothers. {a mother speaking to her son: see 7:25-26}

13) Ironically, in some of the same verses where the New Testament is virtually quoting the “Apocrypha,” doctrines are taught which are rejected by Protestantism, and which were a major reason why the deuterocanonical books were “demoted” by them. Therefore, it was not as easy to eliminate these disputed doctrines from the Bible as it was (and is) supposed, and Protestants still must grapple with much New Testament data which does not comport with their beliefs.

14) Despite this lowering of the status of the deuterocanonical books by Protestantism, they were still widely retained separately in Protestant Bibles for a long period of time (unlike the prevailing practice today). John Wycliffe, considered a forerunner of Protestantism, included them in his English translation. Luther himself kept them separately in his Bible, describing them generally as (although sub-scriptural) “useful and good to read.” Zwingli and the Swiss Protestants, and the Anglicans maintained them in this secondary sense also. The English Geneva Bible (1560) and Bishop’s Bible (1568) both included them as a unit. Even the Authorized, or King James Version of 1611 contained the “Apocrypha” as a matter of course. And up to the present time many Protestant Bibles continue this practice. The revision of the King James Bible (completed in 1895) included these books, as did the Revised Standard Version (1957), the New English Bible (1970), and the Goodspeed Bible (1939), among others.

15) The deuterocanonical books are read regularly in public worship in Anglicanism, and also among the Eastern Orthodox, and most Protestants and Jews fully accept their value as historical and religious documents, useful for teaching, even though they deny them full canonical status.

It is apparent, then, that the Catholic “case” for these books carries a great deal of weight, certainly at the very least equal to the Protestant view. 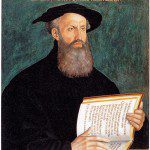 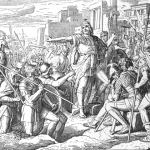 April 18, 2016 Dialogue on Objections to the "Apocrypha"
Recent Comments
0 | Leave a Comment
"That's a fair point and I will change it and add some Greek word study ..."
Dave Armstrong Pearce’s Potshots #50: Obsession w NT ..."
"Yea.. I tend to be skeptical of these kinds of "parallels" since it can be ..."
OverlappingMagisteria Pearce’s Potshots #50: Obsession w NT ..."
"Good on you for being the living counterpoint Dave. Even when being (deliberately?) misconstrued."
Scottgun Are Christians Uniquely Averse to Criticism?
"I have defended Pope Francis over 200 times:https://www.patheos.com/blo...And collected 285 more articles from others defending ..."
Dave Armstrong Bp. Schneider Evokes Luther’s Disdain for ..."
Browse Our Archives
get the latest updates from
Biblical Evidence for Catholicism
and the Patheos
Catholic
Channel
POPULAR AT PATHEOS Catholic
1