Scripture forbids us to bow down in veneration before any creature, even angels (cf. Col. 2:18; Rev. 22:8-9). The Bible makes it clear that we are not to make “idols” of any creature or even “bow down” to them in an act of religious devotion (Exod. 20:4-5). (p. 322)
*
Not only is there a total absence of veneration of any creature . . . in Scripture; there is an explicit condemnation of it! (p. 326)
*
[T]hey were bowing out of respect, not reverence. The Bible condemns even bowing before an angel to worship God (Rev. 22:8-9). More importantly, all the cases of approved bowing before another creature are not religious, but social. (p. 327)

Strong’s Hebrew Lexicon describes word #7812: shachah as “. . . prostrate (especially reflexive, in homage to royalty or God):–bow (self) down, crouch, fall down (flat), humbly beseech, do (make) obeisance, do reverence, make to stoop, worship.” [see all of the numerous OT instances of its use]
*
It’s translated in the following manner in the KJV: worship (99x), bow (31x), bow down (18x), obeisance (9x), reverence (5x), fall down (3x), themselves (2x), stoop (1x), crouch (1x), miscellaneous (3x). It mostly means bowing down to God in worship (adoration), but also not infrequently means bowing down before superiors or angels in homage or veneration. There are many biblical examples of this, directly contrary to Geisler’s claims above:

1 Chronicles 29:20 (RSV) Then David said to all the assembly, “Bless the LORD your God.” And all the assembly blessed the LORD, the God of their fathers, and bowed their heads, and worshiped [shachah] the LORD, and did obeisance [shachah] to the king.
*
Joshua 5:13-15 When Joshua was by Jericho, he lifted up his eyes and looked, and behold, a man stood before him with his drawn sword in his hand; and Joshua went to him and said to him, “Are you for us, or for our adversaries?” [14] And he said, “No; but as commander of the army of the LORD I have now come.” And Joshua fell on his face to the earth, and worshiped [shachah], and said to him, “What does my lord bid his servant?” [15] And the commander of the LORD’s army said to Joshua, “Put off your shoes from your feet; for the place where you stand is holy.” And Joshua did so.

This is not God, because he twice identified himself as the “commander of the LORD’s army.” St. Augustine, (City of God xi. 13)., St. Jerome (commentary on Galatians iii), and many interpreters hold that this impressive “man” was the archangel Michael.

Genesis 18:1-4, 22 And the LORD appeared to him [Abraham] by the oaks of Mamre, as he sat at the door of his tent in the heat of the day. [2] He lifted up his eyes and looked, and behold, three men stood in front of him. When he saw them, he ran from the tent door to meet them, and bowed [shachah] himself  to the earth, [3] and said, “My lord, if I have found favor in your sight, do not pass by your servant. [4] Let a little water be brought, and wash your feet, and rest yourselves under the tree, . . . [22] So the men turned from there, and went toward Sodom; but Abraham still stood before the LORD. (cf. Heb 13:2: “Do not neglect to show hospitality to strangers, for thereby some have entertained angels unawares.”)

This is Isaac’s blessing of Jacob.

Genesis 42:6 Now Joseph was governor over the land; he it was who sold to all the people of the land. And Joseph’s brothers came, and bowed themselves [shachah] before him with their faces to the ground.

Genesis 19:1 The two angels came to Sodom in the evening; and Lot was sitting in the gate of Sodom. When Lot saw them, he rose to meet them, and bowed [shachah] himself with his face to the earth,

Lot also clearly venerated two angels, who appear by the text (cf. 18:22 above) to be the same angels whom Abraham had talked to and venerated. They distinguish themselves from the LORD, by saying “the LORD has sent us to destroy [Sodom]” (Gen 19:3). Regarding Geisler’s contention that angels and men refused veneration, see my posts, Venerating & Bowing Before Angels & Men: Biblical? or The Bible on the Veneration of Angels & Men for in-depth analyses and refutations.

Daniel 2:46-48  Then King Nebuchadnez’zar fell upon his face, and did homage to Daniel, and commanded that an offering and incense be offered up to him.[47] The king said to Daniel, “Truly, your God is God of gods and Lord of kings, and a revealer of mysteries, for you have been able to reveal this mystery.” [48] Then the king gave Daniel high honors and many great gifts,

Daniel 8:15-17 When I, Daniel, had seen the vision, I sought to understand it; and behold, there stood before me one having the appearance of a man. [16] And I heard a man’s voice between the banks of the U’lai, and it called, “Gabriel, make this man understand the vision.” [17] So he came near where I stood; and when he came, I was frightened and fell upon my face. But he said to me, “Understand, O son of man, that the vision is for the time of the end.”

Daniel venerates an angel (seemingly Gabriel) later in the chapter, without rebuke.

Luke 24:4-5 While they were perplexed about this, behold, two men stood by them in dazzling apparel; [5] and as they were frightened and bowed their faces to the ground, the men said to them, “Why do you seek the living among the dead?”

Here, angels are bowed to in the New Testament, with no rebuke at all.

Acts 16:25-31 But about midnight Paul and Silas were praying and singing hymns to God, and the prisoners were listening to them, [26] and suddenly there was a great earthquake, so that the foundations of the prison were shaken; and immediately all the doors were opened and every one’s fetters were unfastened. [27] When the jailer woke and saw that the prison doors were open, he drew his sword and was about to kill himself, supposing that the prisoners had escaped. [28] But Paul cried with a loud voice, “Do not harm yourself, for we are all here.” [29] And he called for lights and rushed in, and trembling with fear he fell down before Paul and Silas, [30] and brought them out and said, “Men, what must I do to be saved?”  [31] And they said, “Believe in the Lord Jesus, and you will be saved, you and your household.”

Men (apostles) are venerated in the New Testament. The Greek for “fell down before” in Acts 16:29 is prospipto (Strong’s word #4363). It is also used of worship towards Jesus in five passages (Mk 3:11; 5:33; 7:25; Lk 8:28, 47). So why didn’t Paul and Silas rebuke the jailer? I submit that it was because they perceived his act as one of veneration (which is permitted) as opposed to adoration or worship, which is not permitted to be directed towards creatures. Note that the word “worship” doesn’t appear in the above five passages, nor in Luke 24:5 or Acts 16:29. When “worship”  [proskuneo] does appear in connection with a man or angel, it isn’t permitted, as in Acts 10:25-26 (St. Peter and Cornelius).

Thus, we see the same in Revelation 19:10 and 22:8-9, because St. John mistakenly thought the angel was Jesus, and so tried to worship / adore the angel. The same thing happened when men thought that Paul and Barnabas were Zeus and Hermes and “wanted to offer sacrifice.” They were rebuked, as mistaken (Acts 14:11-18).

These considerations fully refute Geisler’s arguments above about the supposed impermissibility of bowing down to and veneration of creatures. Holy Scripture only forbids worship or adoration of them. In other words, it’s completely consistent with the Catholic practice of veneration of saints and angels and utterly contrary to Geisler’s and Protestantism’s prohibition of same. 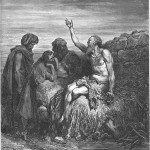 March 2, 2017 “Armstrong vs. Geisler” #9: Images & Relics
Recent Comments
0 | Leave a Comment
Browse Our Archives
get the latest from
Biblical Evidence for Catholicism
Sign up for our newsletter
POPULAR AT PATHEOS Catholic
1