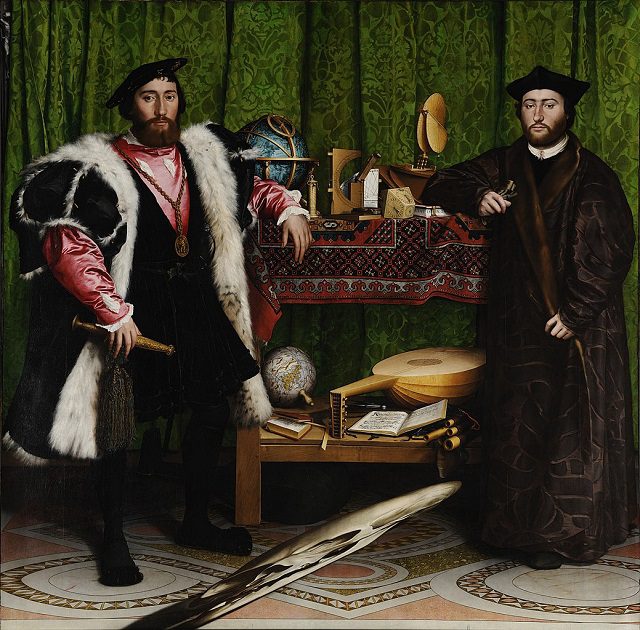 Since the middle of the 16th century religious art had come entirely to an end in all the Protestant parts of Germany . . . Nothing but sectarian narrowness could deny that German . . . art stood higher before the Reformation than after it. For nearly two centuries architecture, sculpture, and painting produced nothing more in Germany that could be compared with the creations . . . immediately before . . . the Schism in the Church. (Janssen, XI, 50-51)

Hans Holbein the younger, one of the greatest painters of all ages, was obliged to undertake house painters’ work, and to paint Coats of arms. in order to make a living . . . In consequence of being thrown out of work he saw himself compelled to migrate to England . . . ‘The art of painting,’ Albert Durer complains in a pamphlet addressed to Wilibald Pirkheimer, ‘is greatly despised among us Germans nowadays by many people, and they say it tends to produce idolatry.’ (Janssen, IV, 165)

In the northern countries, in Germany, Holland and England, artists were confronted with a much more real crisis . . . whether painting could and should continue at all. The great crisis was brought about by the Reformation. Many Protestants objected to pictures or statues of saints in churches and regarded them as a sign of Popish idolatry . . .

We can witness the effect of this crisis in the career of the greatest German painter of this generation . . . Hans Holbein the Younger (1497-1543) . . . In 1526 he left Switzerland for England . . . ‘The arts here are freezing,’ Erasmus wrote commending the painter to his friends . . . When Holbein had left the German-speaking countries painting there began to decline to a frightening extent, and when Holbein died the arts were in a similar plight in England. In fact, the only branch of painting there that survived the Reformation was that of portrait painting which Holbein had so firmly established . . .

There was only one Protestant country in Europe where art fully survived the crisis of the Reformation – that was the Netherlands . . . Artists . . . specialized in all those types of subject-matter to which the Protestant Church could raise no objections . . . [e.g., still-lifes]

The more the Protestants preached against outward show in the churches, the more eager did the Roman Church become to enlist the power of the artist. Thus the Reformation . . . also had an indirect effect on the development of Baroque. (E. H. Gombrich, The Story of Art, London: Phaidon, revised 11th edition, 1966, 274, 277, 279, 326)

Even when the Reformation was not consciously opposed to art, it shoved it aside as a distraction from the real business of life. Thus it has come about in Protestant lands that the public regards art as either a ‘business’ or an ‘education.’ (Smith, 215)

In deciding what was “pure” Calvin and his legatees made themselves silly:

Reformed churches would not permit organs . . . It filled the church with ornamental and non-Scriptural sound . . . an instrument of the elaboration and clutter which their cleansing stream of simplicity was washing away . . . In Calvinist countries, except Holland . . . they preferred to have no organs . . . There is a story of the organist of . . . Zurich weeping as he watched the axes smashing his great organ . . . All the English organs were sold or demolished again in 1644 . . . (Chadwick, 438-439)

Fortunately for the history of music, Bach was a Lutheran instead of a Calvinist!

Another Puritan, Dr. Reynolds of Oxford, was the scourge of Elizabethan theatre which . . . he wished to ban completely. The Puritans forced the theatres to move from . . . London to Southwark. If they had triumphed nationally, many of the greatest works of English literature would never have been written . . . Shakespeare, Jonson and Webster, no doubt, would have turned to other professions. (Paul Johnson, A History of the English People, New York: Harper & Row, Revised edition, 1985, 162)

The Book of Discipline in Scotland forbade attendance at theaters. Calvin thoroughly disapproved of them, and even Luther considered them ‘fool’s work’ and at times dangerous. (Smith, 44)

Luther himself was moderate in this regard:

I do not hold that the Gospel should destroy all the arts, as certain superstitious folk believe . . . The law of Moses forbade only the image of God. (Durant, 820)

On the other hand, however, Luther was most eager to trivialize and vulgarize art in commending ridiculous caricatures of Catholics as donkeys, etc.:

Wherever one goes one sees . . . caricatures of priests and monks” so that “one now experiences a feeling of disgust on seeing or hearing of a clerical person. (Janssen, XI, 56; LL, II, 674; Luther’s letter to Archbishop Albert of Mayence, June 2, 1525)

In 1526 Luther called on his disciples to:

. . . assail the . . . idolaters of the Roman Antichrist by means of painting. Cursed is he who remains idle in this matter, while he knows that he can do God a service. (Janssen, XI, 56)

This is typical of Luther’s unfortunate habit of disagreeing by means of slander, obscenity and mockery, rather than by reasonable discourse.

The early Protestant antipathy towards art was most graphically displayed in their iconoclasm with regard to “images” in churches, which they considered idolatrous:

Reformers less human than Luther, less cautious than Calvin, preferred to outlaw religious painting and sculpture altogether, and to clear their churches of all ornament; ‘truth’ banished beauty as an infidel. In England, Scotland, Switzerland, and northern Germany the destruction was wholesale and indiscriminate; in France the Huguenots melted down the . . . shrines, and other vessels found in the churches . . . The demolition was brutal and barbarous. (Durant, 821)

Amongst the preachers of the new religious opinions there were multitudes who, like Wickliffe of old, denounced all arts and sciences as devil’s traps. Zwingli and his followers designated Christian art, within the churches at any rate, as a snare of the devil . . . They assumed a hostile attitude towards Christian art in general . . . Zwingli would not even tolerate the pictures of Christ. The Helvetian confession of faith, drawn up by Bullinger, rejected images of Christ as though they were pagan idols . . . In the Basle Church Regulations of the year 1529, introduced by Oecolampadius, it is said: God has ‘cursed all those who make images.’ William Farel went so far as to denounce the making of pictures and images as a sin against nature . . . Calvin called the setting-up of pictures and images in churches a . . . ‘miserable folly which had been the destruction of all piety on earth;’ it was also iniquitous to give representations of events from sacred history. Theodore Beza directed his fury especially against pictures of the Crucifixion, which he ‘abominated.’ He wished that ‘the Christian magistracy would reduce all pictures to powder.’ (Janssen, XI, 28-29)

Martin Bucer presided over iconoclastic riots in, for example, Augsburg in 1537. (Grisar, VI, 277)

Whatever finds no mention in the Scriptures must be cast out. Crucifixes and images go, and all decorations . . . along with altars. (Hughes, 229)

The churches . . . were stripped of their ornaments, statues and pictures were destroyed, and even crosses — ‘the insignia of papal deviltry’ were condemned. (Daniel-Rops, 153; Articles on Ecclesiastical Discipline, 1536 — with William Farel)

It would be . . . ridiculous . . . to fancy that we render God more worthy service in ornamenting our temples and in employing organs and toys of that sort. While the people are thus distracted by external things the worship of God is profaned. (Smith, 215)

Even stained glass and colored walls suffered the “reformers'” wrath:

The church must be light, the walls must be white, and stained glass was believed by most Protestants to be unfitting and distracting in worship. (Chadwick, 440)

On February 21, 1548, the King’s Council would order that all images be taken out of the Churches . . . A clean sweep was made of the churches in London; the frescoes were covered over with a heavy coat of white, the walls adorned with selected texts from Scripture. (Daniel-Rops, 198)

Erasmus’ Eyewitness Account of the Rape of a Church

This iconoclastic riot took place in Oecolampadius’ Basle, Switzerland, on February 9, 1528, in which there was,

. . . a general attack on the churches, the crowd surging in to smash the images and break the stained glass. Erasmus described it graphically in a letter to his friend Pirckheimer; he must have watched sadly from the windows of his house as the mob wreaked its will on . . . inanimate objects . . . Not a statue has been left, in the churches . . . or in the monasteries; all the frescoes have been whitewashed over. Everything which would burn has been set on fire, everything else hacked into little pieces. Neither value nor artistry prevailed to save anything. (Phillips, 197)

Thus we leave our present subject, with images of crazed mobs dashing through sublimely beautiful churches, with a foaming-at-the-mouth, self-righteous fury, slashing to bits handcarved crucifixes representing our Lord’s death on our behalf, on grounds that all such works of art were idolatrous. Erasmus, fearing that “the reign of the Pharisees will be followed by that of the pagans” (Phillips, 198), left Basle on April 13th, 1528 to escape the encroaching philistinism, despite the pleas of his friend Oecolampadius. Luckily, for our sakes, the later Protestants softened their hatred of art, but many signs of a lack of appreciation for beauty, imagination, and aesthetics remain, for all who care to look. 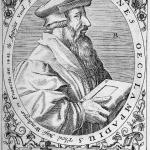 September 24, 2017
Sacramentarian Controversies (Calvin vs. Luther vs. Zwingli)
Next Post 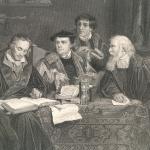