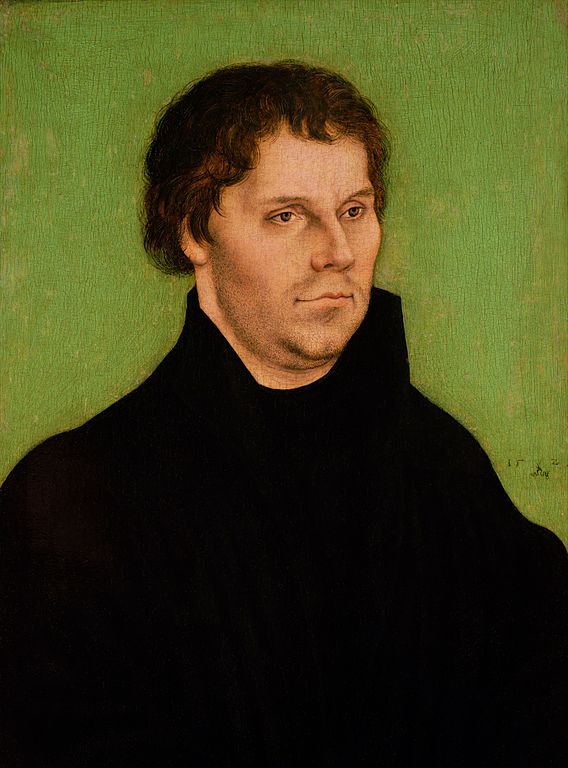 It’s inaccurate to contend that Luther despises councils altogether. Rather, he denies their infallibility and makes them formally subordinate to Scripture, which alone is infallible. This perhaps explains (at least in part) how Luther can rail against councils in one breath and espouse a quasi-Catholic principle of authority and tradition in the next.

He has been known to speak in two different senses. When he criticizes (even excoriates) councils, it is in the sense that they do not override the authoritative rule of faith of sola Scriptura, and when he thinks they are made a vehicle for unsavory and unbiblical traditions of men. When he alludes to them in a positive way, on the other hand, it is when he thinks they teach the truth according to Scripture, and over against the Zwinglian and Anabaptist sectarians, who are far more revolutionary with regard to previous Christian tradition.

“Even though saints are present in the council, even though there are many saints, and even though angels are there, still we do not trust personalities but only God’s word, since even saints can make mistakes.” [WA 39-I, 186]

When a council does not err but bears witness to the truth, we should not take it for granted . . . when a council does so, that is an empirical and “accidental” fact . . . Truth is not guaranteed by the authority of the council, but Christ’s free gift of truth in a specific instance gives a council its authority. [WA 39-I, 185]

. . . The ecclesiastical legitimacy of such a gathering does not necessarily include its spiritual legitimacy. This latter depends completely on the apostolicity of its doctrines and resolutions. [WA 39-I, 187]

Luther’s doctrine of the historical, apostolic Church and of apostolic tradition is surprisingly strong, and quite different from that of many evangelical Protestants today (though by no means identical with a fully Catholic view). Althaus summarizes:

For Luther, the Christian church is, without detriment to it spiritual nature, a historical reality, which constantly existed all through the centuries from the time of the apostles till his own time. The Evangelicals are not another and a new church but “the true old church, one body with the entire holy Christian church, and one community of saints.” [WA 51, 487] In spite of all his heartfelt criticism of the Roman Church, Luther remained certain that God had, in spite of everything, miraculously preserved the true church even in the midst of its Babylonian captivity. [WA 38, 220] . . .

Thus Luther thankfully received not only biblical substance in the direct sense of the term from the hands of the ancient and medieval church but also elements of ecclesiastical tradition . . . Luther asserts: The consensus of the entire church in a doctrine or a custom is binding insofar as it is not contrary to Scripture . . .

Luther did not, as is obvious, in any sense advocate an absolute biblicism. He did not absolutize the Bible in opposition to tradition. He limits neither Christian dogma nor the ethical implications of the gospel to what is expressly stated in Scripture. He does not demand that the truth of Christianity be reduced to biblical doctrine. (Althaus, pp. 333-335)

We must keep in mind Protestant historian Philip Schaff’s advice about Luther interpretation:

Luther’s words especially must not be weighed too nicely, else any and every thing can be proved by him, and the most irreconcilable contradictions shown in his writings. We must always judge him according to the moment in which, and that against which, he spoke, and duly remember also his bluntness and his stormy, warlike nature. (The Life and Labours of St. Augustine, Oxford University: 1854, p. 94)

. . . Luther’s otherwise evident churchly and historical feeling, and by many expressions like that in a letter to Albert of Prussia (A.D. 1532), where he declares the importance of tradition in matters of faith, as strongly even as any Catholic. (Ibid., pp. 94-95; italics mine)

Schaff, on page 95 cites Luther’s letter to Albrecht (or Albert), Margrave of Brandenburg and Duke of Prussia, dated April 1532 by some and February or early March by others (cf. another Schaff reference to the quote). The well-known Luther biographer Roland H. Bainton cites the following portion of it:

This letter, apparently passed over by Luther’s Works, Vol. 50 (Letters III), was, thankfully, cited at some length by Schaff on his page 95, and refers to, as Schaff notes, “the real presence of Christ in the Lord’s Supper”:

Moreover, this article has been unanimously believed and held from the beginning of the Christian Church to the present hour, as may be shown from the books and writings of the dear fathers, both in the Greek and Latin languages, — which testimony of the entire holy Christian Church ought to be sufficient for us, even if we had nothing more. For it is dangerous and dreadful to hear or believe anything against the unanimous testimony, faith, and doctrine of the entire holy Christian Church, as it has been held unanimously in all the world up to this year 1500. Whoever now doubts of this, he does just as much as if he believed in no Christian Church, and condemns not only the entire holy Christian Church as a damnable heresy, but Christ Himself, and all the Apostles and Prophets, who founded this article, when we say, ‘I believe in a holy Christian Church,’ to which Christ bears powerful testimony in Matt. 28.20: ‘Lo, I am with you alway, to the end of the world,’ and Paul, in 1 Tim. 3.15: ‘The Church is the pillar and ground of the truth.’  (italics are Schaff’s own; cf. abridged [?] version in Preserved Smith, The Life and Letters of Martin Luther [Boston and New York: Houghton Mifflin Company, 1911], pp. 290-292; Johann Adam Mohler, Symbolism, 1844, p. 400)

Luther combined with the boldest independence a strong reverence for the historical faith. He derives from the unbroken tradition of the church an argument against the Zwinglians for the real presence in the Eucharist . . . A Roman controversialist could not lay more stress on tradition than Luther does in this passage.

He translates one portion a little differently (my italics):

The testimony of the entire holy Christian Church (even without any other proof) should be sufficient for us to abide by this article and to listen to no sectaries against it.

Since this is referring to the issue of the Eucharist, which divided Luther and Zwingli, we may rightfully deem it relevant to the interpretation of another text having to do with the same issue, and recourse to Church authority, from five years previously. A thinker’s statements must be interpreted in light of their overall thought.

If this weren’t enough to establish Luther’s positive opinion of authoritative tradition, then perhaps Luther’s treatise Concerning Rebaptism, written against the Anabaptists in January 1528, will suffice. It was translated by Conrad Bergendoff and published in Luther’s Works, Vol. 40, pp. 229-262, from the original German in WA (Weimar Werke), Vol. 26:144-174:

[p. 231] …Christ himself came upon the errors of scribes and Pharisees among the Jewish people, but he did not on that account reject everything they had and thought (Matt. 23[:3]). We on our part confess that there is much that is Christian and good under the papacy; indeed everything that is Christian and good is to be found there and has come to us from this source. For instance we confess that in the papal church there are the true holy Scriptures, true baptism, the true sacrament of the altar, the true keys to the forgiveness of sins, the true office of the ministry, the true catechism in the form of the Lord’s Prayer, [p. 232] the Ten Commandments, and the articles of the creed … I contend that in the papacy there is true Christianity, even the right kind of Christianity and many great and devoted saints. . . .
Listen to what St. Paul says to the Thessalonians [II Thess. 2:4]: “The Antichrist takes his seat in the temple of God.” If now the pope is (and I cannot believe otherwise) the veritable Antichrist, he will not sit or reign in the devil’s stall, but in the temple of God. No, he will not sit where there are only devils and unbelievers, or where no Christ or Christendom exist. For he is an Antichrist and must thus be among Christians. And since he is to sit and reign there it is necessary that there be Christians under him. God’s temple is not the description for a pile of stones, but for the holy Christendom (I Cor. 3[:17]), in which he is to reign. The Christendom that now is under the papacy is truly the body of Christ and a member of it. If it is his body, then it has the true spirit, gospel, faith, baptism, sacrament, keys, the office of the ministry, prayer, holy Scripture, and everything that pertains to Christendom. So we are all still under the papacy and therefrom have received our Christian treasures.
*
. . . We do not rave as do the rebellious spirits, so as to reject everything that is found in the papal church. For then we would east out even Christendom from the temple of God, and all that it contained of Christ. But when we oppose and reject the pope it is because he does not keep to these treasures of Christendom which he has inherited from the apostles. Instead he makes additions of the devil and does not use these treasures for the improvement of the temple. Rather he works [p. 233] toward its destruction, in setting his commandments and ordinances above the ordinance of Christ. But Christ preserves his Christendom even in the midst of such destruction, just as he rescued Lot at Sodom, as St. Peter recounts (I Pet. 2 [II Pet. 2:6]). In fact both remain, the Antichrist sits in the temple of God through the action of the devil, while the temple still is and remains the temple of God through the power of Christ . . .
*
. . . They take a severe stand against the pope, but they miss their mark and murder the more terribly the Christendom under the pope. For if they would permit baptism and the sacrament of the altar to stand as they are, Christians under the pope might yet escape with their souls and be saved, as has been the case hitherto. But now when the sacraments are taken from them, they will most likely be lost, since even Christ himself is thereby taken away.

Luther did argue (in very strong terms) that Church tradition alone and unanimous adherence through history was sufficient to do resolve this controversy, as we just observed in Schaff’s rendering of Luther’s words from 1532: “The testimony of the entire holy Christian Church (even without any other proof) should be sufficient for us to abide by this article and to listen to no sectaries against it.” 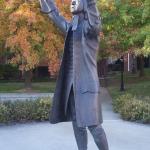 October 25, 2017
Condemnation of the Anti-Protestant Spirit (A Sad Dialogue)
Next Post 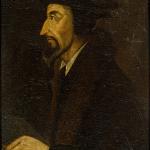