U2: We Choose Legal Abortion Over Christianity

U2: We Choose Legal Abortion Over Christianity May 4, 2018 Dave Armstrong

John Lennon (1966): “The Beatles are more popular than Jesus” [which was indeed sadly true for many millions of people: especially in relatively more secularized England]

U2 (2018) [in effect]: “killing preborn children and being politically chic and popular [i.e., politically far left, of course] trumps the Christian prohibition of murder, and the sanctity of life from the womb to the tomb.”

U2 posted an image of the repeal logo on Twitter accompanied by the written message, “Vote on May 25th” — the date of Ireland’s referendum on its Eighth Amendment, which has protected the lives of mothers and their unborn babies since 1983.

Guitarist The Edge (Dave Evans) told a reporter for the Irish Mirror (article of 5-3-18):

It is huge and I know there is a huge divergence of opinion on it and I accept that and it is hard to take a stance without having to acknowledge there is another side to it but I am for it and I support repeal. It is the smart thing to do.

This proves once again where ultimate allegiances lie. Political conservatives are often wrongly charged with putting their political allegiances above the teachings of the Catholic Church (it is a warranted charge in some — far too many — cases). In fact, what I see much more often is political liberals placing a higher priority or allegiance on the tenets of radical secular liberalism (where they clash with Christianity) than the tenets of Christianity.

They do not submit the former to the latter. If it comes to an ultimate choice, U2 (as an example of same) espouses the killing of preborn children rather than clear, firm Christian teachings against it. They did the same with so-called “gay marriage”, sending out a note on Instagram: “In the name of Love . . . #vote YES.”

Nor is this anything new. A 1989 article in Mother Jones about Bono cites him as follows:

I believe that it’s a woman’s right to choose. Absolutely. . . .

My bottom line on any sexuality is that love is the most important thing. That love is it. Any way people want to love each other is OK by me. That’s different from abuse, be it homosexual or heterosexual.

U2 takes these positions because that is their ultimate allegiance: when push comes to shove, they are against God and Christianity rather than for them. Their god has become radically secular anti-traditional sexual morality rather than God and traditional, biblical, pro-life, pro-family, pro-procreation morality.

That’s what U2 has done. John Lennon, on the other hand, wasn’t actually doing that at all. The Beatles were not “anti-God” or even anti-Church of England. He was simply making a pointed sociological observation about hypocrisy and misplaced priorities. He and his wife Yoko Ono actually spoke out in 1971 against the myth of overpopulation and the notion that we should have less children because of it (see the video), and Lennon expressed a significant interest in evangelical Christianity in the 1970s. I remember reading about how he said he was reading the Gospels and appreciating them shortly before he was murdered.

Bono in particular clearly prides himself for being such a “radical” Christian. My foot! Being a radical Christian is willing to be hated by the world (just as Jesus said we would be) for taking stands that the world-system (biblical kosmos) despises: that are not fashionable; to speak truth to power and fashion.

Pro-life and traditional marriage are the two things today where the “acid test” reside. Will we choose the popularity of being in sync with the world’s secular values and being chic and “cool” and all that, or do we speak out against sin, including against the wanton, merciless slaughtering of human beings, no matter what it costs us?

We can hardly call U2 a “Christian band” (if we ever could). This is a very sad thing for me to see, as they have been my favorite currently active band since 1987 (The Beatles being my all-time favorite band). Three of them have always claimed to be seriously committed Christians, as far as I know. Childkilling advocacy and calling same-sex sexual activity “marriage” is simply not consistent with Christianity.

Will I still listen to them? Yes, I’m sure I will; just as I have listened to the music of anti-Semite and sexual miscreant Richard Wagner (my favorite classical composer) for almost fifty years. Artists of all stripes strongly tend not to be saints. But the art can be judged good or bad on its own, independently of the character of those who produce it.

I will say, though, that I can never enjoy the music of U2 as much as I have, these past 38 years; just as millions now cannot watch and enjoy the Cosby Show, as they once did. 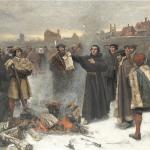 May 2, 2018
Analyzing Luther / Protestant Traditions of Men Inevitable
Next Post 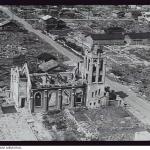 May 4, 2018 Ethics of Hiroshima & Nagasaki: Catholic Reflections
Recent Comments
0 | Leave a Comment
"I don't know what yer bitching about? People Quote Pope Francis all the time and ..."
Jim the Scott Pope Francis the “Heterodox Liberal” (?????)
"I am encouraged that even some of the atheists over there appeared to question the ..."
Jim Dailey Pearce’s Potshots #49: Homer & the ..."
"Just so you know Jimmy Bean, you’re WRONG. And your OP contradicts itself. Lastly, wether ..."
🗣 The Voice of Reason 👑 Pope Francis the “Heterodox Liberal” (?????)
"Good questions as always.I don't see that this would necessarily be mentioned in other sources. ..."
Dave Armstrong Noah’s Flood: Not Anthropologically Universal + ..."
Browse Our Archives
get the latest updates from
Biblical Evidence for Catholicism
and the Patheos
Catholic
Channel
POPULAR AT PATHEOS Catholic
1