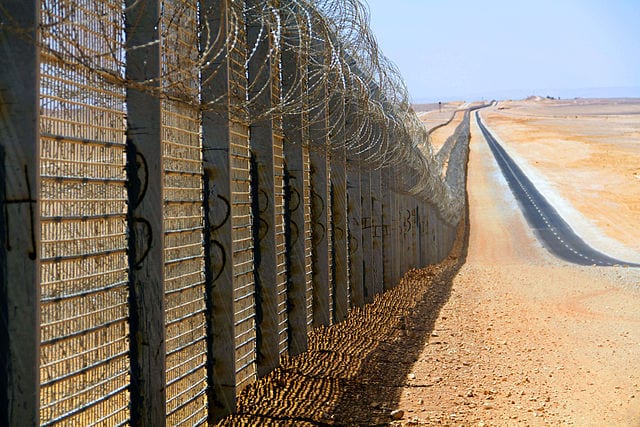 The compassionate humanitarian (and Catholic) argument for border enforcement, including a wall if necessary, is not at all based on some imagined hostility to Mexicans and people from Central America. It is out of deep concern for them, too. For example, According to a 2016 United Nations article:

Criminal groups in Mexico kidnap more than 20,000 migrants each year. The Comisión Nacional de los Derechos Humanos (Mexican National Human Rights Commission (CNDH)) reported that in six months, between 2008 to 2009, nearly 10,000 migrants were kidnapped, and in the first six months of 2011, 11,333 migrants were kidnapped. Once captured by criminal groups, the families of the migrants are contacted for ransom money. Migrants whose families are unable to pay may be killed. Meanwhile, the migrants may face torture and abuse.

In addition to the risks of extortion, kidnapping, and violence that migrants face, migrant women are also vulnerable to sexual and gender-based violence, including rape and sexual assault. Women experience sexual violence and forced disappearances often near the border. According to Amnesty International, 60% of migrant women and girls are raped while migrating, while other data indicate that 80% of women experience rape and sexual assault during the migration process.

Concern over illegal immigration includes significant crime committed by illegals once they get to America as well.  An article from the Texas Department of Public Safety provides the grim statistics about crime and illegal immigrants for just this one state:

Multiple thousands are dying from heroin and other drugs that overwhelmingly come through the southern border. Drug deaths are increasing at an alarming rate: and most of those drugs come from the south of the border, as documented in an August 2018 article from the National Institute on Drug Abuse. It noted in summary, among its many dire statistics:

The highest rise was seen for deaths involving other synthetic opioids, with a 22-fold increase from 2002 to 2017. The final two charts show the numbers of cocaine and benzodiazepine deaths that also involved an opioid; overdoses on these drug combinations have increased by nearly 3- and 6- fold respectively.

Since 2009, heroin seizures at the southwestern border have almost tripled, while meth seizures quintupled through 2014. . . .

Increased drug trafficking in the U.S. has led to an epidemic level of overdoses, surpassing car accidents and firearms as the leading cause of injury and death among Americans.

According to data from the DEA, the number of drug overdoses has climbed more than 50% in the last decade.

Border walls work. They stop or greatly reduce illegal immigration and illegal drugs. No one need merely take my word for it. Anyone can check out the documented facts about El Paso, Texas. In 2006, just before a wall was built there, illegal crossings numbered 122,261. In 2017, the figure was 25,193. The article I cite noted that “El Paso since then has consistently topped rankings for cities of 500,000 residents or more with low crime rates, based on FBI-collected statistics.”

Over the past 24 years, including a decade living in Mexico City, I have made dozens of trips to Tijuana and watched the city slowly mature from a kind of wild west dependence on migrant-smuggling and American tourism to a more self-contained and economically viable metropolis: a place with burgeoning opera and classical music scenes and a distinctive and high-quality cuisine known as Baja Med. . . .  Bus depots that once deposited tourists or prospective migrants near the border daily have closed. The old hooker hotels are fading, and lofts and artist spaces have sprouted up. Today, Tijuana’s economy is among the most robust in Mexico.

I’m all for legal immigration and helping those who are in terrible situations attain a better life. I’ve been writing about immigration issues since at least 2010. In a blog post about refugees, from November 2015, I stated my position (which has not changed at all):

Bring the refugees in by the multiple thousands (I put up a paper on my blog five years ago about immigrants — even illegal ones — citing Church statements on compassionate treatment), but they must be vetted, just as immigrants have always been. . . .

This is not an either/or situation. It’s not “totally uncontrolled [including illegal] immigration” vs “evil nativist conservative bigots and fear-mongers” who oppose all immigration, legal or illegal.

That is not the case. There is a sensible middle here on the refugee crisis, that is quite consistent with Catholic teaching and traditional (and singular) American compassion and willingness to take in the “huddled masses”, . . .

Many thousands of people need to simply talk to those who differ from them politically. This will allow agreement to take place, more mutual respect, and less demonization, leading in turn to principled compromises and political action to solve human problems. If someone disagrees with what I have written here, then please make a friendly rational argument and tell me why.

January 28, 2019 Sacraments: Bible & Church Fathers (vs. Calvin #34)
Recent Comments
0 | Leave a Comment
"Just to clarify a theme in this post which is a little off. Fr. Brown ..."
Jack Conklin Fr. Raymond Brown: Modernist Dissident?
"So do many modern songs that rely real historical events but use non-literal figures."Bye Bye ..."
Jim the Scott Debate: Historical Local Flood & Biblical ..."
"Correct of course Einstein taught us motion is relative to the view point of the ..."
Jim the Scott Debate: Historical Local Flood & Biblical ..."
"Great news."
Tom Hanson Archaeology & a Proto-Hebrew Language in ..."
Browse Our Archives
Related posts from Biblical Evidence for Catholicism