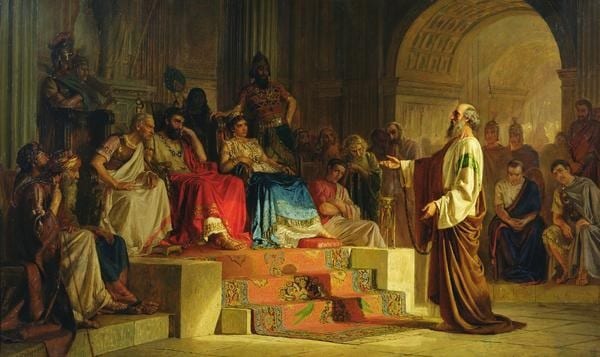 Thus far, I have counter-replied to 33 of Dr. Madison’s critiques, without hearing one peep back from him as of yet (29 days’ total time, starting on 8-1-19). This certainly doesn’t suggest to me that he is very confident in his opinions. I know he’s still alive and kicking, because I’ve seen him write other posts during this same period (example one / two / three).

Dr. Madison calls his critique of Romans chapter 9, “How Did the Great Christian Swindle Begin?: It followed an old script…and added its own spin” (8-4-17).

Paul hits some familiar sour notes. Nothing can be allowed to minimize God—especially not anything a person could do; God calls all the shots, vv. 16-18:

Say what? God gets the credit for making people hard-hearted? Kinda puts at least one hole in the free will argument. This reminds us of Paul’s bludgeon theology found in Romans 1; three times there he says that God “gave people up” to their lusts, degraded passions and debased minds (vv. 24, 26 & 28). Also check out his chilling list of people “who deserve to die” in vv. 29-31.

I’ve dealt with this “hardening” motif many times. It’s far more complex than Dr. Madison makes out. In a nutshell, it means (all relevant passages examined together) that people choose in their free will to rebel against God and to sin, and God allows it. It’s one of innumerable examples of biblical non-literal expression:

Reply to a Calvinist: Hardening of Pharaoh’s Heart

Paul anticipates that people might object to this view of God, but he offers a typical putdown, v. 20: “But who indeed are you, a human being, to argue with God? Will what is molded say to the one who molds it, ‘Why have you made me like this?’” Moreover, he is convinced that God has made some people for destruction as a way to show off his wrath, v. 22: “What if God, desiring to show his wrath and to make known his power, has endured with much patience the objects of wrath that are made for destruction.”

But wait, it gets worse, v. 23: “…and what if he has done so in order to make known the riches of his glory for the objects of mercy, which he has prepared beforehand for glory—“ God shows wrath is order to make a nice contrast with his mercy! Then Paul boasts that he and his followers are “the objects of mercy,” part of the in-crowd, v. 24: “ …including us whom he has called, not from the Jews only but also from the Gentiles?” And he quotes Hosea to drive home the point that his crowd “shall be called the children of the living God.”

It’s a difficult chapter to understand, and Calvinists have famously and wrongly used it to bolster their false theology of double predestination, but there is a perfectly acceptable and plausible non-Calvinist interpretation of it, as I have written about: Romans 9: Plausible Non-Calvinist Interpretation. Here’s an excerpt, from Marvin Wilson’s Our Father Abraham:

[C]oncepts were expressed in self-contained units or blocks of thought. These blocks did not necessarily fit together in any obviously rational or harmonious pattern, particularly when one block represented the human perspective on truth and the other represented the divine. This way of thinking created a propensity for paradox, antimony, or apparent contradiction, as one block stood in tension — and often illogical relation — to the other. Hence, polarity of thought or dialectic often characterized block logic.” Examples of this in practice are the alternate hardening of Pharaoh’s heart by God, or by Pharaoh himself; and the reference to loving Jacob while hating Esau — both of which, significantly, are referred to often by Calvinist writers.

Consideration of certain forms of block logic may give one the impression that divine sovereignty and human responsibility were incompatible. The Hebrews, however, sense no violation of their freedom as they accomplish God’s purposes.” The back and forth between human freedom and divine sovereignty is a function of block logic and the Hebrew mindset. Writers like Palmer who proudly declare that they believe what they read in spite of what they see as an apparent absurdity are ultimately viewing the Scriptures, wrongly, through their own Western lens in which they assume that all that they read is all that there is.

Most of the rest of this critique is repetition of Dr. Madison’s tired, oh-so-familiar-by-now themes that I have already dealt with, so I’ll pass. 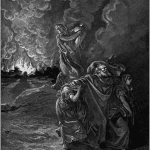 August 29, 2019
Did Jesus Believe That Homosexual Acts Were Immoral?
Next Post

August 30, 2019 David Madison vs. Paul and Romans #10: Chapter 10
Recent Comments
0 | Leave a Comment
Browse Our Archives
get the latest updates from
Biblical Evidence for Catholicism
and the Patheos
Catholic
Channel
POPULAR AT PATHEOS Catholic
1