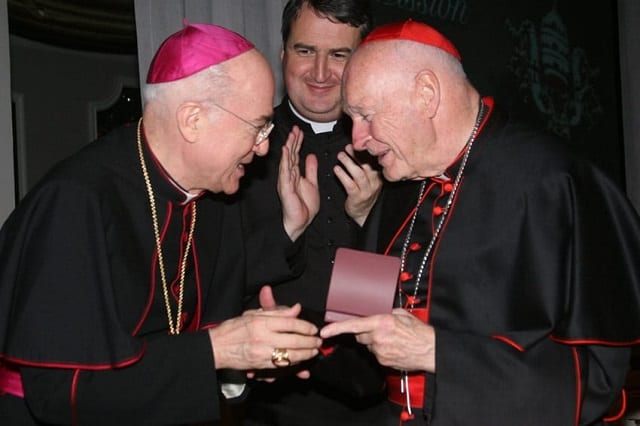 [Letter to Inside the Vatican: February 11, 2020; published here with the express permission of Dr. Robert Fastiggi]

I was happy to see Archbishop Carlo Maria Viganò refer to Mary as the “Coredemptrix and Mediatrix of all graces” in his December 19, 2019 letter published in your January 2020 issue.  I was also pleased to see an excerpt of an article by Dr. Mark Miravalle from the National Catholic Register, which emphasizes “the central truth of Mary being the spiritual Mother of the Church and of all peoples.” In contrast to Archbishop Viganò, however, neither Dr. Miravalle nor I believe Pope Francis’ 2019 homily for the Feast of Our Lady of Guadalupe was an expression of an “evident Marian intolerance.” We explain this in an article we co-authored [link] entitled “Pope Francis and the coredemptive role of Mary, the ‘Woman of salvation’” that appeared in the English and Italian editions of La Stampa’s Vatican Insider (January 8, 2020).  In this article we show that Pope Francis has a profound awareness of Mary’s central role in the work of redemption. In fact, in his January 1, 2020 homily for the Solemnity of Mary, Mother of God, the Holy Father says, “From her, a woman, salvation came forth and thus there is no salvation without a woman.”  He also refers to Mary as “the woman of salvation” (Donna della salvezza).

I certainly respect Archbishop Viganò’s episcopal dignity and his many years of service to the Church. His most recent statements, though, come across as hyperbolic, intemperate, and in many cases inaccurate. For example, he claims Pope Francis “deserts the solemn celebration of the Assumption and the recitation of the Rosary with the faithful.” This, though, is not true. The Holy Father faithfully observes the Solemnity of the Assumption, and on August 15, 2014 he celebrated Mass for the Assumption in a large stadium in Korea. Pope Francis also has led multiple public recitations of the Rosary. On August 25, 2016, he led 11,000 pilgrims gathered in St. Peter’s Square in the recitation of the sorrowful mysteries for the victims of the earthquakes in Italy the day before. Archbishop Viganò also accuses Pope Francis of making a “declaration of war” on Our Lady of Guadalupe by enthroning the “Amazonian idol” of the pachamama in St. Peter’s Basilica. He seems unaware that St. John Paul II—in a homily given in Cochabamba, Bolivia on May 11, 1988 [link] —referred to pachamama as the ancestral name given to the earth, which produces food as a reflection of divine providence and the work of God.

Archbishop Viganò believes that Pope Francis is guilty of “material heresies, formal heresies, idolatry,” and “a false magisterium.” The Archbishop also says the reference to the ‘dew” in Eucharistic Prayer II is “a further step in the direction of regression towards the naturalization and immanentization of Catholic worship, towards a pantheistic and idolatrous Novissimus Ordo”— a sign of “a new globalist and eco-tribal paganism with its demons and perversions.” The ‘dew,” though, is found in the Latin of Eucharistic Prayer II, which reads: “Hæc ergo dona, quæsumus, Spíritus tui rore sanctífica, ut nobis Corpus et  Sanguis fiant Dómini nostri Iesu Christi.” “Rore” is from “ros, roris,” the Latin word for dew. The change made in the Italian translation from “sanctifica con l’effusione del tuo Spirito” [sanctify with the effusion of thy Spirit] to “santifica questi doni con la rugiada del tuo Spirito”[sanctify these gifts with the dew of thy Spirit] is hardly a regression to pantheism and idolatry. It is merely a change that seeks to   reflect better the original Latin of Eucharistic Prayer II.

Archbishop Viganò is to be admired for his deep Marian devotion. The tone and rhetoric of his recent statements are, I believe, a cause for concern. Let’s keep the Archbishop in our prayers.

Pope Francis vs. the Marian Title “Co-Redemptrix”? (+ Documentation of Pope Francis’ and Other Popes’ Use of the Mariological Title of Veneration: “Mother of All”) [12-16-19]

Pope Francis and Mary Co-Redemptrix (Robert Fastiggi, Where Peter Is, 12-27-19)

February 21, 2020
Bible on Authority to Anathematize & Excommunicate
Next Post

February 22, 2020 Dialogue: Paul, Bible, & Catholicism R Anti-Sex? (Pt. 2)
Recent Comments
0 | Leave a Comment
"You have written well about Erasmus. But, I don't think that is the view that ..."
Prasanth Erasmus-Luther Correspondence: 1517 to 1534
"Thanks for letting me know. I will stop following them from now on."
Prasanth Did Moses Exist? No Absolute Proof, ..."
"Sorry, I just wanted you to react with that. Never expected it to be such ..."
Prasanth Did Moses Exist? No Absolute Proof, ..."
"We didn't but Gnu Atheists need their argumentum ad hominem. Cheers brother."
Jim the Scott Did Moses Exist? No Absolute Proof, ..."
Browse Our Archives
get the latest from
Biblical Evidence for Catholicism
Sign up for our newsletter
POPULAR AT PATHEOS Catholic
1