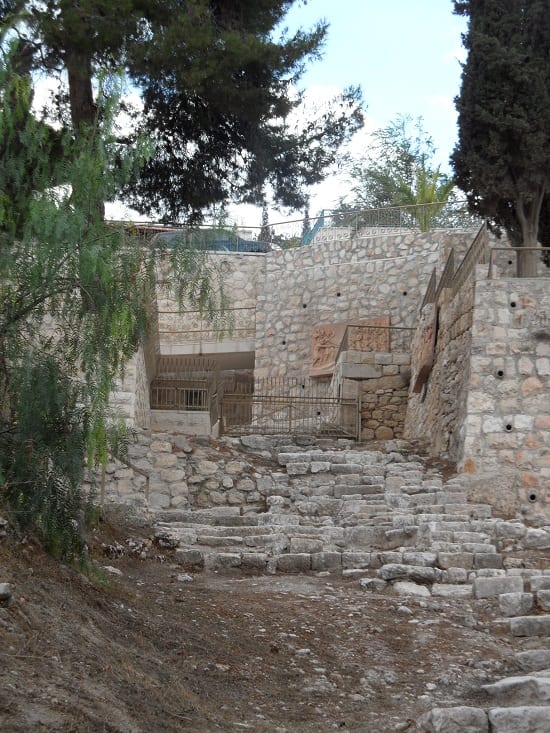 [“pre-trip” / archaeological portion of a chapter from my book, Footsteps that Echo Forever: My Holy Land Pilgrimage; available for as low as $2.99 in e-book format]

*
Moreover, he noted that the present Via Dolorosa probably starts at a different place than the beginning of the actual route that Jesus took to the place of His crucifixion. Fr. Pixner provides further details:

Once again, it is striking how recent these findings are. If legitimate (there are always other scholars who disagree), they are quite significant regarding the details of Christ’s Passion.

8 “Shimon Gibson: Final Days of Jesus out in paperback,” TaborBlog, 28 March 2010. The article contains a photograph of the proposed site of the “pavement” and courtyard where Pilate judged Jesus, and an artist’s conception of what it may have looked like.

10 Peabody, Massachusetts: Hendrickson Publishers. A very helpful diagram showing the locations of the two competing theories of the Praetorium and Via Dolorosa, appears on p. 101: accessible on the Google Books page for this book. A reproduction of Herod’s Palace is found on p. 111, and a photograph of the area today, on p. 105.

***
*
Practical Matters: Perhaps some of my 3,900+ free online articles (the most comprehensive “one-stop” Catholic apologetics site) or fifty books have helped you (by God’s grace) to decide to become Catholic or to return to the Church, or better understand some doctrines and why we believe them.
*
Or you may believe my work is worthy to support for the purpose of apologetics and evangelism in general. If so, please seriously consider a much-needed financial contribution. I’m always in need of more funds: especially monthly support. “The laborer is worthy of his wages” (1 Tim 5:18, NKJV). 1 December 2021 was my 20th anniversary as a full-time Catholic apologist, and February 2022 marked the 25th anniversary of my blog.
*
PayPal donations are the easiest: just send to my email address: apologistdave@gmail.com. You’ll see the term “Catholic Used Book Service”, which is my old side-business. To learn about the different methods of contributing, including 100% tax deduction, etc., see my page: About Catholic Apologist Dave Armstrong / Donation Information. Thanks a million from the bottom of my heart!
*
*** 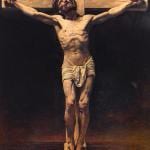 April 10, 2020 Visiting Golgotha: A Sublimely Moving Spiritual Experience
Recent Comments
0 | Leave a Comment
"I also remember suffering from horrible acid reflux about 20 years ago. Right as I ..."
Chris Flanigan Antacids & Excessive Calcium Make Ulcers ..."
"If your interlocutors do not believe in denominationalism, how do they see the teaching of ..."
Paul Hoffer Has Lutheranism Avoided Denominationalism?
"50% of the population have H Pylori, yet only few get ulcers. One study found ..."
Chris Flanigan Antacids & Excessive Calcium Make Ulcers ..."
"Well, if it has been going on for a while (like a couple of weeks) ..."
Jim Dailey Antacids & Excessive Calcium Make Ulcers ..."
Browse Our Archives
Related posts from Biblical Evidence for Catholicism