Why is Pope Francis So Loved by Theological Liberals?

Why is Pope Francis So Loved by Theological Liberals? April 8, 2020 Dave Armstrong 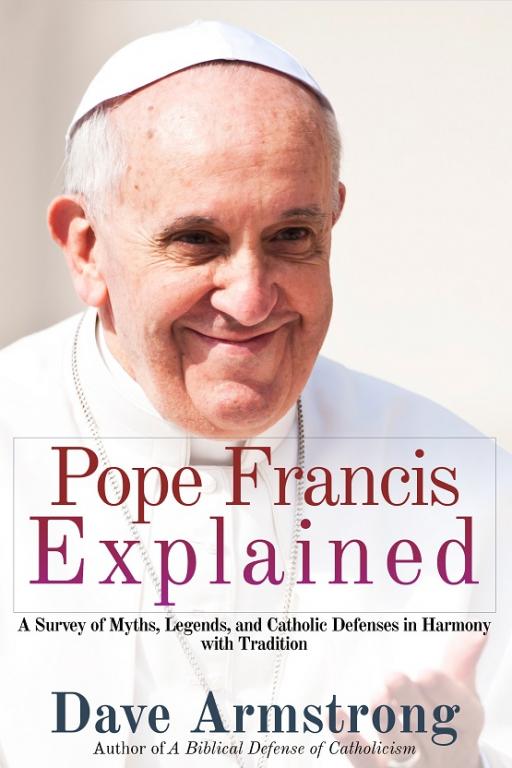 It’s because they are desperate for [one they wrongly believe to be] “one of them” to subvert and control the despised Catholic Church. They played this game with Pope St. John XXIII (who to this day is pretended to be a liberal) and (initially) Pope St. John Paul the Great also. Extreme wishful thinking and a twisting of the facts into their own agendas. . .

I have pointed out that my “hero” St. John Henry Cardinal Newman is also regularly lied about as supposedly being a liberal, 125 years after his death. The rumor was as ridiculous when he was alive as it is now, and was shot down by none other than Pope St. Pius X.

Even Dave Armstrong admitted a few weeks ago that he would be in a crisis come October if things turn out in a bad way. I was surprised to see him say it (to even entertain the thought),

Yes “even” Dave Armstrong did, and the fact that this surprises Charmaine so much is yet another evidence that she has little clue as to what I am about. The difference between me and many others is that I wait to see what actually happens at these synods, rather than spread mud and dirty laundry and rumors and hysterics all over the place for the world to see.

I believe in faith that the Church will not change her moral teachings, because she never has up till now. That was a major reason why I became a Catholic in 1990: her unique traditional moral teachings.

That’s why I said that if the unthinkable actually happened, I would be in crisis and would have to seriously rethink things. I don’t expect it to happen at all and am not worried about it day and night like so many of you because I trust that God knows what He is doing and is guiding His Church as always.

I wrote about this question over a year ago in the Introduction to my book, Pope Francis Explained:

It seems that everyone wants to make the pope (like they often do with God Himself) into their own image. Those outside the Church do this in proportion to how “contra-Catholic” or secular they are: up to and including atheists; as well as dissenting modernists and theological liberals within the Church (the “cafeteria” / pick and choose types).

These all want him to be so-called “progressive” and are more than willing to project this attribute onto him, in a huge campaign of wishful thinking, if in fact it is not there. This group includes (very much so) the media.

They long and yearn and (except for the atheists) pray for the day when a truly “enlightened” pope will come around to bring the Church out of the “Dark Ages” into our marvelously happy and fulfilled modern world: one who will fundamentally change things. This latter expectation, in turn, reveals their own fundamental ignorance about the role of the papacy and the scope of his power, as one who preserves tradition and dogma.

On the other end of the scale, the radical Catholic reactionaries, on the extreme right on the Catholic ecclesiological spectrum and a hair’s breadth away from schism, exaggerate new popes’ differences (if any) from previous popes, and become needlessly alarmed that the Church is revising or transforming itself; going to pot because of the new “liberal” pope.

Or, conversely, if they actually like the new pope (as they did, Pope Benedict XVI; as did also, mainstream “traditionalists”), they do the same, but in an approving, rather than disapproving sense.

Thus, we have a scenario whereby folks on both the “left” and the “right” of the theological spectrum massively misinterpret what a new pope says and does. I aim to show both factions the errors and illusions of their ways.

People complain about Pope Francis in numerous ways. Me, I like variety. It’s the spice of life. Pope St. John Paul II was the Philosopher, Benedict VXI, the Theologian, and Francis, the Pastor. I love all three things and all three brilliant men.

I always say that the average pastor of an evangelical church (like the ones I used to attend) has far more day-to-day influence than popes do in Catholics’ lives (in a practical sense). So if this pope stumbles someone, they should ignore him and wait till the next one. What they should not do is spread their doubts and concerns all over Facebook. There is no need for that. If they must talk about it, I urge (and beg!) them to do it privately.

The anti-Catholics are already having a field day mocking and laughing at us because of all the ridiculous in-fighting about the pope. If I were still evangelical today, viewing all this stuff, I would have utterly despised it and would have said something like, “Good grief! Catholics running down the pope day and night? Don’t they understand how their own ecclesiology and protocol work?”

I would have regarded it as the most absurd thing in the world. I had far more respect for popes as an evangelical than 90% of the [Catholic] people do, whom I observe running him down constantly. But my conversion was never based on how people behaved. I saw far more personal commitment to discipleship in evangelicalism than in Catholicism.

That wasn’t the basis (and never should be). I’m here because I believe Catholicism to be true and the Catholic Church to be the one established by our Lord Jesus Christ.

As to the pope’s orthodoxy, in addition to my 169 defenses of him and 348 by myself and others, see in particular:

April 9, 2020 Bible on Reverent Posture for Worship & Communion
Recent Comments
0 | Leave a Comment
Browse Our Archives
get the latest updates from
Biblical Evidence for Catholicism
and the Patheos
Catholic
Channel
POPULAR AT PATHEOS Catholic
1