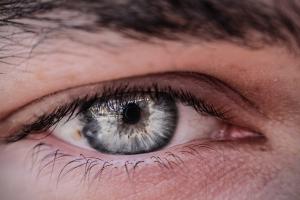 But I was wondering (as a great lover of the history and development of ideas), “where was this notion derived in the first place?” Generally, there is some sort of basis or rationale for beliefs, whether good or bad reasoning is employed.  In other words, they usually don’t come from nowhere. So what is (or might be) the origin of this curious belief?

I did some Google searching today, and to my surprise, there is an actual (broad / somewhat related) scientific case to be made, which ties a sexual practice related to ejaculation to visual maladies. These are scientists reporting the phenomenon, not me. Perhaps old Dr. Burns was onto something after all?

The connection involves the Valsalva maneuver, which (according to Wikipedia) “is performed by moderately forceful attempted exhalation against a closed airway, usually done by closing one’s mouth and pinching one’s nose shut while expelling air out as if blowing up a balloon.” Urologist Dudley Seth Danoff referred to this and related it to deliberately delayed ejaculation in his article, “A Tried-And-True Technique For Delaying Orgasm” (Tower Urology, no date):

Another approach is called the Valsalva maneuver. Again, one is brought close to the point of ejaculatory inevitability and then increases abdominal pressure by bearing down as if one were having a bowel movement (without, of course, having one).

During orgasm the valsalva manoeuvre can produce a sudden increase in retinal venous pressure resulting in vessel rupture and haemorrhagic retinopathy. . . .

The relationship between sexual activity and retinal haemorrhage was first described in a case series of six patients by Friberg et al [in 1995] . . .

The retinal vasculature is also subject to these effects and significant increases in pressure can cause spontaneous rupture of parafoveal vessels resulting in haemorrhagic retinopathy and sudden loss of vision in one or both eyes. Valsalva retinopathy was first described by Duane in 1975 [see that article] who contemplated that ocular signs associated with sudden pressure elevations are subject to the force of compression throughout the valsalva manoeuvre and the previous state of the retinal vessels. The valsalva manoeuvre is used by the male during sexual intercourse to delay the ejaculatory response. . . .

Friberg et al hypothesised that on orgasm, abrupt increase in sympathetic outflow produces a sudden increase in preretinal vascular tone and pressure which when opposed by reduced venous outflow due to the valsalva manoeuvre can result in such a high elevation in retinal intravascular pressure that the retinal vasculature can rupture causing haemorrhage. This is the likely mechanism for post coital valsalva retinopathy.

I couldn’t access the entire referenced article by Friberg et al: “Sudden Visual Loss Associated With Sexual Activity” [Arch Ophthalmol. 1995;113(6):738-742], but I could access the Abstract:

Patients:  Six patients presented with a precipitous decrease in vision in one eye with no apparent predisposing factors. After obtaining a careful history, each patient revealed that he or she had been engaging in rigorous sexual activity immediately before experiencing the visual loss. . . .

Conclusions:  Sudden debilitating visual loss may occur during sexual activity from the rupture of retinal blood vessels in the macular region or from the development of vitreous bleeding from an induced retinal tear.

We know from Michaels’ description of this article, that Friberg referred to the Valsalva maneuver. Khalid Al Rubaie  and J. Fernando Arevalo, in their article, “Valsalva Retinopathy Associated with Sexual Activity” (Case Rep Med., 5-5-14), concurred:

Valsalva retinopathy is an induced preretinal hemorrhage that can occur in the macular area. It usually occurs secondary to Valsalva’s maneuver, a forcible exhalation effort against a closed glottis, causing a sudden rise in intrathoracic pressure. This unexpected increase in the venous pressure can rupture the perimacular vessels resulting in premacular hemorrhage. . . .

In summary, sexual activity is a well known risk factor for Valsalva retinopathy. Hemorrhage can be severe and might require surgical intervention.

This case series study included 21 eyes of 21 patients referred to retina clinic of Farabi eye hospital and two private eye clinics during 2001-2006 with sudden loss of vision and clinical diagnosis of premacular hemorrhage due to valsalva retinopathy. . . .

A 13-year-old male with no previous medical history presented to an emergency department with acute-onset, painless vision loss in his right eye. On presentation, visual acuity in the involved eye was 20/200 [which means he was legally blind in that eye], . . .

Although the clinical assessment was suggestive of Valsalva retinopathy (see sidebar), the patient and his parents denied any history of antecedent Valsalva-type maneuvers or trauma. . . .

So there you have it. Take it for what it’s worth. Nothing like science . . .

January 22, 2022 Mozart's Musical Genius & His Catholicism
Recent Comments
0 | Leave a Comment
"Hi Dave, can I recommend you sending Cameron a copy of your book "Debating James ..."
PAULINUS MAXIMUS Thoughts: James White & Cameron Bertuzzi ..."
""The stars can influence human behaviors by affecting the passions (which are part of the ..."
Dr. D Did St. Thomas Aquinas Accept Astrology?
""As for natal charts: that is still attempting to predict the future, no (by providing ..."
Dr. D Did St. Thomas Aquinas Accept Astrology?
"Exactly right. He can't take any criticism back. I've dealt with the man for 27 ..."
Dave Armstrong Thoughts: James White & Cameron Bertuzzi ..."
Browse Our Archives
Related posts from Biblical Evidence for Catholicism