The Wolf Who Broke His Teeth on the Fold – Questions from M August 7, 2017 John Mark N. Reynolds 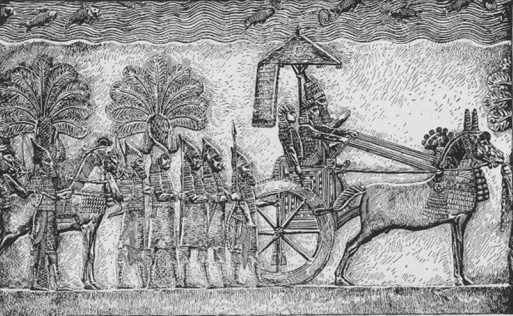 Much is lost that should not have been forgotten, but what has been recollected comes in fragments. So when there is an event we know happened, it has inspired legends, Scripture, and poets.

The Assyrian came down like the wolf on the fold,
And his cohorts were gleaming in purple and gold;
And the sheen of their spears was like stars on the sea,
When the blue wave rolls nightly on deep Galilee.
Like the leaves of the forest when Summer is green,
That host with their banners at sunset were seen:
Like the leaves of the forest when Autumn hath blown,
That host on the morrow lay withered and strown.
For the Angel of Death spread his wings on the blast,
And breathed in the face of the foe as he passed;
And the eyes of the sleepers waxed deadly and chill,
And their hearts but once heaved, and for ever grew still!
And there lay the steed with his nostril all wide,
But through it there rolled not the breath of his pride;
And the foam of his gasping lay white on the turf,
And cold as the spray of the rock-beating surf.
And there lay the rider distorted and pale,
With the dew on his brow, and the rust on his mail:
And the tents were all silent, the banners alone,
The lances unlifted, the trumpet unblown.
And the widows of Ashur are loud in their wail,
And the idols are broke in the temple of Baal;
And the might of the Gentile, unsmote by the sword,
Hath melted like snow in the glance of the Lord!

This powerful poem tells of a mighty miracle where the Jewish people were saved from the wrath of an evil King. If I were to pick a single battle in history that changed everything, I might pick this one. The Jewish people survived an Assyrian conqueror who would have dealt with them more ruthlessly. Judgement was coming to Judah, but it would come from the Babylonians who would not exterminate and displace all the Jewish people. There would be a restoration.
The Bible gives God the credit for the victory. This was a mighty miracle and it is a good test case for a question from my summer interlocutor M*:

22. What if any contemporary extrinsic evidence from the time corroborates any of the supernatural claims of made in the Bible?

Jerusalem should have died. It did not.  We have Sennacherib boasting of taking much spoil from Judah and burning many cities, the Bible concedes this and archeology confirms, but then Sennacherib insinuates total victory. History is not kind to his boasts: “Further, although Sennacherib’s palace at Nineveh was decorated with reliefs depicting his campaigns and victories including many detailing the siege of Lachish, Jerusalem never appears among them.”

The Bible is right: Jerusalem did not fall to Sennacherib.

This is contemporary, extrinsic evidence from the time. Does it corroborate the claims made in the Bible? It does, but through the lies of omission in the self-serving records of a tyrant. He does not say God stopped him . . .  centuries later the Greek historian Herodotus insinuates Sennacherib faced a plague of mice that stopped his army. Of course, the Greek historian is echoing the divine destruction of the Greek army at Troy by Apollo. (Iliad Book I)**

What M* might say is that it does not corroborate the supernatural nature of the deliverance.  But then would we expect this? Would it help? We know Jerusalem should have fallen and did not. Why? The Bible says God was the primary cause, but God can be the primary cause of an event using natural means.

Miracles are the actions of a person, not the suspension of any real laws. We are persons and we act consciously, but most of what we do can be explained through natural causes. My Houston bedroom is cool tonight and chemistry could explain why this is so with no reference to me. Yet fundamentally, I set the thermostat months ago and so the temperature is what it is. The full explanation for my bedroom’s temperature is chemical and the action of a person: me.

We have an unlikely event reported in Scripture that external sources show happened. These external sources (naturally) do not give credit to the God of the Hebrews. Even if they did, directly, that would not mean that God acted . . . only that the Assyrians had accepted the story of the Hebrews! In short, there is external, contemporary evidence for a Biblical miracle, if one means the event, but not of God’s agency. Why would there be? How could we know if we adopted a close minded approach to personal agency as a cause in history?

When a personal agent uses natural means, especially early in time (like setting up a thermostat or a plague), then this agency can be easy to miss. When my darling daughter was very young, we played Candy Land and she loved to get the Queen Frostine card. Long before we would play (at the end of the last week’s game), I would set the deck so that she would get it. (“Mary Kate will go first!”) Fortunately for me, there is no prophet to tell what was happening so my secret was safe until I revealed it decades later. If her defeated brothers had written about most games (I was not stupid enough to always have her win), they might have dissembled like Sennacherib or attributed defeat to bad luck.

It was all personal agency and the love of a dad for his daughter.

Sennacherib lied to his people and to himself, but Jerusalem did not fall. Why? A skeptic will never be sure, but Lord Byron knew his power “hath melted like snow in the glance of the Lord.”

**I would translate the title of Apollo given here as “mouse-god.”

August 6, 2017
Dung to Lilies: In the Beauty of the Lilies He Transfigures You and Me
Next Post

August 8, 2017 Miracles: Happening Now
Browse Our Archives
get the latest updates from
Eidos
and the Patheos
Evangelical
Channel
POPULAR AT PATHEOS Evangelical
1