“. . . A Definitive Guide to His Central Thoughts and Ideas“ 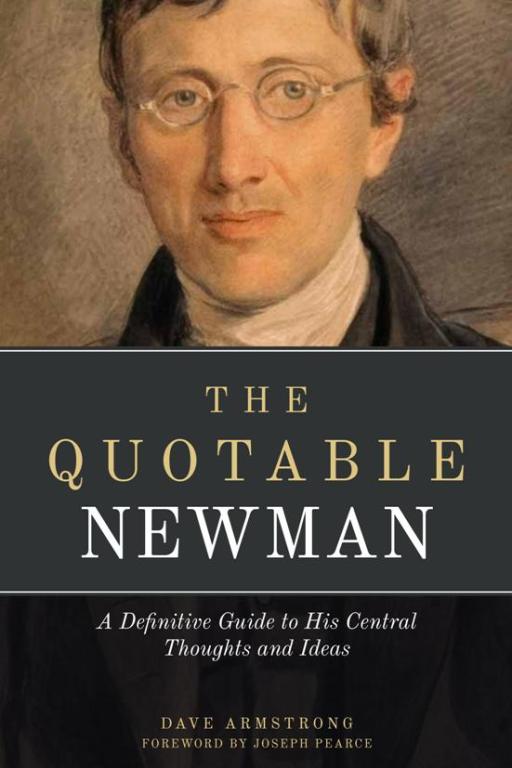 [cover design by Carolyn McKinney]— For purchase information, go to the bottom of the page —
[see also The Quotable Newman, Vol. II]

Cardinal Newman on Rationalistic Theological Liberalism vs. a Reasonable Catholic Faith (Tracts of the Times No. 73 of 1836)

Dr. Jeff Mirus (Catholic Culture, “Reading the Greats During the Year of Faith: Newman and Chesterton”, 11-20-12)

Cardinal Newman does not admit of sound-bites but Dave Armstrong has done a creditable job of giving us easily digestible portions of Newman’s thoughts on a host of topics, conveniently arranged in alphabetical order with a precise citation following each entry. This is a wonderful addition to Newman scholarship.

Cardinal Newman’s Conversion Odyssey, in His Own Words (September 1839 to December 1845)  [list compiled from two of my Newman quotations books] [19 March 2015]

Meet the Author, with host Ken Huck, produced by Radio Maria. 45-minute interview about my books, The Quotable Newman, and The Catholic Verses, 17 January 2013. I’ve also posted my written interview notes, that contain a lot of material that we didn’t get to, due to the constraints of time.

[written by the eminent Catholic biographer, Joseph Pearce — read it in its entirety]
*

The aim of this book is a simple, albeit very ambitious one: to compile notable quotations from Blessed John Henry Cardinal Newman (1801-1890) in the areas of theology and Church history, so that his thinking and wisdom might be more accessible to the reading public, and particularly to students (in school or out) of Christian theology and its history.

As with most works of this sort, the goal is to help make the quoted author more widely known: to spark interest and pique curiosity in more than a few readers. I envy those who will be embarking for the first time on a journey of serious reading of Cardinal Newman. It’s pure joy for any thinker (and any Christian) to do so.

I also seek to create a handy reference source that can be consulted when particular topics come up. Newman’s thought is so full of insight that it seems to have no end. With the help of the Holy Spirit and whatever gifts granted to me by God’s grace, I shall do my best to compile the most substantive, pithy, and memorable quotations of Cardinal Newman that I can find.

The task of selection is necessarily subjective, and daunting, but this is a task I had to do, due to the huge debt I owe to John Henry Newman, in relation to my own spiritual journey: one that brought me happily to the Catholic Church in 1990, exactly a hundred years after Newman’s death (largely as a result of reading his Essay on the Development of Christian Doctrine).

This work is, therefore, the fruit of a proverbial “labor of love.” Whether it was labor at all, however, is questionable, since the experience of perusing all of these wonderful books and letters (even the selection process itself), and the enjoyment obtained in so doing, made any “work” involved almost beside the point.

I do have some experience in putting together a book of quotations: I was the editor for The Wisdom of Mr. Chesterton (Charlotte: Saint Benedict Press, 2009, 378 pages). A major difference between that volume and this one, however, is the length of citations. I restricted myself in that instance to single sentences. But this would be impossible to do in Cardinal Newman’s case, because of his flowing, elaborate, complex, Victorian prose. Nevertheless, I shall attempt to keep the excerpts as brief as I can, without giving up any essential meaning.

Similar to the Chesterton collection, I will note sources with abbreviations and generally use chapter numbers rather than page numbers (since the latter will vary with different editions). I will attempt to keep quotations chronological within categories.

As indicated in the subtitles, I have narrowed the subject matter somewhat: primarily to theology and Church history. Newman also wrote widely on philosophy, education, spirituality, sociology or current affairs (Catholics in England, etc.), and produced poetry and fiction, among other things. But in particularly notable instances or topics, I was quite willing to extend the parameters and make an exception to my own “rule” — out of love of Cardinal Newman’s style, insight, and wisdom.

I chose to concentrate on theology and the history of theological doctrine and the Church, since those topics lend themselves to thematic unity and a coherent collection that can be referenced and used for the purpose of catechesis or apologetics (my own area).

Given the vast amount of Newman’s writing involved, I thought it best to not attempt to cover everything. But for the areas I have covered, I have sought to be quite comprehensive, in order to provide a reference work of lasting value and utility: something a little different from the hundreds of works on Newman, and various anthologies and collections of his writing thus far available.

I need to note two factors that were important in my selection process, as an editor, so readers can be duly informed. As most who are reading this already are aware, Cardinal Newman was an Anglican for roughly the first half of his life, and a Catholic thereafter. Not infrequently in his earlier life, he not only explained, but vigorously advocated positions that he later renounced.

The question then arises, as to the criteria for selection of quotations in the earlier period. Or, more specifically: are they to be conceptualized as presenting (all things considered), at least in part, the “polemical Anglican (at times, outright anti-Catholic), Via Media proponent Newman” or rather, “the proto-Catholic Newman who anticipates and looks forward to his later Catholic beliefs, and holds them in kernel form”?

I have decided (probably predictably) to follow the latter course. Generally, I have not included opinions that the later Newman would have disavowed, or literally did renounce (as we see in his later corrective notes of his earlier writing). I am a Catholic, and I’m afraid that my natural bias in that direction considerably affected how the Anglican period quotations were selected and edited.

Yet I don‘t think this is a complete “loss” for Anglican or otherwise non-Catholic readers, since the (ecumenical) result is an “Anglican Newman” who is expressing ideas concerning which Catholics and more traditional or “high” Anglicans can readily agree. It is not unimportant to highlight agreement where it is present. Non-Catholic readers can also see how very much a Catholic can agree with the Anglican Newman’s thinking, since I have deliberately set out to highlight the larger areas of agreement (in light of his later change of mind).

The Anglican devotee of Cardinal Newman could, in this sense, particularly benefit from the earlier quotations insofar as they present a “Catholic Newman” (i.e., Catholic in the more all-encompassing definition Anglicans use) who is not, in these compiled instances, expressing pointed disagreement with another “branch” (so to speak) of the universal Catholic Christian Church.

The second factor that ought to be highlighted (something Introductions are good for!) is my determination to include, by and large (though not always) passages in Newman’s writing that give actual arguments for positions, rather than being only beautifully expressed descriptions or sentiments and not necessarily defenses. Newman is such a good writer that virtually everything he writes is eloquent, in any event; but my goal is to emphasize the apologist Newman: the one who can provide a rationale for why we should agree with his positions.

Thus, it is apparent, that my status as a Catholic, and as a Catholic apologist, by occupation, has influenced how I edit. But I suppose this is to be expected, and I don‘t believe it detracts from the utility of the overall effort in the slightest, especially since I have stated my goals and “biases” upfront, so as to avoid any misconception.

May the reader enjoy and be edified and educated by what I have compiled from Blessed John Henry Cardinal Newman’s delightful writing. 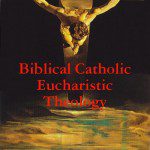 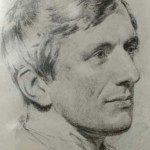 March 5, 2011 Newman on Theological Liberalism ("Tracts of the Times" No. 73)
Recent Comments
0 | Leave a Comment
Browse Our Archives
Related posts from Biblical Evidence for Catholicism