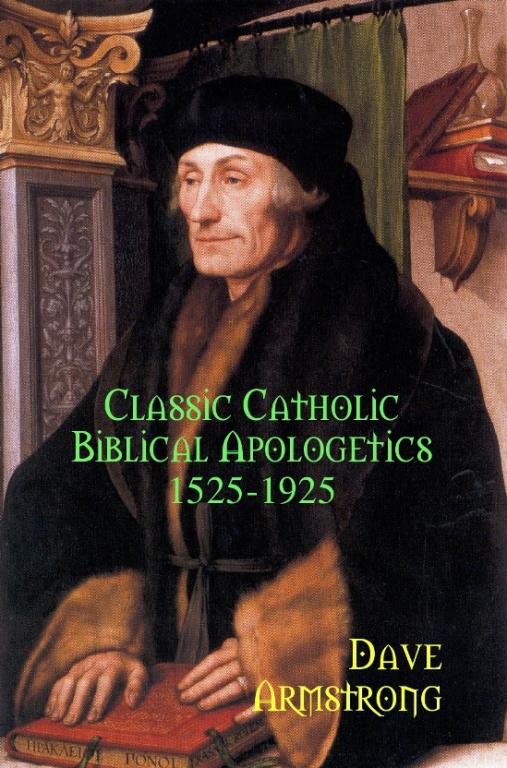 — to purchase, go to the bottom of page —

Bibliography and Abbreviations (p. 9) [see below]

INTRODUCTION
***
The present volume came about as a result of reflection upon two great loves of mine: biblical apologetics in defense of the Catholic faith, and compilations of great historical Catholic quotations and arguments. My overwhelming methodological emphasis, as a full-time apologist these past ten years, is on the former, as is readily seen in the titles of many of my books, such as A Biblical Defense of Catholicism (Sophia Institute Press, 2003), The Catholic Verses (Sophia, 2004), and Bible Proofs for Catholic Truths (Sophia, 2009). My website (now a blog) online since 1997, is entitled “Biblical Evidence for Catholicism.”

Also among my books are compilations of the quotations of Blessed John Henry Cardinal Newman and G. K. Chesterton: The Quotable Newman (Sophia, 2012) and The Wisdom of Mr. Chesterton (Saint Benedict Press, 2009).

As I pondered these two strains of what I like to do, writing-wise, I developed a desire to start compiling some historic Catholic apologetics that centered on biblical argumentation, as a counter to the Protestant emphasis (sola Scriptura), and came up with the idea of “post-Protestant Catholic biblical apologetics” that could be collected from online versions (a lot less typing!), since it is all public domain material.

In this way I could continue working in both areas that I really enjoy, all in one new project; and complement the quotations I have already collected. Cardinal Newman mostly concentrated on Anglicanism, insofar as he wrote (relatively little) about comparative exegesis, whereas Chesterton didn’t write biblical apologetics much at all, and was far more interested in opposing the ideas of secularism and agnosticism and dealing with Protestantism from a cultural and historical standpoint.

The person I initially had in mind when pondering this book, was St. Francis de Sales, whose Catholic Controversy is a wonderfully insightful exercise in biblical apologetics, specifically against Calvinists (multiple thousands of whom he won back to the Catholic faith through his tireless efforts). This great saint and apologist will be cited frequently in this book (probably more than any other).

All in all, I shall cite twelve classic Catholic authors, and categorize the arguments or biblical commentary in order of the biblical books. Multiple topics often appear under one Bible passage, and the Index of Topics at the end (69 total) is very handy to locate various subjects. 228 biblical passages are featured (including 50 from the Old Testament).

Only excerpts that utilize directly biblical argumentation will be used. And all or virtually all references to Catholic magisterial sources will be omitted, so that Protestant readers can observe Catholic arguments solely devoted to the text of the Bible: whether positively presenting a Catholic position, or opposing an erroneous Protestant doctrine allegedly supported by the same Bible.

I hope and pray that readers will enjoy discovering and learning from this wonderful treasure-trove of historic Catholic apologetics, as much as I enjoyed locating these precious gems and compiling them in some kind of accessible order.

I intend for this book to be a very practical aid in apologetic outreach, and a reference source. It is essentially a “Classic Catholic Apologetic Commentary”: but devoted to the post-Protestant period up through the early 20th century, rather than the patristic period, or the age of St. Thomas Aquinas and the Scholastics, as we often see in other similar works. Perhaps it can fill a certain “time period” void in the apologetic literature.

[mostly from Wikipedia and the 1910 Catholic Encyclopedia]
***
St. Thomas More (1478-1535)
***
English lawyer, social philosopher, author, statesman and noted Renaissance humanist; counselor to King Henry VIII of England and, for three years, Lord Chancellor. He wrote his famous political commentary Utopia in 1516, and tracts in opposition to the teachings of Martin Luther and William Tyndale. More refused to accept Henry VIII as Supreme Head of the Church of England: a status the king had been given by a compliant parliament through the Act of Supremacy of 1534. He was imprisoned in 1534 for his refusal to take the oath required by the First Succession Act, because the act disparaged the power of the Pope and Henry’s marriage to Catherine of Aragon. In 1535, he was tried for treason, convicted on perjured testimony and beheaded. Many historians argue that his conviction for treason was unjust, and even among some Protestants his execution was viewed as heavy-handed. Erasmus saluted him as one “whose soul was more pure than any snow, whose genius was such as England never had.” Jonathan Swift said he was “the person of the greatest virtue this kingdom ever produced”. G. K. Chesterton wrote that “he may come to be counted as the greatest Englishman, or at least the greatest historical character in English history.” And Winston Churchill stated that he “stood forth as the defender of all that was finest in the medieval outlook.” The Catholic Church beatified him in 1886 and declared him a saint in 1935.
***
Desiderius Erasmus (1466-1536)
[on the cover]

St. Francis de Sales’ Argument Against Total Depravity and for the Indefectibility of the Church, from the Psalms [blog]

St. Francis de Sales’ Argument for the Indefectibility of the Church (Acts 20:28) [Facebook]

Argument for the Papacy from the Analogy of Abraham [from St. Francis de Sales; Facebook]

Erasmus on the Perspicuity of Scripture and Circular Protestant Reasoning [Facebook]

Bishop Bossuet on Luther’s Contradictions Regarding Assurance of Salvation vs. Non-Assurance of Repentance [Facebook]

Zwinglians and Calvinists Correctly Argued Over Against Luther, that if “This is My Body” is Taken Literally, Catholic Transubstantiation is Far More Reasonable than Lutheran Consubstantiation [from Bishop Bossuet; Facebook]

Cardinal Gibbons: Analogy of the Papacy to the High Priest of the Old Testament [Facebook]

Sacrifice of the Mass in the Synoptic and Pauline Consecration Formulas From the Last Supper [from Ferdinand Prat, S. J.; Facebook]

The “Obedience of Faith” in Paul and its Soteriological Implications (Justification and Denial of “Faith Alone”) [from Ferdinand Prat, S. J.; Facebook]

The Nature of Papal Leadership: “Servant of Servants” [from Karl Adam; Facebook] 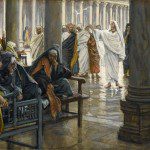 November 3, 2011
"Leaven" of the Pharisees: Hypocrisy or False Doctrine?
Next Post 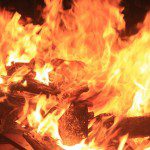 November 6, 2011 Calvin Supports Death Penalty for Heresy After Servetus
Recent Comments
0 | Leave a Comment
Browse Our Archives
get the latest from
Biblical Evidence for Catholicism
Sign up for our newsletter
POPULAR AT PATHEOS Catholic
1

Toxic Masculinity: What It Is, and...
suspended in her jar
Books by This Author Books by Dave Armstrong