How to Receive Communion: Tradition & Abuses

Including Discussion of Extraordinary Ministers of Holy Communion 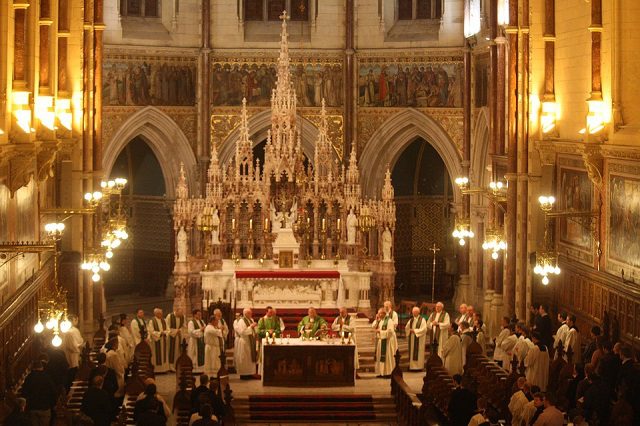 [words of others in my old discussion list are in blue]

Ok, this is how Holy Communion is given in every single Catholic church within driving distance of me: Most churches now have ushers that will stand at the head of your pew when it’s your “turn” to go up. We remain kneeling until our turn. We then stand, form a line behind those ahead of us, and walk slowly toward the Priest or Deacon, or server. They lift the Host, say “This is the Body of Christ” (although some simply say “The Body of Christ”), we say “Amen”, and cross ourselves, and either offer our hands, or open our mouths . Most who receive “in the hand” step to the side, face the altar, and cross themselves, but I’ve noticed some don’t do that. Most receive “in the hand” – I almost never see anyone receive “by mouth” any more.

I receive in the mouth except on rare occasions where I am at a church where virtually everyone receives in the hand. Since we have altar rails in the front of our church where one kneels to receive Holy Communion, I am kneeling when I receive. I bow before I receive at other churches where people are standing. And I seek out the priest if at all possible, because in most churches, it is unnecessary to have so many eucharistic ministers — just your typical American pragmatism and being-in-a-hurry, in my opinion.

And I think there are liberal and impious overtones to that: all these people (though well-intentioned in most cases, no doubt) are up on the altar. A friend of mine calls them “busybodies.” I rather like that.  It takes away the sole prerogatives of the priest in a subtle way. I know, it’s subjective, and not absolute, yet liberal theological notions and liturgical abuses have a way of creeping in; a sort of diabolical incrementalism (just as in politics and morality).

At every church I’ve been to (for ten years now). I have always seen someone who receives in the mouth. It is not a liturgical absolute, but it should be recognized that this was the norm until recently. Fr. Peter M. J. Stravinskas, in his The Catholic Answer Book (Huntington, Indiana: Our Sunday Visitor, 1990, pp. 92-99), informs us of the following:

1. Communion in the hand, standing, was the norm for the first few centuries.
2. As eucharistic doctrine developed and abuses increased, the Church mandated that communion was to be on the tongue only (by the early Middle Ages).
3. Communion on the tongue is still the universal practice for the churches of the East, both Catholic and Orthodox.
4. During the Protestant Revolt, communion in the hand became a way of asserting the priesthood of the laity and a symbol of the denial of the Real Presence; therefore the Catholic Church held firm.
5. Liberal Catholic countries such as Holland, France, and Canada began experimenting with communion in the hand in the late 60s.

6. Pope Paul VI, in the 1969 document Memoriale Domini, outlined all the reasons why communion in the hand was inadvisable and why the traditional method was to be preferred and maintained. But he allowed a “loophole” for countries which had begun the practice illicitly to petition the Holy See for permission.
7. In 1977 a bare majority of bishops in the United States — going against the local tradition- – voted for communion in the hand and received permission to introduce the practice.
8. Most countries in the world do not permit communion in the hand.
[ . . .]
10. No one can be forced to stand to receive communion.
11. No one can be denied the right to receive on the tongue.
12. For the above reasons, Pope John Paul II frowns upon the practice of communion in the hand. It is against universal liturgical law.
13. John Paul II has specifically addressed these matters in Inaestimabile Donum, in which he spoke forcefully against several eucharistic abuses.
14. John Paul II has repeatedly spoken out strongly against lay people distributing Holy Communion unnecessarily. He has said that priests who fail to minister the Eucharist themselves exhibit a “reprehensible attitude.”
15. The Pontifical Commission for the Authentic Interpretation of the Code of Canon Law stated that lay people are never to serve as extraordinary ministers of the Eucharist when sufficient priests and deacons are available (not just ones who are celebrants of the Mass).
[ . . . ]
17. Lay Eucharistic ministers, according to Immensae Caritatis (Pope Paul VI’s decree permitting this practice) and the revised Code of Canon Law, are only supposed to be used in these circumstances:

a) Lack of a priest, deacon, or acolyte;

b) Inability of the priest to function due to health or advanced age;

The lived reality in the United States has had negative consequences. This is one of the most serious problems to emerge in the postconciliar Church in America, since it touches on the very heart of the Catholic Faith and practice . . . in a most visible way, affecting every Catholic . . .

[This] fosters the American ‘in and out’ mentality of Sunday Mass . . . This approach, though almost always innocent, nonetheless culminates in a desacralization of the Church, the Eucharist, and the priesthood . . .

The whole point of the [Second Vatican] council’s theology of the laity was that the laity had their own unique role to play in bringing the Gospel to contemporary humanity – in the world, not in the sanctuary . . .

The role of the priest is to preach and administer the sacraments, so that the laity can be faithful witnesses in the world, thus inviting people there to follow Christ . . .

Please note that we are not concerned with heresy here but with an imprudent, unwise liturgical practice, reflective of bad sociology. Like other Americanisms in the Church, this one fails to take a holistic view of reality, neglects long-range implications, and does not take seriously the nonverbal, symbolic power of liturgical communication . . .

The Church refers to [eucharistic servers] as extraordinary ministers of Holy Communion. They are so called because they are to function only in extraordinary circumstances . . .

And we wonder why people lose their Faith in the Real Presence and even leave the Church!

They seem to be reverent, as far as I can tell. No one stuffing their mouth casually as they fish in their pocket for their car keys!!

That is not at issue, but there are larger, troubling implications, as indicated above. Something has to explain the loss of faith in the Real Presence. These factors, though no doubt not the only ones, seem to me to be plausible explanations of much of the loss of traditional faith and understanding. The whole point of ritual is to represent and to “positively condition” a deeper reality (the Real Presence). Change the ritual, and you undermine the reality. It seems obvious to me. And so we have seen a mass exodus from Catholic orthodoxy around the world.

Then you return to your seat, kneel, pray, and remain kneeling until [the dismissal].

Fr. Stravinskas notes the irony that many people meditate in their seats for a time, equaling that which the whole process would take without the lay servers. So if time is truly an issue, they should skidaddle out the door; otherwise, why all the servers?

In any Catholic church I’ve attended here in Western New England, not when I lived in Central Florida either, nor when we lived in North Central Ohio, not in my mom’s church in Central Mass, not in my college church in Boston, not in the very Lithuanian church my grandfather attended in Upstate NY. Never seen it done that way, never. Not in over 30 years of going to church, not in over 30 years of people watching…sorry…

Very sad. And of course all these ostensibly pious, devout, good people are among those who deny the Real Presence and the wrongness of contraception. The issue of receiving in mortal sin is another very serious problem, which I will not deal with here.

The only “lack of reverence” I see is in those who boogie out the door as Communion starts, because they want to get out of the parking lot before “rush hour”… that really bugs me…

Sure; but again, the issue is a much larger one than merely the inner dispositions and outer countenance of those in the communion line. It has to do with symbol and sacrament, a sense of the sacred and of mystery, and of the awesome event which is taking place at every Mass: Christ coming to us: body, blood, soul, and divinity. Those things are undermined by many of these practices, in my humble opinion.

That’s a large part of the reason I attend a very traditional church, and why I prefer Latin Mass (Novus Ordo).

Note: this paper is from the year 2000. My position has developed and modified somewhat since then (but not greatly). I’ve certainly engaged the various arguments and opinions in much greater depth than I did in this post, which was mostly citing Fr. Stravinskas. See other related papers:

Meta Description: Discussion of the issues of proper reverence & piety at Mass, including bodily posture & reception of Holy Communion. 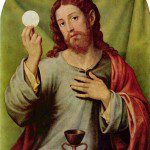 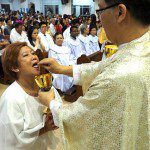 April 27, 2016 Catholic Closed Communion: A Defense
Recent Comments
0 | Leave a Comment
Browse Our Archives
get the latest from
Biblical Evidence for Catholicism
Sign up for our newsletter
POPULAR AT PATHEOS Catholic
1