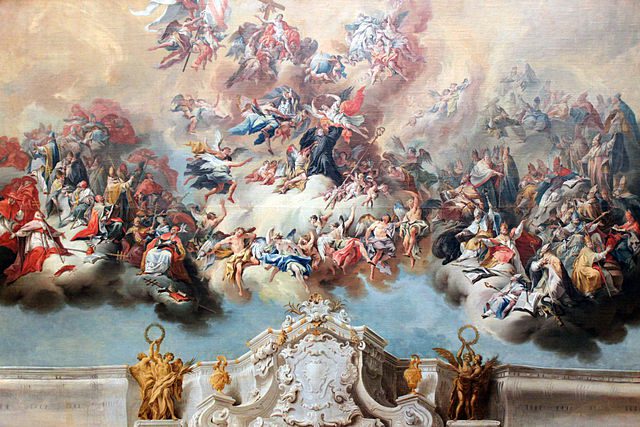 The following illustrates the logical structure of biblical arguments in favor of contact with the dead under special and specific circumstances and indirectly for the invocation of the saints in heaven (at least how I myself make the argument):

1. We ought to pray for each other (much biblical proof).

3. Therefore it makes eminent sense to ask more righteous people to pray for us (implied in same passage).

6. Dead saints are exceptionally, if not wholly, righteous and holy, since they have been delivered from sin and are present with God (21:27, 22:14).

7. Therefore, it is perfectly sensible and wise to ask them to pray on our behalf to God.

A. God desires contact between those in heaven and those on earth (this is a prior, or hidden assumption lying behind #7 above).

B. A is a necessary prerequisite for the notion of invocation or intercession of the saints. In other words, if A is untrue, then B also will be, since B is a sub-group or subset of A.

Note, then, that to support A with biblical examples, as I did, is not at all the same as supporting the full-blown doctrine of the invocation of the saints. Far from it. It is only supporting the necessary prior premise or antecedent premise. This is a fundamental logical distinction. Anti-Catholic Reformed Baptist apologist James White expressly denied A above, in these words:

This can be disposed of with one biblical example, from St. Peter, who contacted the dead when He raised Tabitha, saying, “Tabitha, rise” (Acts 9:36-41). Who was he talking to? Well, Tabitha, of course: a dead person! You can’t get much more straightforward and plain than that. Therefore, the Bible offers explicit proof that we can have contact with the dead in a certain sense, essentially different from necromancy, use of mediums, and so forth. The opposite argument against invocation of saints, then, from this perspective, is as follows:

X. God prohibits and forbids all contact between those in heaven and those on earth (passages against necromancy, occult arts, etc. are advanced as proof of this).

Y. X is a necessary prerequisite for the notion of invocation or intercession of the saints. Therefore, because X is untrue, Y is also untrue, since Y is a sub-group or subset of X. Case closed; there is no invocation of the saints, according to the Bible.

Besides the Tabitha example, I provided many more in my response, that would utterly contradict and overthrow the claim (White’s claim, and that of most Protestants) of X:

A) 1 Samuel 28:12, 14-15 (Samuel): the prophet Samuel appeared to King Saul to prophesy his death. The current consensus among biblical commentators (e.g., The New Bible Commentary, The Wycliffe Bible Commentary) is that it was indeed Samuel the prophet, not an impersonating demon (since it happened during a sort of seance with the so-called “witch or medium of Endor”). This was the view of, e.g., St. Justin Martyr, Origen, and St. Augustine, among others. Ecclesiasticus (Sirach) 6:19-20 reinforces the latter interpretation: “Samuel . . . after he had fallen asleep he prophesied and revealed to the king his death, and lifted up his voice out of the earth in prophecy, to blot out the wickedness of the people.”

B) Matthew 17:1-3 (the Transfiguration: Moses and Elijah): . . . Jesus took with him Peter and James and John his brother, and led them up a high mountain apart. And he was transfigured before them, and his face shone like the sun, and his garments became white as light. And behold, there appeared to them Moses and Elijah, talking with him. (see also Mark 9:4 and Luke 9:30-31)

C) Matthew 27:52-53 (raised bodies after the crucifixion): . . . the tombs also were opened, and many bodies of the saints who had fallen asleep were raised, and coming out of the tombs after his resurrection they went into the holy city and appeared to many.

D) Revelation 11:3, 6 (the “Two Witnesses”): And I will grant my two witnesses power to prophesy for one thousand two hundred and sixty days . . . they have power to shut the sky, that no rain may fall . . . and they have power over the waters to turn them into blood, and to smite the earth with every plague . . .

These two witnesses are killed (11:7-9), were raised after “three and a half days” and “stood up on their feet” (11:11), and then “went up to heaven in a cloud” (11:12). Many Church Fathers thought these two were Enoch and Elijah, because both of them didn’t die; thus this would explain their dying after this appearance on earth. Some Protestant commentators think the two witnesses are Moses and Elijah, because of the parallel to the Transfiguration, and also similarities with the plagues of Egypt and the fact that Elijah also stopped the rain for three-and-a-half years (James 5:17).

I’m not question-begging in the slightest. I’m simply producing biblical data that contradicts the assertion of proposition X above (as opposed to trying to prove the whole notion of invocation of saints from this one passage and other related ones). X claims that God doesn’t desire any contact between heaven and earth. The example of Samuel appearing contradicts that.

If a Protestant attempts to claim that this was not Samuel (example A), but only an impersonating demon, then my argument would be undercut. Therefore, it is relevant to establish that it was literally Samuel the prophet, appearing to Saul.

I condemned the occultic sort of “consultation of the dead” in the very section of my book that White was critiquing, that I cited in my reply under consideration. It’s not at issue. What Catholics are saying is that not all “contact with the dead, or those in heaven” is of the same nature as this prohibited sort. Anti-Catholics usually assume that the occultic type of “contact” is a category that takes in all conceivable contact whatsoever. But it is not. Accordingly, here is what I cited from my book, The One-Minute Apologist (2007):

It is not clear how these Catholic practices are any different from the séances, magic, witchcraft, and necromancy forbidden by the Bible. When you come down to it, Catholics are still messing around with dead spirits.

Catholics fully agree that these things are prohibited, but deny that the Communion of Saints is a practice included at all in those condemnations.

The difference is in the source of the supernatural power and the intention. When a Christian on earth asks a saint to pray for him (directly supported by the biblical indications above), God is the one whose power makes the relationship between departed and living members of the Body of Christ possible. The medium in a séance, on the other hand, is trying to use her own occultic powers to “conjure up” the dead — opening up the very real possibility of demonic counterfeit. Catholics aren’t “conjuring” anyone; we’re simply asking great departed saints to pray for us. If they are aware of the earth, then God can also make it possible for them to “hear” and heed our prayer requests. If this weren’t the case, then saints and angels in heaven wouldn’t be portrayed as they are in Scripture: intensely active and still involved in earthly affairs. (p. 121)

My argument had to do solely with “contact between heaven and earth”. Samuel talks to Saul, the Two Witnesses in Revelation preach and testify, and the bodies raised from the dead after the Crucifixion “appeared to many” (and it is quite reasonable to assume they spoke and communicated, rather than just walking around like a bunch of deaf and dumb zombies or Frankenstein).

About all that White and other anti-Catholics might be able to do with this is sophistically argue that God doesn’t want us to seek contact with dead saints, but does, however, initiate such contact Himself in extraordinary instances and situations (i.e., to somehow distinguish the two as completely different in essence, with one being “bad” and the other “good”).

But that breaks down, too, because Peter deliberately initiated contact with the dead Tabitha, when he talked to her and told her to rise from the dead. That is not rebuked anywhere in the Bible.

And it is implausible anyway to say that, on the one hand, God doesn’t want us to contact the dead, when it is a plain fact that He Himself caused it to happen on at least four occasions, exactly the sort of “contact” that is (morally) indistinguishable from instances of our initiating contact. In other words, the following association of propositions and events do not exactly fit together with all that much coherence:

1. God wants no one to initiate contact with dead saints.

1A. Yet He sent the dead Samuel to rebuke Saul for his sins.

1B. Yet He sent Moses and Elijah to meet with Jesus on a mountain, in plain sight of Peter, James, and John.

1C. Yet He allowed dead bodies of the departed to resurrect and walk around Jerusalem appearing to many after the Crucifixion.

1D. Yet He will send at the end of the age the Two Witnesses referred to in Revelation (thought by many commentators to be either Moses and Elijah or Enoch and Elijah) to talk to many people for three-and-a-half years (!!!).

This is, technically, an argument from plausibility, not absolutely necessary logical connections, but it still has considerable force. I would say that if #1 above were indeed true, as anti-Catholics and even most ecumenical Protestants assume and assert, it would be (arguably or speculatively) implausible for God to allow 1A, 1B, 1C, and 1D to occur, as they send a message quite arguably at odds with proposition #1.

To illustrate by analogy, it would be like saying, as a parent, “children shouldn’t seek to have ice cream, because that is an altogether evil thing, and therefore forbidden by parents.” But then the same parent gives the children ice cream twice a week. Would it really make sense to claim that it was evil for the children to seek an “evil” thing, while the parents themselves provide the “evil” thing themselves, that they told the children never to seek, on grounds that it was wicked to do so? Is that not a radically mixed message, and a bit incoherent?

Likewise, in the present case. Therefore, there is an indirect relation between these events and invocation of saints. But I only claim as much as I originally did: this biblical evidence unarguably, indisputably disproves the claim that God wants no such contact or communication at all. 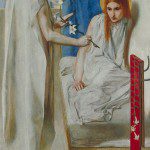 December 6, 2016
Catholics: "SO Dogmatic About the Perpetual Virginity of Mary!"
Next Post 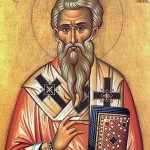