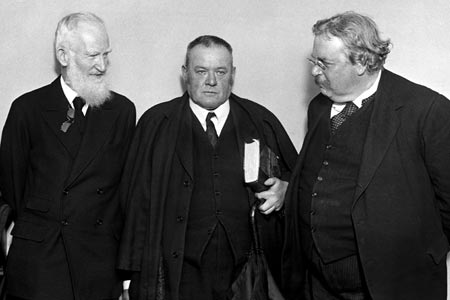 Gilbert Keith Chesterton (1874-1936), a famous convert to Catholicism, wrote brilliantly about three phases of conversion, which seem to be fairly typical of many, if not most, converts (including myself):

The convert commonly passes through three stages or states of mind. The first is when he imagines himself to be entirely detached . . . that of the young philosopher who feels that he ought to be fair to the Church of Rome. He wishes to do it justice; but chiefly because he sees that it suffers injustice . . . I had no more idea of becoming a Catholic than of becoming a cannibal. I imagined that I was merely pointing out that justice should be done even to cannibals . . .

The second stage is that in which the convert begins to be conscious not only of the falsehood but the truth . . . It consists in discovering what a very large number of lively and interesting ideas there are in the Catholic philosophy . . . This process, which may be called discovering the Catholic Church, is perhaps the most pleasant and straightforward part of the business . . . It is like discovering a new continent full of strange flowers and fantastic animals, which is at once wild and hospitable . . . It is these numberless glimpses of great ideas, that have been hidden from the convert by the prejudices of his provincial culture, that constitute the adventurous and varied second stage of the conversion. It is, broadly speaking, the stage in which the man is unconsciously trying to be converted . . .

The third stage is perhaps . . . the most terrible. It is that in which the man is trying not to be converted . . . He is filled with a sort of fear . . . He discovers a strange and alarming fact . . . a truth that Newman and every other convert has probably found in one form or another. It is impossible to be just to the Catholic Church. The moment men cease to pull against it they feel a tug towards it. The moment they cease to shout it down they begin to listen to it with pleasure. The moment they try to be fair to it they begin to be fond of it . . .

All steps except the last step he has taken eagerly on his own account, out of interest in the truth . . . I for one was never less troubled by doubts than in the last phase, when I was troubled by fears. Before that final delay I had been detached and ready to regard all sorts of doctrines with an open mind . . . I had no doubts or difficulties just before. I had only fears; fears of something that had the finality and simplicity of suicide . . . It may be that I shall never again have such absolute assurance that the thing is true as I had when I made my last effort to deny it . . .

At the last moment of all, the convert often feels as if . . . he is look through a little crack or crooked hole that seems to grow smaller as he stares at it; but it is an opening that looks towards the Altar. Only, when he has entered the Church, he finds that the Church is much larger inside than it is outside . . .

There is generally an interval of intense nervousness . . . To a certain extent it is a fear which attaches to all sharp and irrevocable decisions; it is suggested in all the old jokes about the shakiness of the bridegroom at the wedding . . . He wonders whether the whole business is an extraordinarily intelligent and ingenious confidence trick . . . There is in the last second of time or hair’s breadth of space, before the iron leaps to the magnet, an abyss full of all the unfathomable forces of the universe . . . That anything described as so bad should turn out to be so good is itself a rather arresting process having a savour of something sensational and strange . . .

In proportion as men know less and less of the subject . . . they attempt some simple definition of the mind which ultimately accepts Catholicism. They will call it a desire for security; or an attraction of the senses . . . A very little experience of typical converts in our time makes nonsense of such theories. Men and women enter by every conceivable gate, after every conceivable process of slow intellectual examination, of shock, of vision, of moral trial . . .

The Church is the natural home of the Human Spirit. The truth is that if you seek for an explanation of the phenomenon of conversion under any system which bases that phenomenon on illusion, you arrive at no answer to your question.

Neither Protestants nor Roman Catholics are entitled to act as though conversions in their direction always proceeded from sincerely Christian motives, while conversions in the other direction always proceeded from selfish or ignoble motives. Motivation is a complex and subtle thing, especially in matters of religion and most especially in a decision for or against conversion . . . Pilgrims in both directions are motivated by a mixture of desires and convictions . . .

The road to Rome has often been the road to a synthesis of faith and intellect which appeared impossible anywhere else. Americans . . . are surprised to see the number of intellectuals in Britain and in Europe who take the road to Rome in order to find freedom for their intellectual and cultural pursuits. Graham Greene, Evelyn Waugh, Edith Sitwell, Sigrid Undset, Gilbert K. Chesterton — these and many more transferred their allegiance to Rome because Protestantism did not seem to them capable of coordinating Christianity and culture without sacrificing one or the other or both . . . To all of them Rome represented a liberating force within whose walls they could do their creative work . . . There are certainly many instances where conversion to Roman Catholicism did not destroy, but rather heightened the creativity of a writer or artist . . .

Where they wanted to go, varied from one individual to the next, but a prominent feature for most of them was the reestablishment of Christian unity. 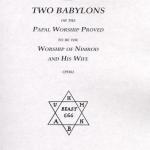 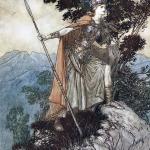 August 14, 2017 Dialogue w Friendly Atheist #3: Music, Longing, & Mysticism
Recent Comments
0 | Leave a Comment
"It's a silly article. All its shows is that Irenaeus was wrong about one thing. ..."
Dave Armstrong Reply to Baptist Gavin Ortlund on ..."
"I did reach out to him in my existing response, which I notified him of ..."
Dave Armstrong Thoughts: James White & Cameron Bertuzzi ..."
"Mr. Armstrong, I think this article is a good response to the real presence: https://theotherpaul64.blog...As ..."
Analytic Computist Reply to Baptist Gavin Ortlund on ..."
"Hi Dave, can I recommend you sending Cameron a copy of your book "Debating James ..."
PAULINUS MAXIMUS Thoughts: James White & Cameron Bertuzzi ..."
Browse Our Archives
Related posts from Biblical Evidence for Catholicism