God in Heaven & in His Temple: Contradiction?

God in Heaven & in His Temple: Contradiction? November 23, 2020 Dave Armstrong 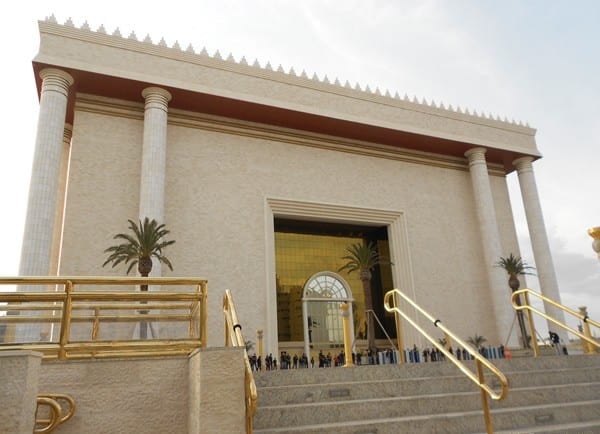 Dr. Steven DiMattei is a biblical scholar and author, formally trained in the New Testament and early Christianity, with M.A degrees in Classics and Comparative Literature as well. Rumor has it that he is an atheist, but I haven’t been able to confirm that on his site. He put up a website called Contradictions in the Bible. It seems inactive now (or he has lost interest or moved onto other things: who knows?), but the themes are things I really enjoy discussing and debating, and his articles are still online for all to see; thus fair game for critique — and stimulating food for thought, too. There is almost nothing I like to discuss and think about more than the interpretation of the Bible. Steven wrote in a post dated 5-7-16:

One of my reasons in choosing the word “defend” to describe my aims as a biblical scholar and author was in part to attract Christian apologists to my work and hopefully to get them to read these ancient texts on their terms and from within their own cultural contexts and to create a conversation around the biblical texts, their authors, and their competing beliefs, messages, worldviews, theologies, etc. As you can imagine this has proven quite difficult, nay impossible. Many Christian apologists and fundamentalists just cannot read, or simply identify, the text on its own terms separate from the beliefs and assumptions about the text handed-down through this collection of ancient literature’s title, “the Holy Book.”

Here  I am: an apologist quite willing to engage in conversation. It takes two. So we’ll see if Steven is willing to follow through on his stated desire. I have had my own long history (in almost 40 years of apologetics) of “difficult, nay impossible” attempts to discuss matters with many people who tend to be of a few particular belief-systems, though I have no problem talking with anyone who is civil and can stick to a topic. I don’t just say this, I have a demonstrable record of doing it, which is evident on my blog, with its 1000+ dialogues. But as I said, dialogue takes two, and I would add that it also requires a degree of at least minimal mutual respect. Steven’s words will be in blue.

The fundamental reply to this is what I have stated in my second of now four replies to Steven’s reasoning:

I think his fundamental fallacy, spread throughout these articles and many others, is thinking in “either/or” (hyper-rationalistic) terms, as opposed to the “both/and” outlook, which typifies the biblical and ancient Hebrew outlook. We shall see how this is a wrong path and frequent source of confusion in his arguments, and indeed, massively in scores of arguments about alleged biblical contradictions from all sorts of biblical skeptics (I’ve refuted these errors in particulars scores of times, myself).

Steven, playing his usual documentary theory game, attempts to argue that there are contradictory motifs in Scripture: God present in heaven and God present in His temple:

One or the central and most important theological tenets of the Priestly theocracy was that Yahweh dwelt among the people, tented in the Tabernacle which was at the center of their camp. . . .

For the Deuteronomist, Yahweh dwelt in heaven. To preserve the holiness of the Temple dwelling, the Deuteronomist claimed that merely Yahweh’s name resided there, not his glory nor presence as the Priestly writer: “the place that Yahweh, your god, will choose to tent his name.”

In fact, both things are true. It’s the biblical “both/and.” The Old Testament taught that God was omnipresent (everywhere):

At the same time, the Bible says that God dwells in heaven and also on the earth:

Deuteronomy  4:39 the LORD is God in heaven above and on the earth beneath; there is no other.

1 Samuel 2:10 The adversaries of the LORD shall be broken to pieces; against them he will thunder in heaven. . . .

That said, the Bible also talks about God being specially present: in the burning bush, more generally on Mt. Sinai, in the pillars of fire and smoke, between the wings of the cherubim on top of the ark of the covenant, in the temple and prior tabernacle, by means of the angel of the Lord and in the consecrated Eucharist and the indwelling of the Holy Spirit, in Christian belief. It’s not a contradiction because God is everywhere in the first place; therefore He can (non-contradictorily) be said to be in any particular place as well, and He can teach His people that He chooses to be “specially” present in certain places for the purpose of worship and His people feeling closer to Him. See my papers:

Bible On God’s Special Presence Prior to the Incarnation [2011]

Thus, He can be said to be specially present in His tabernacle and temple:

Exodus 25:8 And let them make me a sanctuary, that I may dwell in their midst.

Deuteronomy 12:11 then to the place which the LORD your God will choose, to make his name dwell there, thither you shall bring all that I command you: your burnt offerings and your sacrifices, your tithes and the offering that you present, and all your votive offerings which you vow to the LORD.

The last four passages are those that Steven presents as supposedly being contradictory to each other. Supposedly the so-called “Deuteronomist” taught that God dwelt only in heaven, and that His “name” dwelling in the temple is essentially different and lesser than what is described in Exodus 25:8 and 29:42-43. But Steven apparently has no comprehension of what God’s “name” meant to the ancient Jews: it’s a far more robust concept than a mere minimalistic abstract thing. According to the International Standard Bible Encyclopedia (“Name”):

Steven, then, completely misses all this. He tries to make a distinction and contradiction where there is none. If God’s “name” dwells in the temple, He Himself is specially present there. This is what the Bible teaches.

Moreover, Deuteronomy, too, teaches that God was not confined to heaven, but also specially present in the burning bush, Mt. Sinai, the pillars of fire and cloud, the tabernacle and/or temple, the ark of the covenant, the Israelite’s “camp”, and that He was “with” them in battles:

Deuteronomy 4:36 Out of heaven he let you hear his voice, that he might discipline you; and on earth he let you see his great fire, and you heard his words out of the midst of the fire.

Deuteronomy 5:4 The LORD spoke with you face to face at the mountain, out of the midst of the fire,

Deuteronomy 9:10 And the LORD gave me the two tables of stone written with the finger of God; and on them were all the words which the LORD had spoken with you on the mountain out of the midst of the fire on the day of the assembly.

Deuteronomy 10:8 At that time the LORD set apart the tribe of Levi to carry the ark of the covenant of the LORD, to stand before the LORD to minister to him and to bless in his name, to this day.

Deuteronomy 20:1 “When you go forth to war against your enemies, and see horses and chariots and an army larger than your own, you shall not be afraid of them; for the LORD your God is with you, who brought you up out of the land of Egypt.

Deuteronomy 20:4 for the LORD your God is he that goes with you, to fight for you against your enemies, to give you the victory.’

Deuteronomy 23:14  Because the LORD your God walks in the midst of your camp, to save you and to give up your enemies before you, therefore your camp must be holy, that he may not see anything indecent among you, and turn away from you.

Deuteronomy 31:6 Be strong and of good courage, do not fear or be in dread of them: for it is the LORD your God who goes with you; he will not fail you or forsake you.”

Deuteronomy 31:8 It is the LORD who goes before you; he will be with you, he will not fail you or forsake you; do not fear or be dismayed.”

Deuteronomy 31:14 And the LORD said to Moses, “Behold, the days approach when you must die; call Joshua, and present yourselves in the tent of meeting, that I may commission him.” . . .

All of this is utterly contrary to Steven’s nonsense: “the Deuteronomists would have vehemently disagreed with the Priestly writer’s ideology that Yahweh dwelt among the people. For the Deuteronomist, Yahweh dwelt in heaven. To preserve the holiness of the Temple dwelling, the Deuteronomist claimed that merely Yahweh’s name resided there, not his glory nor presence . . .”

He is forced now to say, “well, those are simply non-Deuteronomist portions later added to the book of Deuteronomy . . .” It’s the “answer” to everything (hostile or contrary interpolated texts). But when a particular ploy or theory or fiction is used for every conceivable difficulty, it is soon seen that it is in fact the solution of no difficulty. A thing can explain too much as well as too little. It’s just not plausible. It’s on the level of a conspiracy theory. In this case, it’s in effect the conspiracy theory against the inspiration and infallibility of the Holy Bible: God’s revelation to man.

It is instructive to imagine the Priestly writer’s worldview: Yahweh dwells among the people. Furthermore, his presence sat in the inner shrine, the Holy of Holies above the golden cherubim (Ex 25:22). Thus for the Priestly writer the whole space was a sacred space, and as such demanded strict holiness.

Yeah, and it is the same for the so-called “Deuteronomist”: as just massively shown. Elsewhere, Steven refers to “the Levite-led scribes who wrote the book of Deuteronomy.” And in his article, “The Deuteronomist,” Steve opines:

He goes on to posit many more supposed divergences from other parts of the Torah / Pentateuch, but it just won’t do. We have now seen how his claims regarding Deuteronomy are massively refuted in all the texts I provided not far above.

November 24, 2020 Seidensticker Folly #63: Answer Comfort But Never Armstrong?
Recent Comments
0 | Leave a Comment
"Luke18:15 - Now they were bringing EVEN INFANTS to him that he might touch them; ..."
MurphsLaw What Were the Baptized “Added” to? ..."
"I have not bothered to read Bob in a while now. I kind of threw ..."
Jim Dailey Seidensticker Folly #74: Omniscient God & ..."
"Its funny that the least agreed upon document (On Media) is among the least 'controversial' ..."
Prasanth Vatican II: Documentation of Bishops’ Voting ..."
"It seems to me that Karl Keating is what you would call a 'mild critic' ..."
Prasanth Pope Francis Talks of Gospel Freedom; ..."
Browse Our Archives
get the latest updates from
Biblical Evidence for Catholicism
and the Patheos
Catholic
Channel
POPULAR AT PATHEOS Catholic
1