Resurrection #29: Supposed Absence of the Ascension 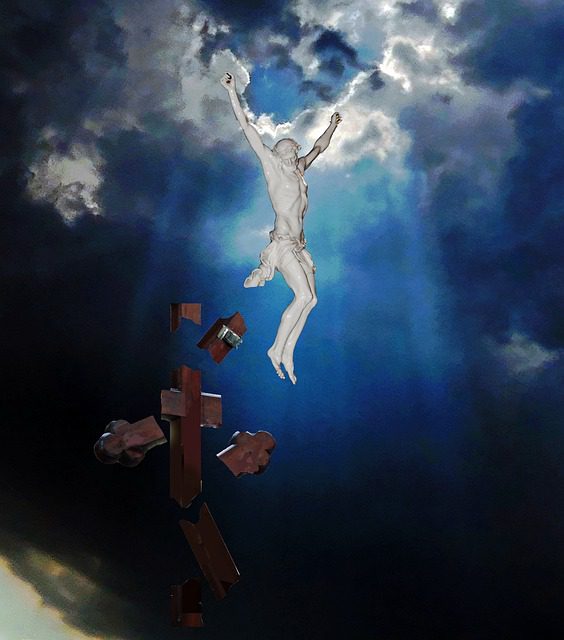 There is no explicit account of the Ascension in the oldest Christian sources: the writings of Paul. (p. 701)

Alter will likely appeal to his use of the disclaimer “explicit” but there is at least some sort of mention in Paul:

This is reminiscent of what was written about God in the Hebrew Bible:

Proverbs 30:4-5 Who has ascended to heaven and come down? Who has gathered the wind in his fists? Who has wrapped up the waters in a garment? Who has established all the ends of the earth? What is his name, and what is his son’s name? Surely you know! [5] Every word of God proves true; he is a shield to those who take refuge in him.

Paul’s words in Ephesians are arguably at least as “explicit” as the Gospel of Luke, which simply says that He “was carried up into heaven” (24:51) and Luke’s description in Acts: “he was lifted up, and a cloud took him out of their sight” (1:9).

Matthew (see chapter 28), who church tradition declares to have been an apostle and a witness of Jesus’s ascension, failed to report this event. (p. 702)

. . . which is not, of course, a “contradiction.” Marco Polo never mentioned the Great Wall of China. Using the usual hyper-critical, irrational methodology applied to the Bible, this would prove that the Great Wall doesn’t exist, or that Marco Polo never visited China. Christians say that not every book has to have everything about the Christian faith in it. What we needed to know and believe, God saw fit to include somewhere in the New Testament. Other things are also found only or primarily in oral tradition (just as with mainstream pharisaic and rabbinical Judaism).

John, the author of the last gospel, a person who church tradition declared to have been an apostle and a witness of Jesus’s ascension, also did not report this event. (p. 702)

In fact he does mention it, three times:

John 3:13 No one has ascended into heaven but he who descended from heaven, the Son of man.

John 6:62 Then what if you were to see the Son of man ascending where he was before?

John 20:17 Jesus said to her, “Do not hold me, for I have not yet ascended to the Father; but go to my brethren and say to them, I am ascending to my Father and your Father, to my God and your God.”

Only Luke provided an exclusive description of Jesus’s ascension, although here there is much to doubt regarding the authenticity of this narrative. (p. 702)

This is false, as just shown. And as usual, Alter is skeptical of a text that he doesn’t personally care for, while rarely if  ever presenting hard evidence that all these passages he claims aren’t authentic, or are contrived, made up, etc.

ADDENDUM: Clarifying Note on My Methodology

With this reply I have concluded my critique of Michael Alter’s book. In closing I want to clarify one thing about my methodology throughout. Alter made a comment in one of my comboxes, but seems not to have read my response. Here is the main part of my counter-reply (with his words in green):

You imply that I am being deliberately disingenuous again in this reply:

Unfortunately, Dave has deliberately decided not to inform his readers about SPECULATION #144 Reasons for Judas’s Betrayal (pp. 453-455). The Resurrection: A Critical Inquiry offers eight speculations plus seven more from Fr. Raymond Brown. Therefore, fifteen speculations are shown to the reader. . . . Question for Dave, are fifteen speculations sufficient . . .?

You appear to have missed the method I have been employing throughout my replies. I laid it out very clearly from the beginning (no secrets or mysteries here!): I would respond to accusations of contradictions in the NT, and do all I could to show that they are unfounded. This was quite obvious in my first “59 Replies” paper and throughout my current replies. I look through your book specifically to find instances of where you allege a contradiction. I utilize the same exact methodology in my replies to atheists when they, too, suggest “contradictions” in the Bible (and yes, I have defended your — and my — Hebrew Bible many many times, too, along with the New Testament).

I do this not only based on my methodology of “defeating the defeaters” but also because I figured that if I started tackling your many “Speculations” and “Issues” [titles of sections] that you would very likely come back and say, “well, hey, I was only speculating, as I said!” Therefore, I have stuck to the sections in your book that have “Contradictions” in the title of the subsections. You can’t deny that you are asserting contradictions in those portions.

Because of this I didn’t read the section you reference in the first place.

Here is what I wrote in my first installment, making it clear that I would be focusing on specific allegations of NT contradictions, as opposed to his entire book:

You’ll soon discover that I have particular interests and am uninterested in other things. That will be true with regard to your book. I am primarily interested in demonstrating that alleged NT contradictions really aren’t so, or “defeating the defeaters”: as Protestant philosopher Alvin Plantinga likes to say. The idea is to question whether internal contradictions are present, and to refute each one that is alleged. That’s what I did so far in my 59 replies to your book: based on what I could read of it. So you already see what I will mostly be doing as I proceed.

It’s a “negative” sort of evidence for NT trustworthiness and internal consistency and cohesion. It doesn’t prove inspiration, but it is consistent with it; that is, inspired revelation would not and could not contain real contradictions. And it’s an objective enterprise: one of logic. . . .
This will give you an idea of how I approach these things, and where my main interest in your book lies. I will still have a lot to respond to, because you allege many contradictions.

I would like to thank Mike Alter again for the opportunity to make all these critiques (made possible because he sent me a PDF file of his book) and to amiably discuss them with him. It’s been an enjoyable and intellectually stimulating challenge, and I learned a lot, as I always do whenever I set out to study and/or defend the Bible. As usual, we don’t seem to have changed each other’s mind about anything major, but it’s still nevertheless worthwhile to engage on these topics if only to understand other viewpoints better and to entertain sincere and honest objections to our own. Communication is always good. We both agree to let readers make the final judgment regarding our efforts.

I wish him all the best in life and pray that God showers him with blessings.

Summary: Michael Alter argued for a supposed absence of the Ascension in St. Paul (not explicitly); then claimed that the Gospel of John didn’t mention it, either. I prove the falsity of both contentions.