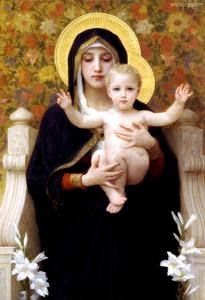 I think a lot of the objection is sheer overreaction against Catholicism and a manifestation of the disdain for the mistaken view that we worship Mary or at the very least place her much higher than she should be (far beyond what Scripture teaches: so they argue).
*
So they think it’s merely a “Catholic thing” and enter any discussion about it with that emotional objection and “baggage” or strong predisposition before even considering the many solid and serious exegetical arguments that we can bring to the table.
*
The other influence, I believe, is the Protestant and secularist notion that Catholics are supposedly obsessively “against sex” and so of necessity had to make Mary into a perpetual virgin (i.e., make up the whole doctrine).
*
In fact, it has nothing to do with sex at all. We believe it was God’s will and “fitting” in order to protect the doctrines of the virgin birth and the uniqueness of Christ; His status as the incarnate God-Man; God in the flesh.
*
As with the Rosary, title of Theotokos (Mother of God), her Immaculate Conception, and anything and everything else related to the Blessed Virgin Mary in biblical and Catholic Mariology, it’s all about Jesus, not Mary. She is the humble and perfectly willing handmaiden of the Lord. That’s what so many of these critics don’t get.
*
Part of the dogma is that the birth of Jesus was miraculous: not just in how He was conceived, but in the actual birth itself. It was completely miraculous; not a natural birth (though the usual biological aspects of a nine-month pregnancy were natural).
*
This is what is known as the in partu virginity, or Mary’s virginity during the birth. She remained intact. And yes, this is Catholic dogmatic teaching (de fide dogma: the highest level of infallibility), and even Luther agreed with this aspect. Mary was, thus, a virgin before, during and after Jesus’ birth (or, ever virgin). The classical, physical definition of a virgin is in play here; not merely the absence of sexual activity.
*
So if she had had other children in the natural way, skeptics would simply doubt the miraculous nature of Jesus’ birth. This is one reason, I believe, that God willed Mary’s in partu virginity and Jesus as an only child and Mary as a perpetual virgin.
*
It’s altogether “fitting” (as the Church believes) that the Mother of God [the Son] should not have other children. One either immediately grasps that or they do not. Mary’s womb was “holy ground” and it wasn’t appropriate for any created human being to be there, when God had already occupied it. It was the human “holy of holies” so to speak. Mary was the ark of the new covenant.
*
But it’s not just a “Catholic thing”, since the Orthodox agree with it, as did all of the original leaders of the Protestant Revolt. It’s theological liberalism that worked against its belief, not traditional Protestantism. But few know that history. It’s important to know.
*
See scores and scores of related articles on my Blessed Virgin Mary web page.

Summary: My theory as to why Protestants reject Mary’s perpetual virginity: they think Catholics are “anti-sex” and elevate Mary higher than they think the Bible would justify. 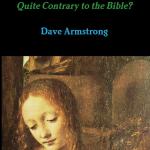 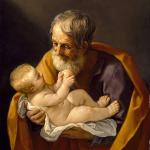 September 5, 2022 Virgin Mary "Until"? (Matthew 1:25) (vs. Lucas Banzoli)
Recent Comments
0 | Leave a Comment
"See articles critiquing on Calvinist distinctives on my Calvinism web page:https://www.patheos.com/blo..."
Dave Armstrong Defense of Immortal, Conscious Souls (vs. ..."
"Hello, Dave!I have a long, confusing and somewhat shameful request. This is not about the ..."
~🌑GADO DA DARKNESS🌑~ Defense of Immortal, Conscious Souls (vs. ..."
"So that's the game you play to rationalize away Christian charity? Nice try, but no ..."
Dave Armstrong Secularist, Atheist Nations = More “Happy” ..."
"Seems silly to be responding to a one-year old thread, but here goes: How much ..."
David Peebles Secularist, Atheist Nations = More “Happy” ..."
Browse Our Archives
Related posts from Biblical Evidence for Catholicism