The Anxious Bench Year in Review: 2017

I don’t know about you, but I’m more than ready to turn the page on this particular year. Still, for all its trials and tribulations, 2017 brought some measure of joy as well. And few things gave me more consistent pleasure than this blog: both as a reader myself, and as a contributor and administrator.

So as I come to the end of my first full calendar year as blogmeister at The Anxious Bench, let me share our top 25 most-read posts, organized around some recurring themes:

“The relevance of religious history for today”

I’ve always been of two minds about this blog’s tag line. But while I believe there’s more value to our discipline than its contemporary relevance, I am glad that we regularly used current events as jumping-off points for historical and theological reflection. The clashes in Charlottesville, Virginia led David to discuss Christian nonviolence (#1 most-read post — and, given the centrality of a Confederate monument to the events in Charlottesville, let me also re-recommend Agnes’ post on historical commemoration). Listening to Donald Trump’s inaugural address while I was teaching students in Munich, Germany led me to explain why I couldn’t pledge “total allegiance” to this nation (#2). The first year of that presidency also led Kristin to argue that both major parties face a “religion problem” (#7).

We’re always happy to have guest-bloggers add their distinctive voices to our conversation, and several drew especially surprising, helpful connections between history and current events. For example, Jason Rhodes Showalter identified unlikely parallels between his Mennonite grandmother and quarterback-activist Colin Kaepernick (#8), and Rusty Hawkins responded to the nomination of Betsy DeVos as secretary of education by sharing the complicated history of school choice (#10).

In a year when every pollster, pundit, and pastor had something to say about evangelicalism, I was grateful to see Anxious Bench contributors write both critically and thoughtfully about that topic. In the 500th anniversary of Luther’s 95 Theses, Beth reflected on the “Reformation irony” of evangelical silence on the subject of Donald Trump (#6). (Oddly, no #Reformation500 post cracked our top 25, though that may not surprise Tal — given his October 31 post on historical amnesia…)  I disputed the idea that evangelical colleges and universities faced a “cultural Waterloo” over the issue of sexuality (#9). Kristin looked back at a Reagan-era search for “Christian America” (#22). Here too, we had some terrific guest posts: John Wigger shared a preview of his acclaimed history of Jim Bakker and the PTL Club (#4 — reviewed this month by John); and George Marsden (#13) and Tim Gloege (#16) considered the future of “evangelicalism” — as a category for scholarship and a religious movement.

I was especially encouraged to see us tackle more often the topic of women within evangelicalism. For example, Beth asked how women were treated in the Christian academy (#18), and Kristin considered the significance of the #MeToo movement for the Church (#12) and whether complementarian theology was abusive (#23).

In this vein, see also Kristin’s list of ten things Christians get wrong about feminism (#5). I don’t think you’ll see all that many “listicles” at this blog, but occasionally, such posts do help us survey a big topic in relatively few words. So David summarized four reasons for John Wesley’s opposition to the American Revolution (#15), and I picked seven women who shaped Christianity in the West (#17) and five reasons why Christians should study history (#19).

One of my favorite things about Anxious Bench is that its contributors have far too many interests and passions to allow for easy categorization. I’m not sure, for example, where to put Kristin’s declaration of war on clutter (#21).

But it’s probably not a surprise that Philip and I have the most eclectic sets of posts in the year’s top 25, given that we’re instinctive generalists faced with the challenge of writing at least one Anxious Bench post every week. Two of Philip’s most popular posts looked back to the Early Church, as he asked just how many Christians there were in the year AD 200 (#11) and when “priesthood” became a part of the Church (#24). But my favorite post of his integrated personal genealogy with the history of the Vikings (#25).

Then we’ll finish with a motley crew of posts that gave me excuses to research topics on which I’m less an expert than an interested amateur: the relationship between Queen Elizabeth II and Billy Graham (#3), the origins of Vacation Bible School (#14), and the religious history of America’s national anthem (#20).

Whatever posts brought you here in 2017, thanks for reading! We’ll look forward to welcoming you back to the Bench in 2018. 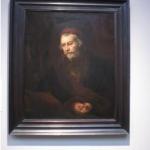 December 27, 2017
It is Time to Stop Using Paul Against Women: A New Year's Resolution for Christians
Next Post