“Once Saved, Always Saved” / Eternal Security: Is it Biblical? 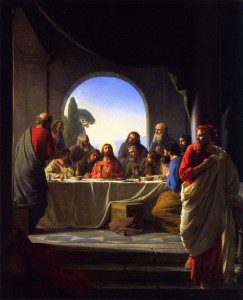 Judas was chosen by Jesus as a disciple and is described in the Bible as “elect” [see link]; yet he fell away.  The Last Supper, by Carl Heinrich Bloch, late 19th century [public domain / Wikimedia Commons]

Words of Catholic apologist Tim Staples (from Catholic Answers) will be in blue. Words of noted Catholic film critic Steven D. Greydanus will be in green.

A friend of mine, who seems to be perpetually in limbo between Catholicism and Protestantism, cited Catholic apologist Tim Staples on his (public) Facebook page:

The doctrine of once saved always saved is directly responsible for many that will be in Hell.

He then opined that this was “twisted logic” and that  “the abuse of a teaching does not negate it authenticity.”

That was enough to quickly get my attention! I wrote:

Makes perfect sense to me. If people delude themselves into thinking that they are “secure” for heaven, no matter what, yet remain in serious, mortal sin, then the lie has a direct impact on whether they wind up in hell, because it gives sanction to sins by which they lose entry into heaven.

Anyone who takes seriously the doctrine of eternal security knows that if they obstinately persist in grave sin without repenting, they are presumptively among the reprobate, not the elect. Regeneration necessarily brings about the fruits of the divine life; a good tree necessarily produces good fruit. Grace is irresistible; there cannot be no connection between the grace of justification and the way one lives.

Sure, that is the sophisticated Calvin-Luther version. What I was opposing was an antinomianism that flows from the doctrine. Granted, it (at least the classic “magisterial Reformation” version) does have to be misunderstood in order to be applied in that way. But the doctrine is only as good as how it is taught locally, and that is often in a way that Luther and Calvin both would have opposed and detested.

Okay. My experience as a Protestant was the traditional Calvin–Luther version, but yeah, I can see where a degenerate kind of presumptuous, antinomian complacency could come out of that.

I don’t think this is so much a degenerate kind of presumption. This flows from the doctrine that says what you do does not affect your state of justice before God. It says, “If I continue to commit this sin over and over (you fill in the hole here for how many times you have to do this before you can say you weren’t saved to begin with),” then perhaps I wasn’t saved to begin with. The tendency is to say the “other guy” was never saved. “I’m just backsliding!” False doctrine is never a good thing.

The thing itself (OSAS) is untrue. No one is eternally secure in the sense that they know for sure that they will be saved; simply because they can’t know the future with absolute certainty. God knows Who is saved, but that’s cuz He’s God and we’re not, which is the whole point. Calvin stressed this when he taught that no one could know if another person was one of the elect.Luther and Calvin accompany the untruth with the truth that a genuine faith produces good works, and that lacking these result in folks legitimately questioning regeneration and election. But that doesn’t make the initial false premise true, because it is surrounded with good, Catholic truths.And because it is fundamentally false, it has bad fruits, which Luther and Calvin both condemned in practice (antinomianism). But as usual, they didn’t see that the false elements in their soteriology (just as in their rule of faith, sola Scriptura) led to further, far more serious errors.The Catholic looks at the same scriptural data and sees that it is patently obvious that 1) true believers can fall away, and 2) a moral assurance of salvation is the most we can attain, and that is contingent upon a lack of mortal sin and doing many good works that exhibit genuine faith.This is why we refuse to separate faith and works in the matter of salvation, as Protestants attempt to do, because it has bad fruit and often leads to antinomianism and what Bonhoeffer called “cheap grace.”

“Once saved, always saved” (or what is also often called “eternal security”) is heresy, according to Catholicism, the majority of Protestant traditions, Orthodoxy, and many biblical statements, especially from Paul.

Catholics can possess a very strong  moral assurance that we will attain heaven in the end, but we reject an absolute certainty of same, because we see the salvation process as a lifelong one, involving vigilance and perseverance. We don’t take anything for granted, because we know it is possible to fall away from justification and salvation.

On the other hand, it is a myth to think that a serious, committed catholic is in a perpetual state of “eternal insecurity”: worrying about losing salvation and the state of grace and going to hell, on odd-numbered days, or days when the barometer falls under 30. Speaking for myself, this has not been my experience at all. I feel every bit as “secure” that I can and will, by God’s grace, make it to heaven when I die, as I did as a Protestant Arminian evangelical. In those days I was very close to eternal security: thinking that the only way to lose salvation would be to directly renounce Jesus Christ, or to commit the unforgivable sin (basically the same thing).

I don’t sit around worrying about it at all, really. I do my work that called me to (apologetics and evangelism), try to be the best husband, father, friend, and disciple of Jesus that I can be (all by God’s enabling grace), and I have total faith in God and trust that His grace will lead me home, provided that I don’t spurn it (irresistible grace being a false doctrine, too).

Further reading: My book, Biblical Catholic Salvation (available for as low as $1.99) devotes seven chapters and 115 pages to an extensive critique of all five tenets of the Calvinist “TULIP”. 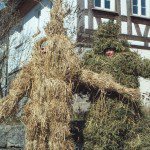 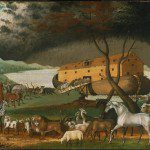 August 18, 2015 Noah's Flood and Catholicism: Important Basic Facts
Recent Comments
0 | Leave a Comment
"Looking forward to it! If you're doing it as another full article, I'd appreciate being ..."
axelbeingcivil Problem of Evil & of Good: ..."
"Thanks. My reply will be posted tomorrow (Friday) before noon, eastern standard time."
Dave Armstrong Problem of Evil & of Good: ..."
"While the National Guard satisfies the letter of the Constitution, I sometimes wonder if it ..."
Kyllein MacKellerann " 2nd Amendment & Assault Weapons: a ..."
"I think the Church has been too conciliatory. It's gone so far in that direction ..."
Dave Armstrong Cowardly (?) Bishops, Pro-Abort Biden, & ..."
Browse Our Archives
get the latest from
Biblical Evidence for Catholicism
Sign up for our newsletter
POPULAR AT PATHEOS Catholic
1