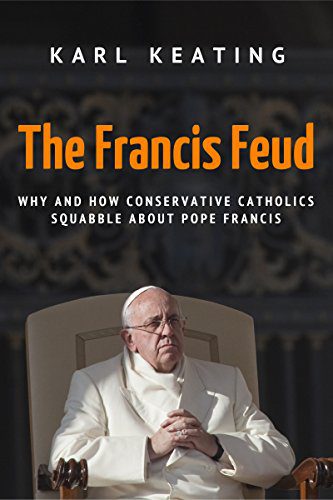 There is a long back story here. I don’t want to bore readers with it, but briefly: Catholic apologist Karl Keating and I have disagreed from the outset as regards Phil Lawler’s book, Lost Shepherd (that is highly critical of Pope Francis). I first wrote about it almost exactly a year ago. Karl didn’t like that at all and I dialogued about it with both him and Phil and then with Karl alone.

In January 2018 I wrote five lengthy critiques of Lawler’s book, which I read from cover-to-cover (one / two / three / four / five): condensed into an eventual one-star Amazon review. I wrote several more times about the book through March 2018, and once in April. Karl later wrote that I was “monomaniacal about Lawler”: an absurdly exaggerated charge to which I responded on Facebook in July 2018.

In May or June 2018 I found out that Karl had mentioned me some 99 times in his book, The Francis Feud (without having informed me beforehand) and so (as one might expect) I wrote exactly one blog article in response to that on 6-2-18. He had cited me mostly or solely with regard to Lawler’s book, since I seem to have been the most vociferous critic of it.

I’ve been a friend or at least acquaintance of Karl since 1990 when I wrote to him during my time of considering Catholic conversion. He was kind and gracious enough to write a long letter back to me, and it considerably helped me. This background needs to be understood in order to fully understand the present apparent “feud” between Karl and I.

And my deep respect for him and for Catholic Answers also needs to be emphasized in this situation. As I wrote in my blog critique of his book:

Karl Keating (whom I have greatly admired for 28 years and always call “the father of modern Catholic apologetics”) . . .

Karl has also said very nice things about my work (e.g., “He’s done much good for thousands of people”; “You’ve done yeoman work over the decades”), wanted to hire me to work for Catholic Answers in 2011 (he asked me in person at their office; I declined because we were taking care of my elderly mother in Michigan), even raised money for me in 2013, and published one of my books with Catholic Answers. I’ve been published in Catholic Answers Magazine [starting in 1993] seven times [one / two / three / four / five / six / seven], and have appeared on Catholic Answers Live twice [listen here: one / two].

I’ve also defended Catholic Answers many times when it was attacked: including when Michael Voris went after Keating because of [what Voris thought was excessive CA salaries] . . .

Moreover, in my blog review and to some extent in the deleted Amazon review (as limited space allowed), I acknowledged that Karl was fair to me in a broad sense in his book:

Although I could easily disagree with a hundred little things (I have neither time nor desire to do that), he did take pains to try to present my positions fairly and to cite me at great length and provide links, if readers seek more context. That’s way more than almost all dialogical opponents of mine (in cases of substantial disagreement) do.

I was not disrespectful of Karl in either piece, either. I profoundly disagreed with him. It’s two different things. It also should be known by readers that I wrote a very positive, 5-star Amazon review of Karl’s book on geocentrism in February 2015 and posted it on the first day of publication (at Karl’s request).

And what bothered him was not so much the negative review itself (so he explained), but rather, my statement in my blog article that “I bought the book last night and was able to heavily skim the (considerable) parts devoted to me, . . .” That is: he was very offended by the fact that I hadn’t read the entire book before giving it a one star rating and putting up the review on the first day.

In the same Facebook thread I conceded that this was “wrong” on my part, and in order to rectify it, I went and upped the rating to three stars, changed the title, and modified half of one sentence that I thought was excessive. I am not aware of any reply to that. The last time I saw the intact thread it was unanswered. Then when I went back it was removed by the person (not Karl) who runs the page (I perfectly understand why and have no problem with that).

A few days ago I decided to go even further, and completely remove my Amazon review, while retaining my much more in-depth critical blog review (to which Karl has never replied at all), because I haven’t changed my mind at all about any of the actual substance: and because there are two sides to every story, and they should be heard for the sake of the fuller, more complete story: the “whole” truth.

Catholics, like all Christians, believe in forgiving someone who repents of wrongdoing and seeks forgiveness. I hope Karl extends that to me, because it’s the right thing to do, just as I conceded that he had a certain point about the review, which I acknowledged and thus changed it and eventually removed it.

I did the same thing a while back when Karl was offended by my passing remark in writing, that he was “taken in” by certain critical-of-the-pope reasoning. He asked me to remove that description because he thought it made him look bad. I was happy to do so. I then asked him in return to remove his description of some of my replies to Phil Lawler as “half-cocked” and he refused. Here is Karl’s full statement in context, in our first dialogue regarding Lawler’s book:

I’m quite disappointed at the way you have been handling this. You have let it appear that there is a personal element involved (as with your book), but mostly you have gone off half-cocked, have done a good man a bad turn, and have gotten not a few things just plain wrong.

You seem too wrapped up in the controversy personally. I suggest you move on to something else. Please take down the tendentious commentary, give private thought to what you have written, and send Phil an apology.

Readers may see how I responded, in the linked dialogue. But it was no more “personal” with Phil than it was with Karl, as I explained in the same dialogue: responding specifically to Phil:

Thanks for replying and for the generous offer to send me your book, which you know I will likely be critical of. Thank you. Let me assure you, first of all, that none of this is personal. I have admired your work for a long time and often linked to your articles and others at Catholic Culture. And I know that you guys have always positively reviewed my website in your ratings of sites. I have another apologist friend who cares little for Pope Francis, yet we remain best of friends. For me, disagreements are no reason to end a friendship.

But know that it is precisely out of existing profound respect for folks like you and Karl, that I am all the more distressed to see the positions you have arrived at, which I deeply, sincerely believe are erroneous.

I understand that Karl was extremely offended. To explain a bit: the main reason I didn’t read his entire book was that, frankly, I wasn’t that interested in it. I had been defending Pope Francis for five years, basically decided to stop writing about Pope Francis in April 2018 (as a matter of prudential time-management, since I have to write about many topics, as an apologist) and only made an exception because I was mentioned 99 times in Keating’s book.

To read the book at that particular time would feel (subjectively) something like how it would be to drink Lake Erie after having already swallowed Lake Huron (to use some Michigan references). But obviously, I have a “right” to present my side of things.  My main interest was (understandably) the portion where my name was repeatedly mentioned. I assumed that Karl’s arguments were basically the same ones he had presented to me in our own discussions. He cited my statements from those dialogues.

That said (in explanation, but not excuse), I now think it was wrong to post such a one-star review, not having read the whole book: even though I highly doubt that my opinion would change if I read the whole thing, because I had been so involved in all these “feuds” regarding Pope Francis for five years, including with Karl and Phil Lawler. I’ve also written negative blog reviews about contra-Francis books from Ross Douthat (again dialoguing and disagreeing with Karl) and Henry Sire: books besides Lawler’s book that were discussed in The Francis Feud.

I am acknowledging my share of the blame for whatever bad feelings exist, and have done all I can do to make it better: apologize and remove the review: that is, modify the thing that Karl has specifically said offended him. I’m his friend, and sometimes friends have honest and sincere disagreements, and sometimes, of course, they mess up, being imperfect, as we all are. Friends also fight at times, and the Bible states, famously, that “faithful are the wounds of a friend”.

I’ve done all I can do to make this situation better. If Karl has any other beef with me, I’m more than willing to hear about that (or those), too, and to do whatever I can to alleviate and resolve any unnecessary conflict. That’s what I try to do with anyone and everyone, and in my opinion it’s something all Christians are called to do.

Photo credit: Amazon photo of the cover of the book, The Francis Feud (published by Rasselas House, 5-12-18), on the book’s purchase page. 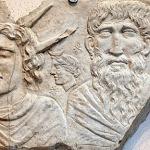 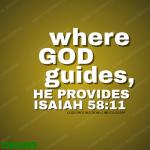 December 24, 2018 The Relationship of Full-Time Ministry and Business
Recent Comments
0 | Leave a Comment
Browse Our Archives
Related posts from Biblical Evidence for Catholicism