Can Communion in the Hand be Equally Reverent?

Can Communion in the Hand be Equally Reverent? November 20, 2019 Dave Armstrong 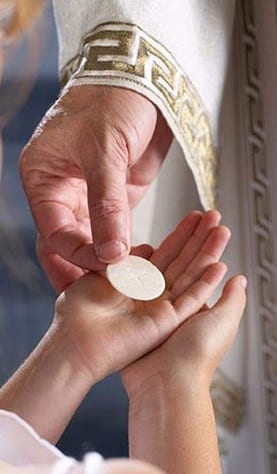 The following was compiled from my comments in a recent Facebook thread. I started it off with this quotation:

That, in the early Church, the faithful stood when receiving into their hands the consecrated particle can hardly be questioned. . . . St. Dionysius of Alexandria, writing to one of the popes of his time, speaks emphatically of “one who has stood by the table and has extended his hand to receive the Holy Food” (Eusebius, Hist. Eccl., VII, ix). (Catholic Encyclopedia, 1911, “Genuflexion”)

I think reverence is the overwhelming factor. At my parish almost all receive kneeling at an altar rail, on the tongue, and always from a priest or on occasion a deacon. But I am not legalistic about method because I know Church history and I know of Eastern Catholicism. There are many reasons why reverence is sometimes lacking; not just posture.

In the final analysis, only God knows how reverent or pious a person truly is, because God looks at the heart and motive, and we usually cannot determine that. If a person is laughing or joking around or clearly negligent with the Lord’s Body, that is one thing, but usually people judge based on mere external things or impressions.

Most of the world does stand during consecration. Kneeling is not now and has not historically been anywhere near universal. I agree that it is a reverent position, because of bowing and kneeling before, etc., in the Bible and in many cultures, but standing is not irreverent in and of itself.
*

We kneel in the West (or at least the US) during consecration because that is the tradition here (and I think the rubrics, if I am not mistaken).

Certainly we can’t say that Eastern Catholics are irreverent simply because they are standing during consecration and receiving our Lord in Holy Communion. Many have sought liturgical reverence and integrity in Eastern Catholicism because they had a hard time finding it in the Latin Rite, where they lived.

My own opinion is that, in our culture at this time, kneeling for communion does foster reverence (including in children). I love doing it at my church. It is a wonderful time, waiting at the rail, taking in the beauty of the altar at my church. But I can’t make any kind of universal statement as to receiving standing. The whole thing is too specific to person and culture and particular liturgical traditions, I think.
* * *

If there are 22 rites in the Catholic Church, then there are 21 besides the Latin, and many if not most of those stand; also the Orthodox. That’s what I meant. Kneeling is mostly a Latin (and also American) tradition. In any event, we can’t be dogmatic about posture in this way, given the current allowed diversity. So why discuss it? If someone wants to kneel (as I do), they can choose a church / rite where that is the norm.

I think reverence does differ to some extent according to culture and past history. That’s why I agreed that kneeling is probably best in the west, while trying to avoid legalistic and judgmental statements about other practices.

Some contact is eventually made with our bodies: either hand plus mouth or mouth only. What’s the difference? Reverence is a heart matter, not a parts of the body concern.

* * *
‎There is a smaller percentage of Catholics who believe in the real presence today than before this practice was allowed.

*
You assume that there is a one-to-one causal relationship between the two things, which is, of course, a highly dubious notion and impossible to prove.

Personally, I think many of the dogmatic-type, “either/or” arguments on liturgical matters come primarily from emotionalism and association (as a result of personal practice and experience), rather than from logic, canon law, and Church history. People instinctively don’t “like” a certain practice: they have a gut reaction to it, or they associate it with pure, unmixed liberalism and laxity and nominalism. That in turn drives the opposition (if my speculation is correct).

We should probably be more concerned w/how we’re treating Christ in our daily lives, than our reverence, piety and posturing in front of the other sheep.

Posture and “posturing” are two different things. :-) Nice play on words, though . . .

* * *
Pope Benedict XVI has expressed a position on this virtually identical to mine above (it’s nice to agree with him!):
*
I am not opposed in principle to Communion in the hand; I have both administered and received Communion in this way myself. The idea behind my current practice of having people kneel to receive Communion on the tongue was to send a signal and to underscore the Real Presence with an exclamation point. One important reason is that there is a great danger of superficiality precisely in the kinds of Mass events we hold at St. Peter’s, both in the Basilica and in the Square. I have heard of people who, after receiving Communion, stick the Host in their wallet to take home as a kind of souvenir.
*

In this context, where people think that everyone is just automatically supposed to receive Communion—everyone else is going up, so I will, too—I wanted to send a clear signal. I wanted it to be clear: something quite special is going on here! He is here, the One before Whom we fall on our knees! Pay attention! This is not just some social ritual in which we can take part if we want to. 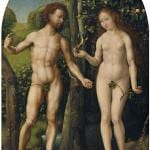 November 20, 2019
Q & A: Catholic Sexual Morality and Contraception
Next Post 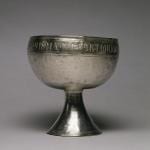