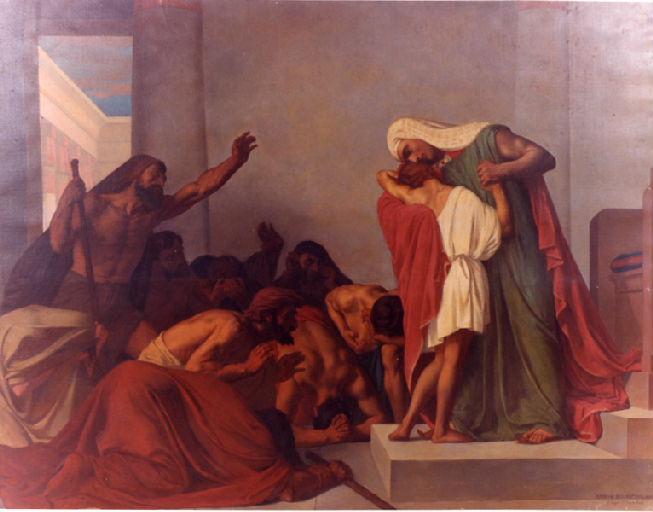 Acts 16:29-31 (RSV) And he called for lights and rushed in, and trembling with fear he fell down before [prospipto] Paul and Silas, [30] and brought them out and said, “Men, what must I do to be saved?” [31] And they said, “Believe in the Lord Jesus, and you will be saved, you and your household.”

Paul and Silas issue no rebuke or clarification: that they were but men. Proskuneo doesn’t appear (the word that would prove it was attempted worship or adoration). This is, then, arguably an instance of veneration of Paul and Silas, due to the supernatural event that showed them to be very special men. Prospipto is also used of worship of Jesus in five passages (Mk 3:11; 5:33; 7:25; Lk 8:28, 47). But where men are involved, the meaning is honor, or veneration.

Daniel 2:46-48 Then King Nebuchadnez’zar fell upon his face, and did homage to [cegid] Daniel, [KJV: “worshipped Daniel”] and commanded that an offering and incense be offered up to him. [47] The king said to Daniel, “Truly, your God is God of gods and Lord of kings, and a revealer of mysteries, for you have been able to reveal this mystery.” [48] Then the king gave Daniel high honors and many great gifts,

The king was venerating or honoring God through Daniel, as is evident by his words. This is the sort of principle elaborated even by Martin Luther: “Thus, too, I would solve the question about adoring and invoking God dwelling in the saints. It is a matter of liberty, and it is not necessary either to do it or not to do it. To be sure, it is not so certain that God has His dwelling in many men as that He is present in the sacrament, but we do read in I Corinthians [footnote: 1 Cor 14:24-25] that an unbeliever will fall on his face and worship God in the saints, if he hears them prophesying; . . . what do we do when we “prefer one another in honor,” except honor and adore God in ourselves? Let it be free, then, to call upon God in man or out of man, in creatures or out of them, for “I fill heaven and earth,” saith the Lord.” (Letter to Paul Speratus, 13 June 1522)

Genesis 42:6 Now Joseph was governor over the land; he it was who sold to all the people of the land. And Joseph’s brothers came, and bowed themselves [shachah] before him with their faces to the ground.

Genesis 43:26-28  When Joseph came home, they brought into the house to him the present which they had with them, and bowed down [shachah] to him to the ground. [27] And he inquired about their welfare, and said, “Is your father well, the old man of whom you spoke? Is he still alive?” [28] They said, “Your servant our father is well, he is still alive.” And they bowed their heads and made obeisance [shachah].

1 Samuel 24:8 Afterward David also arose, and went out of the cave, and called after Saul, “My lord the king!” And when Saul looked behind him, David bowed with his face to the earth, and did obeisance [shachah]. 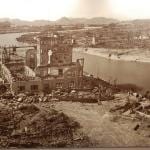 March 4, 2019
Nuclear Bombing of Japan vs. Just War Ethics (Part I)
Next Post 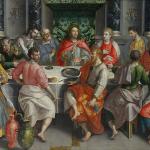 March 5, 2019 Did Jesus' "Hard Saying" (Jn 6) Make Disciples Leave?
Recent Comments
0 | Leave a Comment
"He says he's an atheist, but argues like a fundamentalist. Same old same old."
Dave Armstrong Did Moses Exist? No Absolute Proof, ..."
"Yes, it is summed up nicely in your observation “Scratch an atheist find a fundamentalist”. ..."
Jim Dailey Did Moses Exist? No Absolute Proof, ..."
"Yes, exactly! Just philosophically we can defend a general theism (without getting into Christianity) by ..."
Heretics Beware Problem of Evil & of Good: ..."
"You have written well about Erasmus. But, I don't think that is the view that ..."
Prasanth Erasmus-Luther Correspondence: 1517 to 1534
Browse Our Archives
get the latest from
Biblical Evidence for Catholicism
Sign up for our newsletter
POPULAR AT PATHEOS Catholic
1