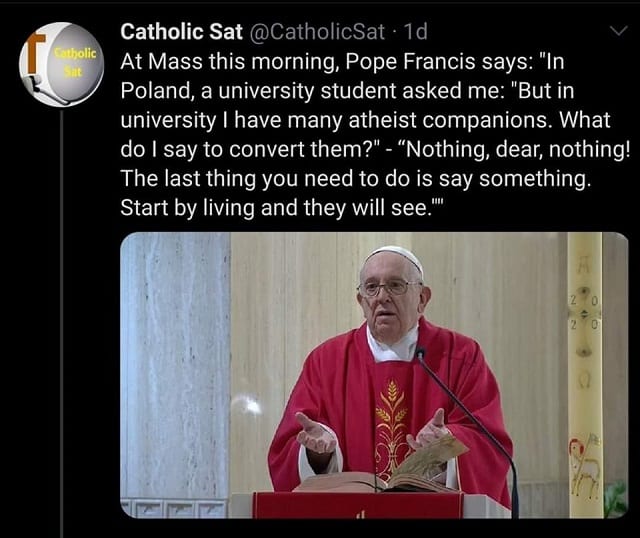 Now, of course, we’ll observe yet again, the nitpicking nabobs of negativism, nattering and bloviating about more alleged “proof” that Pope Francis opposes Catholic evangelism. And so I bring Scripture and analogy to bear (as I often do).

St. Peter was certainly an evangelist and preacher: the first major Christian missionary, in fact, and the one who delivered the first sermon after the outpouring of the Holy Spirit on the Day of Pentecost (Acts 2). Yet he also wrote:

1 Peter 3:1 (RSV) Likewise you wives, be submissive to your husbands, so that some, though they do not obey the word, may be won without a word by the behavior of their wives,

Does it follow that St. Peter is somehow “against” [verbal] evangelism because of this? No. It’s both / and, rather than either / or. It’s a proverbial-type statement that applies in some situations but not all. The classic couplet of seemingly contradictory proverbs is the following:

They don’t “contradict” because proverbs, by nature, are broad, general statements that presuppose the existence of exceptions. Thus, one piece of advice applies in one specific situation; the other does to a different situation. We must exercise discernment as to which one applies when.

1 Peter 3:15 but in your hearts reverence Christ as Lord. Always be prepared to make a defense to any one who calls you to account for the hope that is in you, yet do it with gentleness and reverence;

The two sentiments are completely harmonious. So, for example, the husband in 1 Peter 3:1 might directly ask his wife why she has hope and faith: on what basis? Then she has a golden opportunity to apply apologetics and the advice of 1 Peter 3:15. But one must apply wisdom and prudence as to how to evangelize, and when.

St. Paul held precisely the same view. We know that he was an evangelist (arguably the greatest of all time). That need not be proven, for anyone with the slightest acquaintance with the New Testament. He highlights the necessity of love above all things:

This love is not opposed to evangelism, which is also an act of love:

2 Timothy 4:2-5 preach the word, be urgent in season and out of season, convince, rebuke, and exhort, be unfailing in patience and in teaching. [3] For the time is coming when people will not endure sound teaching, but having itching ears they will accumulate for themselves teachers to suit their own likings, [4] and will turn away from listening to the truth and wander into myths. [5] As for you, always be steady, endure suffering, do the work of an evangelist, fulfil your ministry.

St. Paul also explains the principle of prudence, or acting in accordance with the situation, and the particular mental / emotional / intellectual place that specific people are in, which can and does vary:

In the same way, Pope Francis is not against evangelism or apologetics or preaching or promulgation of the Christian faith by various means of verbal and intellectual teaching. He tweeted on 3 January 2020: “Salvation is in the name of Jesus. We must testify to this: He is the only Saviour.” He simply (frequently) emphasizes and highlights this other aspect: the primacy of love and of nonverbal personal witness, that ought to always lie behind all such preaching: just as St. Peter and St. Paul did. Paul wrote about not only what he taught, but also about what others could “see” in his behavior (i.e., his witness and godly example):

Philippians 4:9 What you have learned and received and heard and seen in me, do; and the God of peace will be with you.

Likewise, our Lord Jesus in the Sermon on the Mount:

Matthew 5:14-16 “You are the light of the world. A city set on a hill cannot be hid. [15] Nor do men light a lamp and put it under a bushel, but on a stand, and it gives light to all in the house. [16] Let your light so shine before men, that they may see your good works and give glory to your Father who is in heaven.”

1 Peter 2:12 Maintain good conduct among the Gentiles, so that in case they speak against you as wrongdoers, they may see your good deeds and glorify God on the day of visitation.

Just as we look through all of Peter’s and Paul’s writings and observe their behavior, to see that they are evangelists, likewise, we must do that with Pope Francis, rather than make rash judgments based on statements isolated and taken out of context. I and others have shown again and again that he is not against evangelism and missions:

When Pope Francis rips ‘proselytism,’ who’s he talking about? He really may not be talking about, or to, Catholics at all (John L. Allen, Jr., Crux, 1-27-15)

Francis: Evangelize by Example, not Pushing Your Faith on Others (Fr. Matthew P. Schneider, Through Catholic Lenses, 12-23-19)

Despite this overwhelming evidence, the increasingly fanatical and extremist Archbishop Carlo Maria Viganò, in an interview on 29 March 2020 with the rabidly reactionary Remnant (unfortunately, just missing April Fools’ Day), stated:

[T]he current Papacy has completely eliminated any form of apostolate, and says the Church must not perform any missionary activity, which it calls proselytism. . . .

The religious relativism which was brought in with Vatican II led many people to believe that the Catholic Faith was no longer the only means to salvation, or that the Blessed Trinity was the Only True God.

Sheer nonsense! Lies! Note that he not only lies (without excuse) about the Holy Father, but also about an ecumenical council. This poor man my literally be senile or mentally ill: so extreme and unconnected with reality has his rhetoric become.

The pope (and I enthusiastically agree with him, as an apologist and evangelist myself) is against the extremist position that apologetics and evangelism should be the goal and substance of every encounter between a believer and non-believer, and virtually the sum total of the Catholic faith. I’ve written similarly:

Bottom line: it’s wrong to always verbally evangelize and also equally wrong to never do so. There is a “golden mean”: as so often in life and spirituality. We must evangelize and bear witness with love, in accordance with the demands of the particular situation. That is Pope Francis’ true position, and that of St. Peter and St. Paul, and I seek with all my effort to make it my own as well.

The irony is that it is absurdly made out that Pope Francis is supposedly an anti-traditionalist and flaming theological liberal and dissident, when in fact, again and again (as presently) it is seen that he is very deeply, profoundly steeped in the biblical and traditional Catholic worldview. It is his critics, who (ironically) seem not to be: since they miss so many things that are obvious in Scripture, if only one studies it deeply enough and (all-importantly) is open to accepting and applying its teachings. 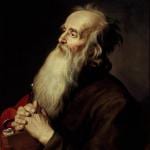 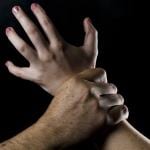