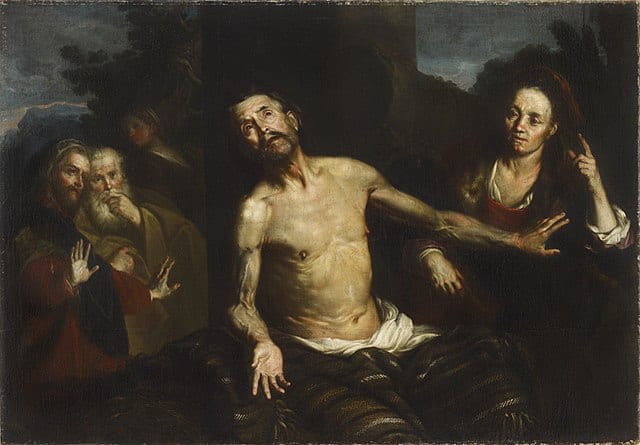 204.
Job 2: 7 So went Satan forth from the presence of the LORD, and smote Job with sore boils from the sole of his foot unto his crown.

Job 42: 10 And the LORD turned the captivity of Job, when he prayed for his friends: also the LORD gave Job twice as much as he had before. 11 Then came there unto him all his brethren, and all his sisters, and all they that had been of his acquaintance before, and did eat bread with him in his house: and they bemoaned him, and comforted him over all the evil that the LORD had brought upon him

Q: Who brought Job’s sufferings on him?

This is a very clear and straightforward example of God permitting a thing (God’s permissive will, as opposed to His perfect will), while the Bible says that He did it; see also Job 2:3: “. . . you moved me against him, to destroy him without cause.” It’s the Hebraic expression of God’s providence, and (technically) of anthropomorphism, or condescending to the limited understanding of man by explaining things about God in a non-literal fashion. For more about that, see my paper:  Anthropopathism and Anthropomorphism: Biblical Data (God Condescending to Human Limitations of Understanding).

If we want to discover the literal truth of what was going on at a far deeper spiritual level, the beginning of the book explains it, in its narrative. God permitted Satan to afflict Job:

Job 2:6 And the LORD said to Satan, “Behold, he is in your power; only spare his life.”

Again: sometimes the Bible states that “God did x,” but what it really means at a deeper level is that “God in His providence did not will x, but rather, permitted it in His omniscient providence, for a deeper purpose.”

I have explained the same sort of (analogous) thing in the case of the Bible saying that “God hardened Pharaoh’s heart” which — when closely analyzed — is really Pharaoh hardening his own heart, and God permitting it in His providence. Thus the Bible says (in this specific sense) that God did it rather than Pharaoh. See: God “Hardening Hearts”: How Do We Interpret That? For example:

Exodus 4:21 And the LORD said to Moses, “When you go back to Egypt, see that you do before Pharaoh all the miracles which I have put in your power; but I will harden his heart, so that he will not let the people go.

Pharaoh Hardening His Own Heart

Exodus 8:32 But Pharaoh hardened his heart this time also, and did not let the people go.

Exodus 9:34 But when Pharaoh saw that the rain and the hail and the thunder had ceased, he sinned yet again, and hardened his heart, he and his servants. (cf. 9:7, 35)

In other words, when Scripture describes God as hardening Pharaoh’s heart, it is non-literal, and means that He permitted him to harden himself, in his own will. But when it describes Pharaoah as the cause, it’s literal; hence, no logical contradiction, because they are different senses.

A second analogous example is God being described as killing King Saul, when in fact Saul committed suicide:

1 Chronicles 10:13-14 So Saul died for his unfaithfulness; he was unfaithful to the LORD in that he did not keep the command of the LORD, and also consulted a medium, seeking guidance, [14] and did not seek guidance from the LORD. Therefore the LORD slew him, and turned the kingdom over to David the son of Jesse.

The (real) prophet Samuel had appeared to Saul after he sought a medium, and proclaimed to him God’s judgment and impending death:

1 Samuel 28:16-19 And Samuel said, “Why then do you ask me, since the LORD has turned from you and become your enemy? [17] The LORD has done to you as he spoke by me; for the LORD has torn the kingdom out of your hand, and given it to your neighbor, David. [18] Because you did not obey the voice of the LORD, and did not carry out his fierce wrath against Am’alek, therefore the LORD has done this thing to you this day. [19] Moreover the LORD will give Israel also with you into the hand of the Philistines; and tomorrow you and your sons shall be with me; the LORD will give the army of Israel also into the hand of the Philistines.”

In other words, the Lord had withdrawn His usual protection of the Israelites in battle (metaphorically described as “the LORD will give Israel also with you into the hand of the Philistines”). Protection only applied when the king and his followers were obedient to God’s commands. If they weren’t, they were on their own and were usually defeated. So in this way, yes: God in a sense “killed” Saul. But in a more literal sense, on the human level, he was severely (perhaps mortally) wounded by the Philistine archers (1 Sam 31:3), then decided to fall on his own sword. The most immediate causes were the archers and Saul himself. In any event, its not a contradiction once the different senses intended are understood.

As a third analogy, St. Paul in Romans 1 talks about people rebelling against God and becoming more and more “senseless” and of a “base mind”. The text goes back and forth between asserting that people did so in their free, obstinate wills, and also that God “gave them up.” Again, it’s the language of God’s permissive will and providence. But the primary cause and fault clearly lies with the wicked human beings, who chose to be so:

Romans 1:18 For the wrath of God is revealed from heaven against all ungodliness and wickedness of men who by their wickedness suppress the truth.

Romans 1:21  for although they knew God they did not honor him as God or give thanks to him, but they became futile in their thinking and their senseless minds were darkened.

Romans 1:24-26 Therefore God gave them up in the lusts of their hearts to impurity, to the dishonoring of their bodies among themselves, [25] because they exchanged the truth about God for a lie and worshiped and served the creature rather than the Creator, who is blessed for ever! Amen. [26] For this reason God gave them up to dishonorable passions. . . .

Romans 1:28 And since they did not see fit to acknowledge God, God gave them up to a base mind and to improper conduct.

Romans 1:32 Though they know God’s decree that those who do such things deserve to die, they not only do them but approve those who practice them.

This is biblical thought. But not one in a thousand anti-theist atheist Bible bashers would have ever become familiar with this particular type of ancient Near Eastern Hebrew thinking. Nor would (sadly) one in a hundred Christians (if even that many). This is why we apologists do what we do! We’re here to educate and assist believers in better understanding the Bible and their Christian faith, and to demonstrate to atheists that their estimate of the ancient Hebrews as clueless idiot-troglodytes is infinitely far off the mark. 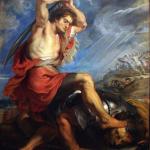 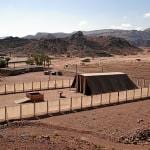