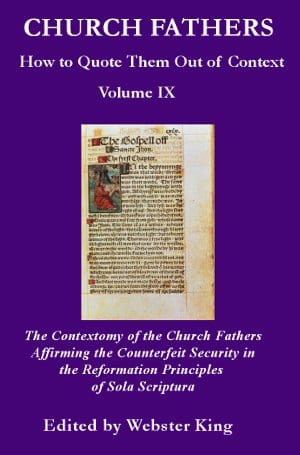 I shall be examining (in this series of papers) several Church fathers that Webster and King bring up, and documenting that they rejected sola Scriptura. I’ve already done this documentation with regard to Augustine, Athanasius, John Chrysostom, Jerome, Ambrose, Irenaeus, Justin Martyr, Clement of Alexandria, Hippolytus, Dionysius, Basil the Great, Cyril of Jerusalem, Theodoret, Gregory of Nyssa, Tertullian, Origen, Gregory Nazianzen, Epiphanius, Lactantius, Cyprian, Papias, Hilary of Poitiers, Cyril of Alexandria, Pope St. Gregory the Great, and John Damascene.

These are the writings which the Fathers included in the canon, and on which they desired the affirmations of our faith to be based. (Commentary on the Apostles’ Creed, 38) [p. 80]

[T]he truth of this is guaranteed for us by numerous testimonies in Holy Scripture. (Commentary on the Apostles’ Creed, 33) [p. 80]

All of this is simply material sufficiency, which poses no problem at all for Catholics or our rule of faith (per the explanation of several past installments). As always, we have to dig much further to see what a given Church father believes about the rule of faith. Webster and King persistently (and we must sadly, say, dishonestly) systematically refuse to do this. If they did, they’d have to give up their entire project in the three volumes, as a pack of falsehoods in its conclusion, so the stakes are high!

Rufinus believed in the infallibility of the Church:

I as yet remain in ignorance on the subject, except so far as this, that the Church delivers it as an article of faith that God is the creator of souls as well as of bodies. (Apology sent to Anastasius, Bishop of the City of Rome, 6)

Where can simple faith and innocence be safe if they are not protected in the Church? (Apology sent to Anastasius, Bishop of the City of Rome, 7)

As for me, I declare in Christ’s name that I never held, nor ever will hold, any other faith but that which I have set forth above, that is, the faith which is held by the Church of Rome, by that of Alexandria, and by my own church of Aquileia; and which is also preached at Jerusalem; and if there is any one who believes otherwise, whoever he may be, let him be Anathema. (Apology sent to Anastasius, Bishop of the City of Rome, 8)

This is that holy Church which is without spot or wrinkle. . . . this Church which keeps the faith of Christ entire, . . . (Commentary on the Apostles’ Creed, 39)

Rufinus accepted the sublime, infallible authority and indefectibility of the Apostolic See of Rome:

Rufinus held to infallible tradition, preserved by the Church:

And therefore it seems proper in this place to enumerate, as we have learned from the tradition of the Fathers, the books of the New and of the Old Testament, which, according to the tradition of our forefathers, are believed to have been inspired by the Holy Ghost, and have been handed down to the Churches of Christ. (Commentary on the Apostles’ Creed, 36)

These are the traditions which the Fathers have handed down to us, which, as I said, I have thought it opportune to set forth in this place, for the instruction of those who are being taught the first elements of the Church and of the Faith, that they may know from what fountains of the Word of God their draughts must be taken. (Commentary on the Apostles’ Creed, 38)

. . . in accordance with the traditional and natural meaning of the Creed . . . (Commentary on the Apostles’ Creed, 1)

Our forefathers have handed down to us the tradition, that, after the Lord’s ascension, when, through the coming of the Holy Ghost, tongues of flame had settled upon each of the Apostles, that they might speak diverse languages, so that no race however foreign, no tongue however barbarous, might be inaccessible to them and beyond their reach, they were commanded by the Lord to go severally to the several nations to preach the word of God. . . . And for this reason, the tradition continues, the Creed is not written on paper or parchment, but is retained in the hearts of the faithful, that it may be certain that no one has learned it by reading, as is sometimes the case with unbelievers, but by tradition from the Apostles. (Commentary on the Apostles’ Creed, 2)

[I]f, I say, we have intelligently followed these in succession in accordance with the rule of the tradition hereinbefore expounded, we pray that the Lord will grant to us, and to all who hear these words, that having kept the faith which we have received, having finished our course, we may await the crown of righteousness laid up for us, . . . (Commentary on the Apostles’ Creed, 48)

Clement, the disciple of the Apostles, who was bishop of the Roman church next to the Apostles, was a martyr, wrote the work which is called in the Greek ᾽Αναγνωρισμός, or in Latin, The Recognition. In these books he sets forth again and again in the name of the Apostle Peter a doctrine which appears to be truly apostolic . . . There are also some other things inserted into his books which the church’s creed does not admit. I ask, then, what we are to think of these things? Are we to believe that an apostolic man, nay, almost an apostle (since he writes the things which the apostles speak), one to whom the apostle Paul bore his testimony in the words, With Clement and others, my fellow labourers, whose names are in the book of life was the writer of words which contradict the book of life? . . . in the case of these very reverend men and doctors of the church; we have found it impossible, I say, to believe that those reverend men who again and again have supported the church’s belief should in particular points have held opinions contradictory to themselves. (Epilogue to Pamphilus the Martyr’s Apology for Origen)

Rufinus accepted popes as the “rulers” of the Church, with succession from St. Peter:

There is a letter in which this same Clement writing to James the Lord’s brother, gives an account of the death of Peter, and says that he has left him as his successor, as ruler and teacher of the church; and further incorporates a whole scheme of ecclesiastical government. (The Preface to the Books of Recognitions of St. Clement)

Finally, Rufinus reports the following opinion and action of others, but it may very well have been his own belief also:

Putting aside all Greek literature, they [St. Basil and St. Gregory] are said to have passed thirteen years together in studying the Scriptures alone, and followed out their sense, not from their private opinions, but by the writings and authority of the Fathers. (Church History, 2:9)

Summary: Rufinus rejected sola Scriptura & believed in the infallibility of the Church and the See of Rome, infallible tradition, as well as Petrine primacy and historical papal succession from St. Peter.

March 3, 2021 John Cassian (d. 435) vs. Sola Scriptura
Recent Comments
0 | Leave a Comment
"This reminds me of a priest that bashed the Pope during a homily. I went ..."
Adam Charles Hovey Fr. Peter Stravinskas & Irrational Pope ..."
"Thanks Dave for all your work defending Pope Francis. May God bless you for it."
Gilbert Fritz Fr. Peter Stravinskas & Irrational Pope ..."
"Thanks! Best I can tell, his main point is that we should know the date ..."
Dave Armstrong Resurrection Debate #2: Date of Jesus’ ..."
"I do not understand the point of Mr. Alter's objection. Is he denying that Jesus ..."
Paul Hoffer Resurrection Debate #2: Date of Jesus’ ..."
Browse Our Archives
get the latest from
Biblical Evidence for Catholicism
Sign up for our newsletter
POPULAR AT PATHEOS Catholic
1